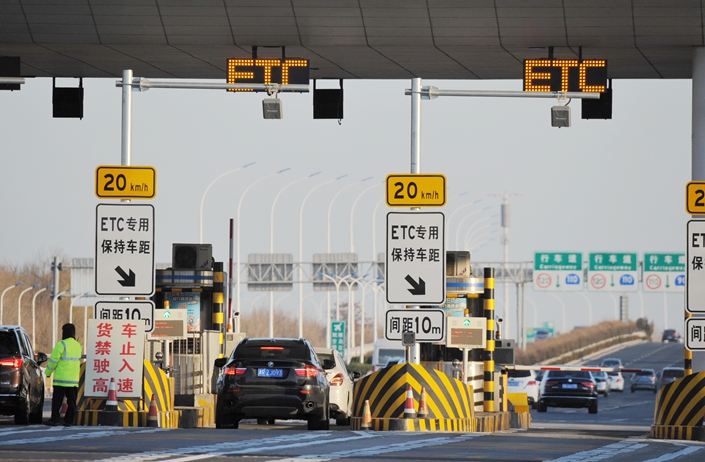 The rollout of electronic toll collection (ETC) across China’s highways has triggered unexpected ripple effects that are yet to smooth out.

On Jan. 1, 487 road toll stations in 29 province-level areas were shut down and replaced with wireless ETC systems, which automatically collect the tolls from drivers via a radio transponder fitted to the vehicle.

The government said that ETC would unify toll collection under one network, keep roads clear for drivers, and allow drivers maintain the same speed throughout their journeys. But teething problems remain.

Some toll stations have become even more congested than before, as some ETC-equipped car owners still prefer to go through the residual manned toll booths. In addition, some owners of ETC-ready cars have been overcharged or left unable to see how much money has been deducted from their linked accounts. At times of extreme congestion, some highway management companies have even been forced to open the floodgates and let drivers through toll-free, incurring considerable financial losses.

When we’ve stopped licking our wounds over these pitfalls, we ought to reflect on why a policy intended to reduce road congestion and bring greater convenience to drivers has ended up being a widespread source of public complaint.

To start with, getting rid of highway toll stations isn’t simply a matter of tearing down a few kiosks. It’s a complex piece of systems engineering.

According to the central government, the process involves speeding up four concrete tasks: the construction and improvement of highway toll systems; the promotion and application of “frictionless” electronic payment collection; the improvement of associated laws, regulations, and policies; and the rollout of debt stock replacement on the government’s tolled highways. If cracks appear in any one of these steps, it will impact the reform’s effectiveness.

The widespread castigation that has so far greeted efforts to eliminate manned toll stations largely reflects the rollout’s lack of attention to detail and an underlying shoddy attitude toward the methodology of reform. The idea is right, the intentions are good — but it’s much harder to do the job well enough to meet the reform’s aims.

The history of China’s reform and opening-up has taught us that whenever changes disrupt people’s daily lives, they can have serious consequences. Although traffic congestion is hardly a new phenomenon in China and a few overcharged drivers might not seem all that bad, these small irritations can build into much broader public dissatisfaction with the reforms.

Perhaps an overview of the ETC reforms is necessary here. In May 2018, the State Council — China’s cabinet — announced its decision to push forward the elimination of manned toll stations. That was followed by a 2019 government work report that proposed a virtually total phaseout within two years. Then, in May, the State Council published an implementation strategy saying that all such toll stations would be removed from China’s roads by Jan. 1.

As we can see, the plan was dramatically fast-tracked in the space of a few years. But the facts prove that speed rarely goes hand in hand with quality.

Reforms can’t take place behind closed doors; they have to fully safeguard the public’s right to know. The aforementioned phaseout is only part of this tranche of reforms, which also touches on adjustments to how transport fees are calculated. Yet previous close readings of the policy generally stressed the abolition of toll stations, with particular emphasis on the progress of the related infrastructure buildout.

However, with the exception of a few individual provinces, none have so far placed fare adjustments for passenger cars high on the agenda. If the public ends up feeling that the implementation of this policy runs counter to their expectations, they will start to wonder what the point of the whole thing is. If that coincides with frequent software issues like “invisible” fees, overcharging, or inconsistent levies on the same roads, drivers will feel extremely unhappy.

An oft-quoted adage of China’s reform-era experience is “crossing the river by feeling the stones.” For that to happen, we must experiment as much as we can. Top-down designs must not be immune from bottom-up feedback. Unlike finance and other drivers of overall reform, the ETC transition can accomplish that. Although some provinces trialed phaseouts of manned toll stations prior to the reform’s large-scale rollout, the problems were not fully revealed and the pilot projects were hardly a success.

Successful reforms are ultimately delicate balancing acts between the interests of all concerned parties. From the government’s overall design to specific local-level implementation, from each province’s transport authorities to the operation of each individual road, from the rollout of ETC hardware to fare-charging software systems, and from policy deployment to public notices, there are intricate and conflicting interests between the relevant entities.

If reforms sacrifice the interests of certain groups, they will inevitably receive a negative reaction. Of course, these interests are not referring to futile attempts by certain government departments to stymy reform by seeking private gain or to local interests. This round of ETC reform has not paid enough attention to the voices of highway operators. They think that there are enough modern technologies to realize the reform’s vision, not just the part concerning ETC. Even if the whole country ran on ETC, it should avoid a hurried rollout. However, by now they are physically and mentally exhausted. In addition, they’ve not only shouldered the costs of multibillion-yuan infrastructure upgrades, but have become the reluctant whipping boys for the drivers’ anger.

It might seem churlish to point out these criticisms, but it’s actually an attempt to sympathetically understand the realities of the situation. Reforms rarely work perfectly from the start, but the important thing is that once it becomes clear that what was imagined is not what has been delivered, we patch it up in a timely manner.

A comparable experience might be the exchange rate reform of 25 years ago. Officials deliberated the plan at length and tried to make it watertight, but unforeseen problems still occurred. On Dec. 29, 1993, China’s central bank issued a notice to suspend the issuance of foreign exchange certificates. The public mistakenly took this to mean that the central bank was also effectively prohibiting the movement of foreign exchange certificates already in circulation. The following day, people all over the country started madly using the certificates. On Dec. 31, the central bank issued a notice, which was subsequently widely publicized through the media, explaining that the already-issued certificates could be used as normal. The situation rapidly stabilized.

ETC reform shows much more dissonance between the plan and the reality than foreign exchange certificates. Problems have arisen, but the relevant government departments haven’t been able to allay drivers’ concerns quickly enough. Mistakes have just led to more mistakes, and we should take profound lessons from them.

Compared to China’s momentous systemic reforms, ETC reform is a mere interlude. But it has taken on outsized significance because it is so tightly bound up with people’s lives. It isn’t easy to ignore what it reveals about reform methodology. Recently, the Ministry of Transport has held a succession of news conferences notifying people of its progress in dealing with the issues and promising to “resolve the current ongoing issues as early and quickly as possible.” The effects of the tweaks to policy will gradually become visible, but the anxiety of drivers and highway operators has not yet abated.

The relevant departments must not merely attribute these lessons to insufficient technological safeguards, but should also use them to promote a spirit of broader systemic reform akin to the 1980s drive to keep the public abreast of significant developments and involve them in resolving issues. In short, reform can’t only rely on elegant top-level design, but also high-quality implementation.