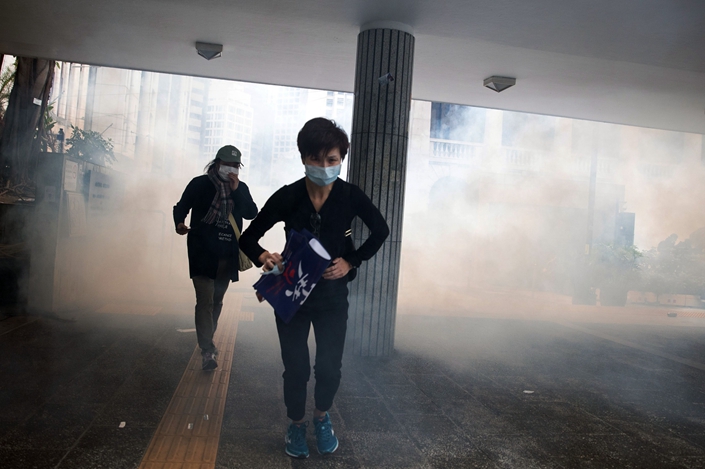 Moody’s cited a degree of “inertia” characterizing the legislative and executive branches of government in the statement, as it lowered the rating to Aa3 from Aa2. The ratings agency also changed the outlook to “stable” from “negative.”

“The absence of tangible plans to address either the political or economic and social concerns of the Hong Kong population that have come to the fore in the past nine months may reflect weaker inherent institutional capacity than Moody’s had previously assessed,” the ratings company wrote in a statement.

Hong Kong has been rocked by pro-democracy protests and clashes between demonstrators and the police which have broken out regularly since June. The economy contracted sharply in the third quarter, pushing the city into a recession, as the often-violent clashes led to a plunge in the number of tourists, hurt consumption, and disrupted business operations.

The Hong Kong government strongly disagreed with Moody’s assessment and was “deeply disappointed” by the decision to downgrade.

“Moody’s rating falls way out of line with Hong Kong’s sound credit fundamentals,” a government spokesman said in a statement early Tuesday. “Our fiscal performance and external positions have long been amongst those of the top-rated economies and serve as a strong buffer for Hong Kong to withstand shocks.”

Banks in Hong Kong are “well-cushioned given their strong capital base, sound liquidity and healthy asset quality,” while initial public offerings and bond financing activities continue despite the unrest, the spokesman added.

The move by Moody’s marked the first downgrade by the agency of the city’s rating since May 2017. Fitch Ratings downgraded it in September to AA from AA+ with a negative outlook.

A government report showed Monday that Hong Kong’s unemployment rate rose to 3.3% in the three months ending December, compared with just 2.8% in the months before the protests kicked off in June.

The local economy is stuck in a “vicious cycle” whereby scenes of protest deter tourist arrivals and lower earnings and employment in the retail and hospitality sector, creating further wage cuts and job losses, said Iris Pang, a greater China economist at ING Bank. Because of Hong Kong’s low debt-to-GDP ratio, the downgrade was likely more significant for corporate borrowers, she added.

“The persistent social unrest reflects that there are deep-seated problems in society in Hong Kong, on which the government will conduct an independent review soon,” the spokesman said, adding the administration is engaging people from all walks of life to find a way out for the city.