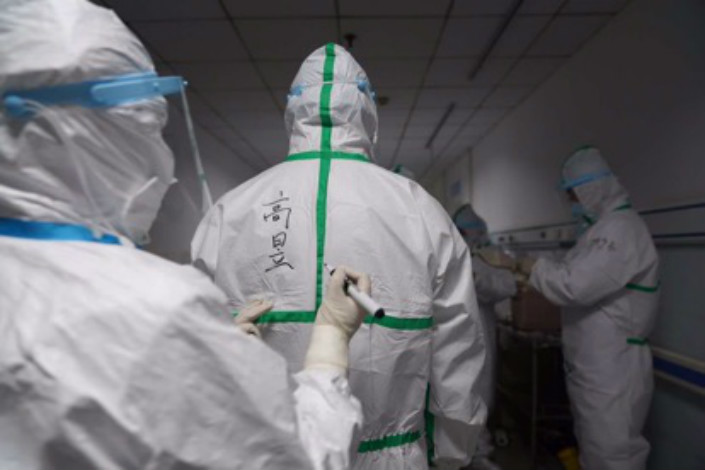 Caixin reporters, under full protective gears, write down each other’s name on the back to help identify. Photo: Caixin

Social media posts circulated online describing Wuhan, the city locked down because of the virus, as ‘hell on earth’ – saying things are out of control, that medical workers don’t have enough food supplies, and that desperate patients had even attacked doctors by ripping open their protective gowns.

None of these things were true.

Overall, the city still operates in an orderly fashion. But shortages of medical devices and the fact that most local medical staff are incredibly overloaded are indeed severe problems. And most worryingly of all is the continuous spread of the virus.

Two Caixin reporters and I were conducting interviews in hospitals most of the day. In the evening, in the spirit of the New Year, we drove for quite a while in Wuchang, in many ways the urban heart of the city, and found one restaurant before it closed its door. There we had our new year dinner, and toasted everyone, wishing them a good Year of Rat.

At midnight, we were at the airport. Additional resources and medical staff had started to land, coming from around the country. All hopeful they could join the fight to combat the virus and help Wuhan emerge faster out of the disaster.

Back in our hotel, we found protective gear waiting for us kindly donated by people we don’t even know, sent from around the country.

The three of us are the only customers of this hotel. They keep operating just for us, and put a small gift of fruit in our room - it’s the new year after all.

Gao Yu is the deputy managing editor of Caixin Media