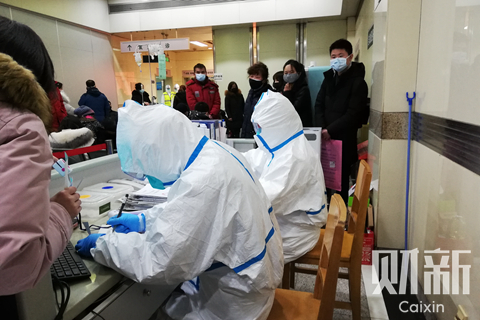 Senior Chinese officials are calling for a return to pre-holiday levels of medical supply production to meet the needs of those at the center of the coronavirus epidemic. But they acknowledged that even at full capacity supply won’t match demand.

Senior officials from China’s National Health Commission and the Ministry of Industry and Information Technology (MIIT) addressed widely reported shortages of medical equipment in a press conference Sunday held by the State Council’s Information Office. They described what national resources are being allocated to fight the spread of the new strain of coronavirus, also known as nCoV-2019.

Despite efforts to increase production, China’s output of protective medical gear is at only 40% of full capacity because of the Lunar New Year holidays, according to Wang Jiangping, vice minister of the MIIT.

Of the roughly 20 types of supplies health authorities in Wuhan, Hubei province, asked of the central government Thursday, protective equipment such as masks had the direst need, Wang said.

The virus, which induces pneumonia, is thought to have originated in Wuhan, and 52 of the 56 confirmed deaths caused by the virus have taken place in Hubei.

However, even at full capacity, domestic companies may not be able to satisfy the demand from China’s most heavily afflicted region.

The vice minister said provincial leaders requested around 100,000 medical protective gowns a day, more than three times the total daily output of China’s 40 licensed manufacturers. Meanwhile, China can make 50,000 outfits a day for export, but they do not meet Chinese standards and aren’t licensed for local use.

“To convert them for domestic sale will require a bit of time,” Wang said. “We must at all costs return to work and manufacturing and raise our output.”

The official also called on China’s central government to dip into its “reserves,” although he did not elaborate on what this entailed. He also said the country must review its standards to allow medical outfits bound for Europe and the U.S. to be used domestically in some situations. He also said international procurement efforts were underway and that 220,000 gowns have been purchased.

To assist in Hubei’s efforts to fight the spread of the virus, China has earmarked 1 billion yuan ($144 million), according to Ma Xiaowei, head of the country’s National Health Commission (NHC).

In addition to the 450 military medical personnel already on the scene, the NHC has dispatched 900 medical staff, with 1,600 more to be deployed “today and tomorrow,” the official said. A thousand more health-care workers are on standby, he said.

As part of the nation’s top Level I public health emergency response declared in 30 of China’s provincial-level jurisdictions, the country will track individuals with Wuhan travel histories.

Every day before 8 a.m., the NHC will also report the previous day’s epidemic data and include expert analysis, Ma told reporters.

“The medical personnel of Hubei province, especially those in Wuhan, have been at the front lines for a long time,” he said. “To provide critical care to patients and control the epidemic, they’ve spared no effort.”