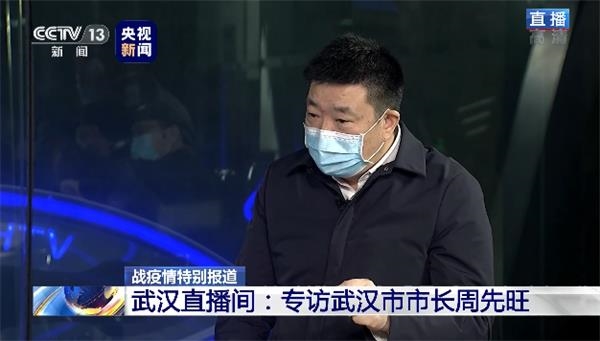 Zhou has been leading the fight at the epicenter of the disease, which has killed more than 80 people in China. His comment was the first response from the local government to growing public calls across China to hold officials accountable for their actions in the early stages of the outbreak.

Several lower-level officials across the country have been suspended from duties for flaws in handling disease control, including Tang Hu, head of a district health authority in Yueyang, Hunan province, and Yao Zhongjing, a district market regulator at Jinan, Shandong province.

In an unusual, 50-minute interview Monday with state broadcaster CCTV, Zhou said that “not only had we not revealed the information [of the coronavirus outbreak in the city] in a timely manner, but we had not used much effective information to improve our work.”

However, the mayor said he was complying with the rules for information disclosure under the country’s infectious disease prevention law.

According to China’s Prevention and Treatment of Infectious Diseases Law, before making an announcement and taking measures, the health administration department under the State Council, China’s cabinet, shall — without delay — report the matter to the State Council for approval.

Zhou did not elaborate on the process, including when the city first reported the disease outbreak to the higher level. A native of Hubei province, Zhou, 57, became mayor of Wuhan in September 2018.

After the State Council held an emergency meeting Jan. 20 and classified the new coronavirus as Class B infectious disease to be managed as Class A, Zhou said, “our work became more active … [being able to] take some tough measures, including closing down the exits of Wuhan and suspending our city’s metro and bus, ferry and outbound coaches.”

More than 5 million people had left Wuhan and about 9 million remain in the city, the mayor said during a Sunday press conference.

In the CCTV interview, Zhou offered his resignation and the resignation of his colleague Ma Guoqiang, the party chief of the city, to take responsibility for closing down the city.

“We closed the door [of the city], which may cut off [the spread of] the disease. However, we will be blamed by history,” Zhou said. “But we think as long as it would be beneficial to the disease control and safety of the people, Ma Guoqiang said that we will take whatever responsibility we need to.”

“If the general public think we were wrong, we will resign,” Zhou said.

The one-on-one interview followed a dramatic press conference held by the Hubei provincial government Sunday evening, in which Zhou and Hubei Governor Wang Xiaodong were speakers.

The live press conference quickly drew fierce criticism on social media of the local government’s capability to fight the disease, as the mayor during the event seemed to be wearing his hygienic mask upside-down and his account of whether medical supplies were sufficient was at odds with the governor’s.

On Monday, in a brief exchange between the mayor and a CCTV reporter after the interview, Zhou confirmed that initially it was one of his deputies — not himself — who was to speak with the national broadcaster.

Asked by the reporter about the last-minute change, Zhou said that as the general public criticized the government for failing to do its work well, “I’ll [take the opportunity to] show it all.”