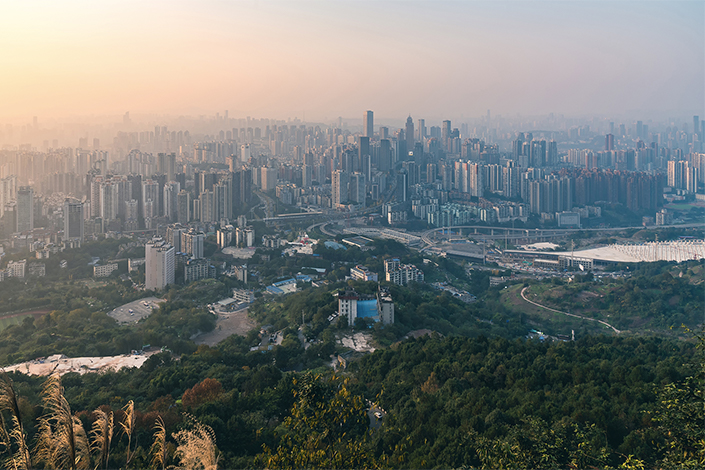 About 210,000 people traveled to Chongqing from Wuhan for the Lunar New Year holiday before Wuhan was locked down on Jan. 23. Photo: VCG

Outside the central province of Hubei, Chongqing is the worst affected city in the ongoing outbreak of a novel coronavirus first identified in Hubei’s capital Wuhan, according to official data.

A sprawling megalopolis of over 30 million people (link in Chinese) along the Yangtze River in southwestern China, Chongqing is the largest Chinese city by area and has numerous direct links to the epicenter of the outbreak.

As of Thursday, Chongqing had 206 confirmed infections (link in Chinese) by the virus. Beijing, Shanghai, Guangzhou and Shenzhen reported 132, 128, 106 and 110 cases respectively.

About 210,000 people traveled to Chongqing from Wuhan for the Lunar New Year holiday before Wuhan was locked down on Jan. 23, accounting for 4.2% of an exodus of 5 million, Tang Wenge, a deputy director of the Chongqing Center for Disease Control and Prevention, told local media (link in Chinese). Some were already symptomatic upon arrival, Tang added.

On Monday, a Hong Kong-based public health professor predicted that Chongqing would continue to bear the brunt of the highly infectious disease beyond Wuhan and its environs in Hubei.

Gabriel Leung, director of the WHO Collaborating Center for Infectious Disease Epidemiology and Control, forecast at a press briefing that the number of new cases confirmed each day in Chongqing is not likely to peak until April or May, shortly after it does in Wuhan, assuming a worst-case scenario without additional measures beyond the Wuhan shutdown. This suggests that the overall epidemic will subside in June or July, based on a model which predicts infections to double every 6.2 days on average in Wuhan.

Millions across China are now working hard to prevent that prediction from coming true. After a fatal delay in disclosing emergence of the virus, forfeiting the crucial first few days to stem its spread, governments across the country have taken proactive or even radical measures to contain it. Bordering Henan province, a primary source of Wuhan’s migrant workers, was a pioneer in using the broadest range of tools to promote awareness, such as adapting operas and broadcasting in local dialects over village loudspeakers. Roads connecting with Hubei have been blocked.

Meanwhile, many cities including Chongqing have scrambled to find and quarantine suspected virus carriers. As of 6 p.m. on Jan. 25, Chongqing authorities had combed through 2.46 million households or 6.05 million people, finding a total of 172 persons suspected to be infected, Zhang Qiang, a senior official of the city’s Communist Party committee, said at a press briefing (link in Chinese) the next day. The authorities aim to detect early, report early, quarantine early and treat early, he said.

Jan.25 was the first day of the Chinese lunar calendar this year. Many Chinese people return to their hometowns for the weeklong Lunar New Year holiday, representing the world’s largest annual human migration. That has made the fight against the virus an incredible challenge. Multiple health specialists said that the next two weeks will be vital to curb the virus’ spread as people return to work after the holidays.

Chongqing, like other regions, set up a dedicated office to oversee the metropolis’ fight against the highly contagious disease. On Tuesday, it issued a notice prohibiting all businesses from reopening until Feb. 10.

Under the shadow of the epidemic, traditional festivities have been cancelled to avoid person-to-person transmission, and the government has asked local residents not to meet up for new year celebrations. Teahouses, restaurants, cinemas and other public places that would normally be packed are now closed.

Despite efforts to prevent the virus from spreading, others outside China may soon experience the same. Leung said more confirmed cases are likely to emerge beyond China, given that megacities like Beijing, Shanghai, Guangzhou and Chongqing are all air transport hubs with many international flights per day.