Reporters’ Notebook: There Shouldn’t Be a Second Wuhan 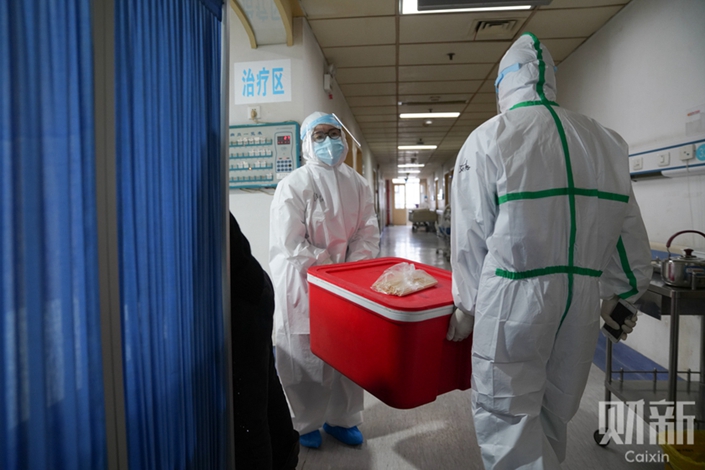 Wang has come under nationwide criticism for errors in his government’s handling of the coronavirus that broke out in its capital city and has infected almost 10,000 people across China as of Thursday morning. But his latest call to action drew attention to a disheartening reality: Wuhan is not the only place in Hubei province pitched in a life-and-death battle against the virus. Nearby cities like Huanggang, 50 miles (80 kilometers) from the capital, took in millions of people from Wuhan before it was locked down, and are now overloaded with afflicted patients. Such places are in the midst of severe shortages of medical supplies and qualified professionals, with potentially infected patients swamping local clinics that cannot confirm whether they carry the virus due to lack of resources.

Huanggang is much less well-known than Wuhan. Nonetheless, it is the second most affected city by far in the fast-spreading contagion, with the highest numbers of confirmed cases, death cases, and daily growth rate of new cases other than Wuhan.

As of Thursday midnight, 5,806 cases and 204 deaths have been reported in Hubei province (link in Chinese). Among them, Wuhan has 2,639 confirmed cases, of which 159 people have died. Huanggang has confirmed 573 cases, of which 12 have died. However, Huanggang’s situation may be much worse than its numbers suggest, as the city may have more than 1,000 cases when taking into account suspected but unconfirmed infections as of Wednesday, according to Governor Wang.

Many patients are simply waiting for the tests needed to confirm whether their symptoms come from the new virus, but resources are either prioritized for Wuhan, or still in transit. Traffic lockdowns and logistics blockages are among the factors that leading to near-total exhaustion of medical supplies in cities like Huanggang.

These shortages were clear before Governor Wang spoke up. Medical workers in Wuhan satellite cities including Huanggang, Jinmen, Xiantao, Ezhou said in interviews with Caixin earlier this week that supplies in their local hospitals would run out in just two or three days if they are not replenished in time.

“We are still hanging in there, possibly for another day or two, but how about the day after tomorrow? By the day after tomorrow, even protection owed to doctors and nurses at the frontline may not be guaranteed.” One medical worker in Huanggang’s Qichun county expressed his fears to Caixin. He was most concerned about the extremely high risk of intra-hospital contagion, as doctors outside the isolation wards were working under only basic protection measures.

In Macheng county, a surgeon told Caixin that although their hospital began stockpiling medical supplies nearly a month ago, the materials had been consumed too fast to accommodate the flood of patients. “Our masks will be used up by tomorrow. There will be none for the day after. So many people on the outside said they would donate, and many medical companies said they were sending supplies, but nothing has arrived.”

How big is the gap? According to an incomplete estimate by hospitals in Huanggang on Monday, the city lacks over 1.7 million N95 masks, over 3.2 million surgical masks, over 95,000 goggles, and at least 270,000 sets of protective clothing.

But as more than a dozen cities in Hubei province are in “lockdown” and the Lunar New Year holiday has further slowed logistics, many supplies are not reaching their destinations. Moreover, donations from the public have to follow winding procedures through philanthropic organizations before being coordinated and allocated by governments and finally reaching places in need, sources working in municipal medical supply control centers told Caixin.

In addition to physical exposure to contagion risks, many medical staff are under tremendous psychological pressure as they “run naked” with the virus.

A source with knowledge of the situation in a top-tier hospital in the city of Xiaogan told Caixin that by Monday, the hospital had only surgical masks, with no goggles or protective clothing left. Medical staff had nothing to protect themselves but two layers of disposable surgical masks. Another source in a hospital in Huanggang’s Qichun county said that when a suspected carrier underwent surgery on the first day of the Lunar New Year, there was only one set of protective clothing for the whole team. Many people conducted the surgery with almost no professional protection, leading one to cry in a corner as they finished the emergency procedure.

Medical shortages aside, local authorities’ accountability is also in question. On Thursday, just one day after Governor Wang’s press conference pledge, state-run broadcaster CCTV interviewed the official in charge of Huanggang’s health commission and asked about the city’s medical capacity. In a video which has since gone viral online and fueled public anger, the official revealed she did not know even basic information about the situation and could not confirm simple statistics. That evening, the official was suspended from her position.

Do not let Huanggang become the next Wuhan. We hope Governor Wang can keep to his word, but Huanggang city and others like it are still struggling on their own for now.