Carmakers Brace for Crisis as Virus Wreaks Havoc in China 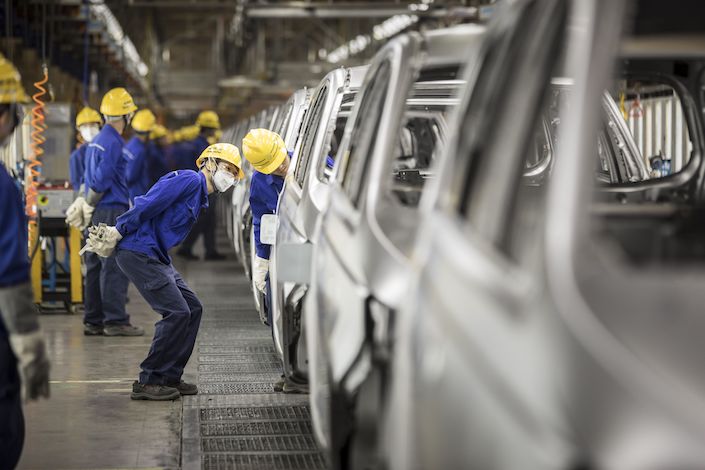 Employees work in the weld shop at the SGMW Baojun Base in Liuzhou. Photo: Bloomberg

The coronavirus outbreak is shaping up to take a heavy toll on the Chinese economy and send ripples through the global auto industry. Though concrete estimates of the eventual financial impact are scarce, signs are emerging that the costs will far outweigh those of the 2003 SARS epidemic, when China’s auto market was one-sixth the size it is today and smaller than that of Japan.

China’s car sales were already heading for the lowest in at least five years before the outbreak forced authorities to lock down the epicenter of Wuhan city and beyond. Now, it’s unclear when consumers will come back to showrooms as 14 provinces and cities that accounted for almost 70% of the country’s economy shut businesses and factories until at least the second week of February.

“The risks are enormous because of the sheer weight of China in the global market and its importance to trade,” said Jean-Louis Sempe, a Paris-based analyst at Invest Securities. “Predicting the seriousness of the epidemic is very difficult, but there’s no doubt the impact could be huge on factories, supply chains and domestic car sales.”

Should passenger-vehicle sales in China fall 20% from last year’s 21.4 million units, that would threaten to end the country’s run as the world’s largest auto market, a rank it’s held for more than a decade.

General Motors Co. and Honda Motor Co. are among the manufacturers with factories in the Wuhan region, and state-owned Dongfeng Motor Corp. is headquartered in the city of about 11 million people.

Nissan Motor Co. and Peugeot-maker PSA Group also have assembly plants in Wuhan or the broader Hubei province and are partners with Dongfeng. Robin Zhu, an analyst at Sanford C. Bernstein & Co., singled out Dongfeng PSA as “by far the most exposed” because of the high proportion of vehicles it makes in the area.

“Investors will need to brace for a slowdown in broader activity levels in China,” Zhu said in a Jan. 27 note. “We expect the Chinese auto industry to endure a traumatic next few months.”

Automakers probably will dial back production by 15% in China this quarter after extending holiday shutdowns because of the virus, supplier Aptiv Plc said Thursday. Aptiv, whose customers include GM and Volkswagen, projected its own production will be down 11% from a year ago.

The government extended the annual Lunar New Year holiday break — with its workplace closures — by several days to curb potential exposure. Tesla was among the companies saying they’re monitoring potential supply-chain interruptions for cars built outside China, as well.

“This will be horrendous in the supply chain,” said Rosemary Coates, a supply chain consultant and executive director of the Reshoring Institute, a nonprofit focused on expanding manufacturing in the U.S. “It’s going to be awful for companies, and it will show in their quarterly reports and global strategy going forward.”

The epidemic comes at a delicate time for the car industry, which also faces sales slumps outside China and pressure to make heavy investments in electric and self-driving cars. Compounding the danger is the overall economic slowdown, with the virus potentially shaving more than 1 percentage point off first-quarter growth in China’s economy.

China is also the world’s biggest market for electric vehicles (EVs). The demand for EVs and traditional premium models will suffer the most because sales of those vehicles are concentrated in the biggest cities, which happen to be the ones most affected by the epidemic, Zhu said.

The effect is being felt far beyond the Wuhan region. Tesla said it expects a potential 10-day delay in production ramp-up at its new Shanghai plant — its first outside the U.S. — because of the government-required shutdown. Chief Financial Officer Zach Kirkhorn said Jan. 29 the delay may also “slightly impact” the company’s profitability this quarter.

GM, Toyota and Volkswagen also closed factories at least through Feb. 9, taking heed from several provinces that advised companies not to resume operations any sooner than the extended holiday break.

Each month of lost production in China would erode operating profit by about 6.1% at Honda and 11% at Nissan, JPMorgan Chase & Co. estimates. The Chinese operations of Japan-based Aisin Seiki Co. and Koito Manufacturing Co. are among the most exposed to a production stoppage, JPMorgan said in a Jan. 30 note.

Wuhan’s links to the global industry were driven home this week in Germany when auto-parts supplier Webasto AG shut its headquarters in the Munich suburb of Stockdorf after at least four staff members became infected following the visit of a Chinese colleague.

Fears about the virus are pressuring foreign governments to repatriate their nationals, and many auto companies have helped with the effort. PSA, Honda and Nissan are evacuating expatriates and their families from the Wuhan area. Most also put limits on travel into China.

While industries such as textiles are able to relocate production quickly, the heavy equipment required in car making means it would take auto manufacturers two or three years to move a plant, said Reshoring Institute’s Coates.

“Moving an auto plant or any highly machined products or any sophisticated kind of products — it’s just not going to happen very fast,” she said. “Even a few days of shutting down a major industrial area like Wuhan is going to affect supply chains around the world.”