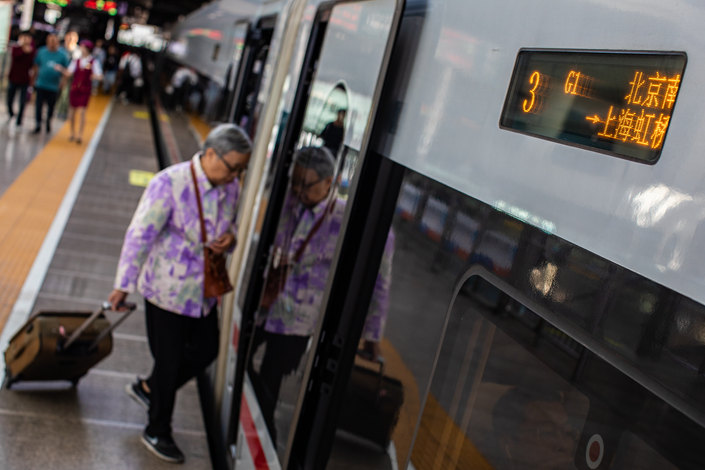 lTrain passengers in China took fewer than 3 million trips from Wednesday to Saturday, with each day’s daily passenger traffic down 73.8% to 78.5% over the period.

For four straight days, daily passenger traffic on China’s railways has been down more than 70% from the same period during the Lunar New Year in 2019, the country’s railway operator reported Saturday, amid the fallout from the coronavirus outbreak.

Train passengers in China took fewer than 3 million trips from Wednesday to Saturday, with each day’s daily passenger traffic down 73.8% to 78.5% over the period, according to data from China State Railway Group Co. Ltd.’s website. The plunge came as authorities extended the holiday and stopped some trains in an effort to contain the deadly virus.

The State Council, China’s cabinet, extended the holiday by three days to Feb. 2, which delayed people from returning to work. The governments of 14 provincial-level regions, including the migrant-heavy Beijing and Guangdong province, further pushed back the date that businesses and schools are supposed to reopen until Feb. 10 to avoid the busiest travel period.

Railway authorities also cut train trips to help control the outbreak. Nine local branches of the national railway bureau canceled more than 400 trips on Friday, according to China State Railway. Authorities canceled as many as 2,500 trips across the country on Thursday after a cluster of infection cases appeared on a city bordering Beijing.

As of Saturday, eight high-speed railway workers in Tianjin, and seven of their relatives, were confirmed to be infected with the respiratory illness while at work. Authorities have taken precautious such as requiring employees to wear protective masks and have their temperature taken regularly.

Passenger numbers for other forms of travel were also down during China’s 40-day holiday travel season, which runs from Jan. 10 to Feb. 18 this year, according to the Ministry of Transport. Before the outbreak, the ministry forecast that people would take more than 3 billion trips during the season. As of Friday, it had barely exceeded 1.2 billion.

Decline in transportation could hurt the outlook for China’s economy, which grew 6.1% in 2019. Based on preliminary data, the National Bureau of Statistics estimated that domestic transportation, along with warehousing and postal services, made up 4.3% of China’s GDP last year.