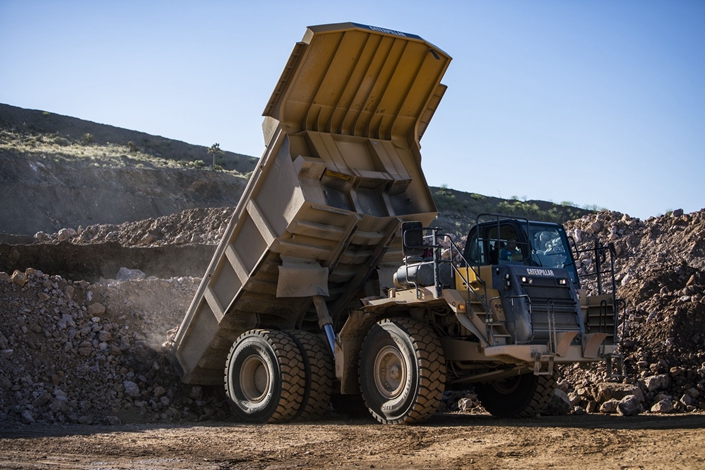 High grade raw ore is gathered for crushing at a mine. Photo: Bloomberg

(Bloomberg) - Chinese commodity prices collapsed on the first day of trading after the Lunar New Year break as investors returned to markets gripped by fear over the impact the coronavirus will have on demand in the world’s biggest consumer of raw materials.

The country’s three major commodity exchanges were hit by an unprecedented bout of selling as they reopened, with Chinese traders getting their first opportunity to catch up with losses inflicted on overseas markets while they had been on holiday.

Metals, energy and agriculture futures were all hammered, with China’s benchmark iron ore contract falling by its daily limit of 8%. Copper, crude and palm oil also sank by the maximum allowed, while shares in commodity producers tumbled as stock markets reopened.

Investors have deserted raw materials markets around the world from copper in London to palm oil in Kuala Lumpur over fears about the economic fallout from the virus. More than a dozen Chinese provinces have announced an extension of the lunar new year holiday by more than a week in a bid to halt the spread of the virus that has killed hundreds of people and sickened thousands.

“Investors are fleeing from commodities and seeking risk-aversion assets,” said Chen Tong, an analyst with Tianjin-based First Futures. “Everything from consumption to logistics (has) stagnated with 30 Chinese provinces and regions announcing the highest level of public health emergency and so the market is basically bearish across the board.”

Iron ore slumped to 606.50 yuan a ton in Dalian, the lowest since early December. Steel reinforcement bar opened at its downside limit to trade at the lowest since December 2018 and domestic oil futures saw the biggest decline since their debut in March 2018.

The sell-off on commodities exchanges was repeated across China’s financial markets, with stocks plummeting by the most since an equity bubble burst in 2015. Bond yields dropped the most since 2014 and the yuan weakened to the cusp of 7 per dollar.

Authorities have pledged to provide abundant liquidity and urged investors to evaluate the impact of the coronavirus objectively. The central bank on Monday reduced rates as it injected cash into the financial system.

Investors are nonetheless spooked about the impact of the virus on growth as swathes of the country are locked down. Bloomberg Economics estimated growth could slump to 4.5%, the lowest in quarterly data going back to 1992.

For raw materials, regions accounting for about 90% of copper smelting, 60% of steel production, 65% of oil refining and 40% of coal output have told firms to delay restarting operations until at least Feb. 10.

Fears over the effect that’s going to have on global demand and supply balances had hammered global prices while Chinese markets were shut. Brent crude has tumbled about 8% since the start of the lunar new year holidays, copper on the London Metal Exchange had its worst month since 2015 while Malaysian palm oil last week fell the most since 2008. Singapore’s iron ore contract has lost 8%.

Traders are looking for any signs of how the virus will impact demand and the flow of commodities in and out of the country. Chinese oil demand has already dropped by about three million barrels a day, or 20% of total consumption, as the coronavirus squeezes the economy, according to people with inside knowledge of the country’s energy industry.

The drop is probably the largest demand shock the oil market has suffered since the global financial crisis of 2008 to 2009, and the most sudden since the Sept. 11 attacks. China is the world’s largest oil importer, after surpassing the U.S. in 2016, so any change in consumption has an outsize impact on the global energy market.

China is also the biggest producer of refined copper and steel, and imports two-thirds of the world’s seaborne iron ore. Its share of global base metals demand exceeded 50% in the first 10 months of last year, from less than 20% during the SARS crisis, Bloomberg Intelligence estimates.

While Chinese metals markets tanked on Monday, some contracts on the London Metal Exchange rebounded, with copper rising for the first time in 14 days.

And losses weren’t universal across China’s commodity markets. Gold added 2.7% in Shanghai as the traditional haven rose in line with gains in overseas precious metals markets. Thermal coal escaped the massive sell-off, advancing as traders weighed extended mine shutdowns due to the virus outbreak.