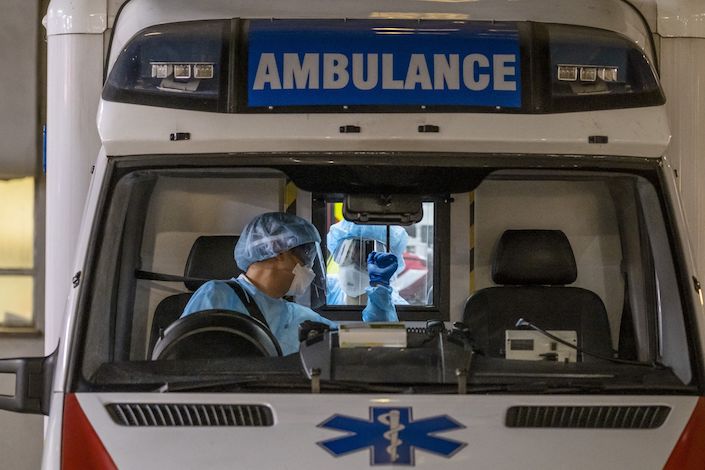 A 39-year-old man who died Tuesday became the first coronavirus-related fatality reported in Hong Kong, raising concerns that the viral disease may be more lethal for young patients than was previously thought.

The patient was hospitalized for days after testing positive for the novel coronavirus. He had visited Wuhan, the epicenter of the outbreak, Jan. 21 and showed symptoms of muscle pains and fever after returning to Hong Kong via high-speed train, according to Lau Ka-hin, the Hong Kong Hospital Authority’s chief manager for quality and standards.

His death is the second attributed to the new virus outside the Chinese mainland, where 425 people have died and more than 20,000 others have been sickened, according to official date. On Sunday, a 44-year-old Chinese man from Wuhan died in the Philippines. As of Tuesday, Hong Kong has confirmed 17 infection cases with two in critical condition.

The course of the Hong Kong patient’s disease ― featuring rapid deterioration after several days of treatment ― may add to evidence linking the disease to damage to multiple organs, especially the heart, some doctors said. Such a development would be different from patterns seen 17 years ago with the similar respiratory coronavirus that caused SARS.

The Hong Kong patient’s condition collapsed Tuesday morning, and he died after experiencing heart failure, Lau said. The final cause of death is still unclear, and the patient had received medication for diabetes, he said.

The man is one of the youngest victims so far recorded in the epidemic as most fatalities have been among elderly people, especially those with underlying health issues, according to information released by the government.

The youngest fatality linked to the virus so far was a man from Wuhan, 36 years old, who died Jan. 24, according to information released by the Hubei health authority. The patient, surnamed Li, had no record of chronic disease.

Details released by the provincial health authority showed that Li was hospitalized after a three-day fever. He had lung infections according to CT scan and was tested with high white blood cell counts. Li’s condition plunged after 14 days in the hospital, with a sudden drop in heart rate and blood pressure. His death within hours was attributed to heart failure.

Another similar case was reported Feb. 3 in Chongqing. A 51-year-old male patient died after a sudden drop in heart rate and oxygen saturation.

It is still unclear how the deadly virus affects different age groups because of limited disclosure of detailed information on individual cases. Hubei, which has accounted for 97% of the deaths in China, stopped releasing details on fatal cases since Jan. 26.

A Beijing physician who is in Wuhan to assist local hospitals said many patients infected by the coronavirus showed only moderate symptoms such as fever and fatigue at the beginning before suddenly deteriorating after a week with respiratory failure.

Patients often suffered damage to multiple organs, especially the heart. Some severe patients’ readings for cardiac troponin, a key indicator of myocardial damage, was 10 times higher than for patients who suffer heart attacks, according to the Beijing physician.

Such developments were not seen among patients infected by the SARS virus in 2003, according to his observation, the physician said. SARS, formally known as Severe Acute Respiratory Syndrome, is also a member of the coronavirus family. The outbreak 17 years ago claimed nearly 800 lives.

The actual cause of organ damage to patients infected by the new coronavirus is unclear, said a cardiologist in Beijing, but the damage causes dramatic difficulties for treatment.

Zhao Zuoyan contributed to this story.