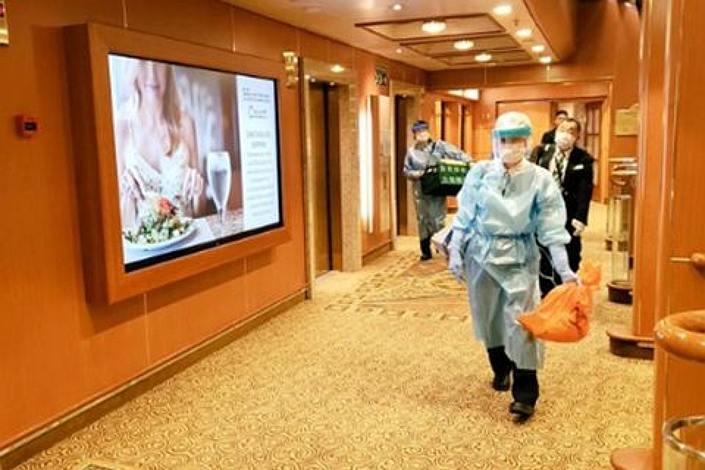 Ongoing testing for the novel coronavirus among cruise passengers quarantined off the coasts of Japan and Hong Kong has revealed large clusters of infections, with Japan’s total number of confirmed cases nearly doubling on Thursday as a result.

Japan’s health ministry has confirmed that 20 of the 102 people screened so far aboard the Diamond Princess cruise ship have tested positive for the nCoV-2019 coronavirus. The ship, which carries 1,045 crew members and 2,666 passengers, concluded a 16-day multistop voyage in Asia on Monday, and has since been quarantined off the coast of Yokohama, a port city south of Tokyo.

Combined with Japan’s other confirmed infections, those on the ship bring the country’s total to 45, highest tally by far of any country besides China.

Those on the ship who have tested positive will be transported to local medical institutions, the ministry said. U.S.-based Princess Cruises Inc., the operator of the Diamond Princess, had previously announced that individuals from Australia, Japan, the U.S., the Philippines and Hong Kong were among the first aboard to test positive for the virus.

Meanwhile, Hong Kong’s department of health confirmed that, as of Wednesday, eight travelers from the Chinese mainland had tested positive for nCoV-2019 after taking a Jan. 19 to Jan. 24 cruise aboard another ship, the World Dream. Both Hong Kong and Guangdong provincial authorities were seeking to contact the 4,482 passengers on that voyage.

The World Dream, which now carries the same 1,800-member crew with a new set of more than 1,800 passengers, has also been quarantined. As of Wednesday night, health officials have ruled out nCoV-2019 infections among 32 of 33 crew members tested after reporting symptoms akin to upper respiratory tract infections. Nevertheless, three crew members have developed fevers and have been sent to a hospital.

“All passengers and crew members are required to stay on board prior to completion of the health inspection and permission by the (department of health),” the Hong Kong government said in a statement.

News of the cruise ship outbreaks comes amid public pressure on Hong Kong’s Chief Executive Carrie Lam to close the special administrative region’s borders with the mainland to curb the spread of the virus. On Tuesday, a day after Lam announced a mandatory two-week quarantine for all visitors from the mainland, the former British colony reported its first death related to the virus.

As of Thursday, more than 28,000 infection cases have been reported worldwide, and nearly 600 deaths.