Reporter’s Notebook: Coronavirus Sequel Has Drama, But Thankfully Lacks Mystery of the Original 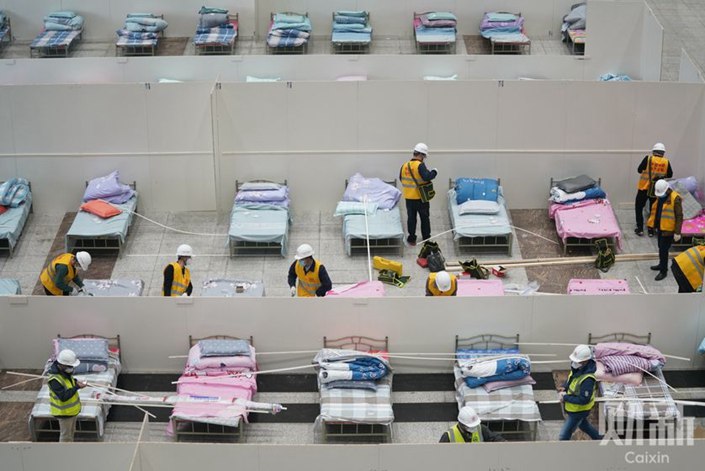 Without a doubt, the biggest change since SARS is the relative speed it took the government to acknowledge the outbreak this time. Photo: Ding Gang/Caixin

What a difference 17 years makes. That’s the number of years that have passed since the SARS coronavirus emerged in China and went on to create a world health crisis like the one we’re seeing today centered in Wuhan.

I was a reporter working for the Reuters news agency in Hong Kong when the original SARS crisis of 2002-2003 erupted in South China’s Guangdong province, and spread from there to the rest of the world. People who remember that time may recall the disease actually first appeared in November 2002, but wasn’t properly acknowledged on the Chinese mainland until around five months later, in the following April.

So what’s changed in those 17 years?

Plenty, it seems to me, as someone who covered the original outbreak and is now on top of the latest one that looks on track to infect far more people but with a far lower mortality than the original. Without a doubt, the biggest change is the relative speed it took the government to acknowledge the outbreak this time.

Similarly, its decisive — and quite extreme, in my view — response this time contrasts with the original, when the government’s wavering actions probably owed at least partly to political circumstances at the time. I won’t go into those circumstances here, but anyone who wants to delve more deeply into that part of the story should check out the detailed chapter on SARS in my book “The Party Line.”

With that little bit of self-promotion out of the way, let’s take a quick stroll down memory lane to look at the original SARS and how it evolved, including my own experience. I should start by saying the disease ultimately killed more than 600 people, and had a mortality rate of about 10%. By comparison, the latest coronavirus has killed almost that many people already – 564 at the latest count – but appears to have a far lower mortality rate of about 2% or less.

Authorities in Guangdong first became aware that something was amiss back in November 2002, but kept things to themselves in terms of public announcements. They may have even kept central leaders in Beijing in the dark as late as February 2003, which is when the first internal document on the disease was filed to Beijing by the official Xinhua news agency. China informed the World Health Organization about the outbreak days later, but continued to largely keep a lid on the situation at home.

The outbreak did make it into China’s public realm in dribs and drabs through the end of March, mostly in short official news reports without context, mostly designed to play down fears and show the disease was under control. In the meantime, the disease had spread to the far more open Hong Kong and was raging there for several months. I have vivid memories of the state of panic in Hong Kong at that time, which peaked with a mass of infections at a community called Amoy Gardens.

My other major memory from that period is the hastily organized press conference I attended in Guangzhou in early April, which was the first such public event in South China at the time. That event was just as memorable for its cloak-and-dagger qualities as anything else, reflecting the secrecy approach the government was taking at that time.

We didn’t even learn about the event until the day before, around 3 p.m. to be exact, and I had to get my visa and get to Guangzhou that evening because the press conference was first thing the next morning. Needless to say, I got my visa in record time, about five minutes, and made it to an event featuring celebrated epidemiologist Zhong Nanshan as guest of honor. Each attendee also got a souvenir book full of ghastly SARS images that I have to this day.

Fast forward to 2020, when most of us heard about the cluster of cases involving a suspected new coronavirus in Wuhan in mid-January, or just a few weeks after local doctors first became suspicious that something was amiss. From there, things rapidly snowballed to the current state, where the city of Wuhan has been quarantined and people throughout China are largely afraid to leave their homes for fear of getting the disease.

In this environment we foreigners are perceived somewhat as oddballs, since most of us don’t seem quite as susceptible to the fear sweeping the country, or at least not to the same degree as average Chinese. But here I have to commend the government on mounting a campaign that strikes that kind of fear into people’s hearts and minds, as it is drastically cutting down on the amount of human interaction and thus chances for the virus’ transmission.

My mind is also quite boggled by the way China has been able to quarantine an entire mega-city like Wuhan, which has more than 10 million people. Something of that magnitude sounds like a plot from a science fiction novel, and could only happen in a centrally controlled country like China.

In writing my book nearly a decade ago, I talked with a number of reporters working for Chinese media at that time about the situation back then. Some who knew how bad things were said they weren’t allowed to report on it until April, even though a few tried. Others said they were oblivious, showing just how effective the government was at keeping people in the dark. To date, Chinese media have been relatively free to report on the latest coronavirus, and hopefully that won’t change.

From my own perspective, the media itself has also really evolved over this period in a generally positive way. Journalists in institutional media are more professional, allowing for the development of more quality content. Certainly there are still many challenges, but the professionalism and pursuit of real stories at some major outlets testify to a growing level of sophistication in China’s media.