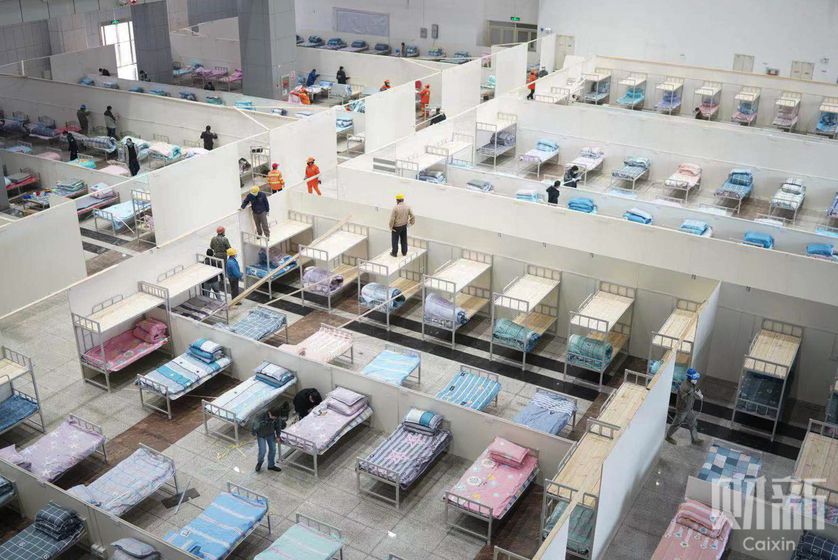 The Wuhan International Conference and Exhibition Center has been converted into a makeshift hospital. Photo: Caixin

There aren’t enough beds in designated hospitals for many confirmed or suspected coronavirus patients, a top official from the city at the epicenter of the outbreak said Wednesday at a press conference on the epidemic.

The 28 hospitals in Wuhan designated to accept coronavirus patients have a total of 8,254 beds, of which 8,182 were occupied as of Tuesday, data from the Wuhan Health Commission showed.

On Tuesday alone in hardest-hit Wuhan, in Central China’s Hubei province, nearly 2,000 new patients were confirmed, and the number of suspected cases increased by 780. Just 116 patients were released from hospitals Tuesday, Hu said.

Meanwhile, testing to confirm coronavirus infection is speeding up, leading to a drop in the number of suspected cases in recent days but a marked increase in the number of confirmed patients with severe conditions, said Li Xingwang, an infectious disease expert with Beijing Ditan Hospital at a press briefing Wednesday.

The number of patients with severe conditions increased by more than 400 each day for the past two days, most of them in Hubei, data from the National Health Commission showed.

Meanwhile, the Wuhan government has been given an order to hospitalize all confirmed infected patients by midnight Wednesday and test every suspected case of the virus by the end of Friday, the business news magazine Caijing reported.

Building makeshift hospitals has been one solution to bridging the gap between supply and demand for beds. After converting three public venues on Monday into medical facilities — containing a total of about 3,400 beds — Wuhan authorities planned to convert eight more venues, including gymnasiums, exhibition centers and sports centers, the official Xinhua News Agency reported. The 11 temporary facilities were said to be completed by Wednesday. All together, they contain more than 10,000 beds.

These hospitals will be mostly used to treat coronavirus patients suffering from mild symptoms. It is part of a strategy announced on Sunday to contain the epidemic.

Under the strategy, authorities first seek to classify patients in one of four ways: confirmed patients, suspected patients, those suffering fevers and those who had intimate contact with an infected person. Once this is done, each category of person will be placed in a different location for concentrated treatment or quarantine. The goal is to prevent cross-infections between different groups, Hu said.

Patients in critical medical condition will be treated in designated hospitals, according to Hu.