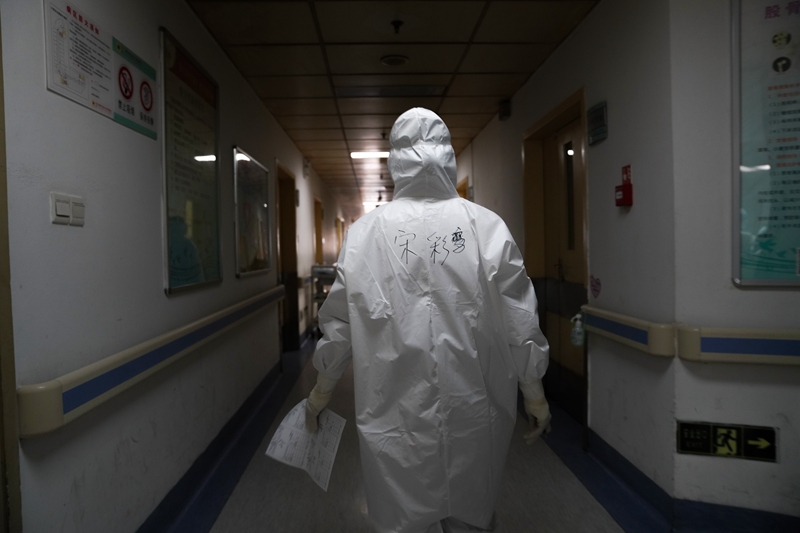 The death of Li Wenliang, the 34-year-old doctor who helped blow the whistle on China’s earliest coronavirus cases, is exceptionally saddening.

As early as Jan. 20, Zhong Nanshan, the leading Chinese epidemiologist fighting the virus, revealed that 14 medical workers had been infected with the previously unknown pneumonia-causing pathogen, proving that the situation had already become extremely serious. During the SARS outbreak 17 years ago, large numbers of medical staff were among the thousands infected in China. Many of them died from the very disease they were working so hard to treat. It was one of the most tragic chapters in China’s medical history.

Now that China is ablaze with a new epidemic, the government must not make the same mistakes. Protecting the country’s brave medical workers must be treated as a matter of critical concern.

The doctors, nurses and other personnel who fight on the front lines of the epidemic are not only their patients’ saviors but also the most vulnerable group to infection. The new coronavirus can exploit the smallest gap in the chain of protection, be that a failure to guarantee basic medical supplies like protective suits and face masks, or lapses in established medical treatment protocols.

We still don’t know the true number of medical personnel who have been infected or even died in the line of duty during this outbreak. But we can be sure that no small number of them have been laid low by the virus, perhaps promising, like Li, to recover quickly, return to frontline work and contain the spread of the disease.

Right now, what medical staff need most isn’t public eulogies about “angels in white coats,” but strong protection, thoughtful care and sincere understanding. That protection must extend beyond their physical and mental health to include their professional development as specialists and their rights and dignity as citizens.

But what exactly constitutes true protection for our medical workers? For this, we need to design short-, mid- and long-term plans for dealing with situations of varying severity.

One thing that should be accomplished immediately is the establishment of a daily reporting system for medical staff nationwide who have been infected with the coronavirus, akin to the mechanism put in place during the SARS epidemic. Such a system could include confirmed diagnoses, suspected cases and recorded deaths, thereby becoming an important information disclosure platform.

Certainly the 18 million-strong Wuhan area at the center of the outbreak and the surrounding central Chinese province of Hubei are in dire need of a daily reporting system. Caixin journalists understand that at least 40 medical workers at one overwhelmed facility, Zhongnan Hospital of Wuhan University, had developed coronavirus infections as of Jan. 28, a figure that reveals much about the likely situation at other hospitals.

Daily reporting mechanisms not only strengthen oversight of the problem by the government and health department but also raise awareness among doctors and nursing staff themselves, furthering understanding between patients, family members and medical staff.

Protection demands the right kind of attitude, but it also requires material commitments. The failure to build up reserves during normal times meant that when the epidemic suddenly struck — and around the Lunar New Year holiday to boot — spiraling numbers of confirmed cases went hand in hand with serious shortages of basic containment supplies, particularly face masks and protective suits.

Many hospitals have been forced to work with what they have; some have begged for donations online. To use fewer decontamination suits, many doctors have gone without drinking water or toilet breaks for hours on end. Government agencies at all levels, as well as many social actors and businesses, have desperately scrambled to mobilize resources, but severe shortages in some areas will persist for a while longer.

Those resources currently available must go toward helping frontline medical staff instead of being picked off by those in less need. The case of the Wuhan Red Cross Society, which landed itself in hot water for failing to distribute critical donations of medical supplies among frontline hospitals, shows how those in leadership positions in China often get first pick when it comes to divvying up resources.

Some localities have already stipulated that public servants not working on the front lines of the epidemic may not use N95 surgical masks, so called because they prevent 95% of small airborne particles from entering the nose and mouth area. Such rules are worth emulating elsewhere. Prioritizing the needs of medical personnel is essential for containing the epidemic; we mustn’t make the vanguard of the resistance lose their health as well as their morale.

At the same time, we must systematically analyze infected medical workers on a national level, identifying where problems occur and finding targeted solutions. In particular, we must solicit feedback from frontline doctors. China’s National Health Commission has already released technical guidelines for the prevention and control of coronavirus infection within medical institutions, including passages on the protection of medical workers. But it’s clear that the guidelines have not worked as well as intended. The doctors infected so far aren’t restricted to their hospitals’ fever or pneumonia units but also include staff on other wards. We need to find out why.

In the medium term, the level of protection accorded to medical personnel hinges to a large extent on the improvement of public sanitation systems. Local governments and health departments have taken a lot of flak for their handling of the current epidemic, with several high-level provincial and municipal officials making histrionic public displays of contrition. But the fact their mistakes happened in the first place is enough to breed public resentment.

In a bid to avoid a repeat of the creaking capacity issues and information cover-ups that blighted the initial stages of the SARS epidemic, China’s government in recent years has invested huge sums of money, notably upgrading relevant hardware systems, and continuously raised its level of scientific research. Public sanitation and prevention frameworks were supposed to be more robust than ever. But they have collapsed under the first major test since SARS.

What problems have emerged with regard to the spread of information, policy effectiveness and the implementation and incentive mechanisms at the heart of the system? Once the worst of this epidemic is behind us, we suggest that government establish a high-level investigative commission to write a full, systematic, exhaustive report on these issues, which should be released to the public.

Looking toward the long term, we must be resolute in urging the reform of China’s medical system. Throughout this process, we must strongly emphasize the protection of medical workers’ rights and privileges. It is sickening to hear so soon after the public outcry against a string of violent incidents against doctors — including the brutal December slaying of the Beijing-based Yang Wen by the relative of a former patient — that some of the doctors risking their lives at the forefront of the epidemic have also been threatened or physically attacked. If medical reformers learn anything from this, it is that we must stop pushing frontline doctors into situations where such altercations can occur. The problem will not go away on its own.

Protecting our medical workers also requires us to raise transparency and tolerance across all of society. When Li tried to raise the alarm over the coronavirus outbreak, police called him in for a middle-of-the-night reprimand and had him sign a document branding himself a “rumormonger.” Now that he has been struck down in his prime, those actions smell even more strongly of official abuse of power.

We advocate complete transparency in the prevention and control of epidemics, for respect of the public’s right to know and for specialists to be granted freedom of discussion. But all of that is dependent on the rapid modernization of the government’s administrative systems and capacities.

Seventeen years ago, Liang Shikui, a doctor in the emergency unit of the Shanxi Provincial People’s Hospital, became one of more than a dozen medical professionals to die while fighting the SARS epidemic. At the time, China’s then-Premier Wen Jiabao expressed “deep sadness” and sent his sincere condolences to Liang’s family. In the aftermath of Liang’s death Friday, the World Health Organization and innumerable people both in China and abroad sent messages of mourning and respect.

Throughout the epidemic, the deeds of China’s frontline medical workers have moved the country. But more importantly, they have informed the country and enlightened it. Policymakers have described this epidemic as “a great test of China’s governmental system.” Now we know that test contains a question the state must answer: Can you protect your medical workers?