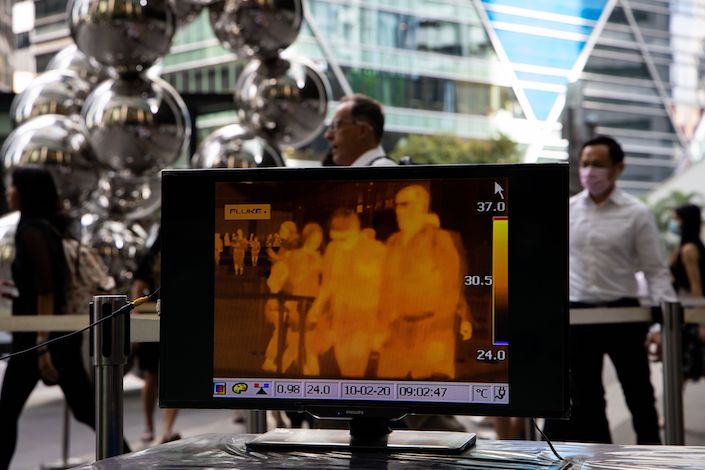 A monitor displays a thermographic image of office workers passing through a gate outside an office building in the central business district of Singapore. Photo: Bloomberg

(Bloomberg) --Singapore’s coronavirus outbreak has spread to its financial center, with some staff at major companies being told to work from home for at least the next few days and temperature screening checkpoints set up at the front doors of several towers.

A worker at an unnamed company in Marina Bay Financial Centre Tower 1 was confirmed as being infected with the virus over the weekend, according to a circular to tenants from the building’s manager Raffles Quay Asset Management Pte. Another case at nearby Clifford Centre, in the heart of the central business district, is an employee of United Industrial Corp., according to an advisory to tenants in the building where UIC is located.

The affected premises in both buildings have been disinfected and all tenants informed, the property managers said in the notices dated Feb. 9.

Singapore last week raised its disease response level to the same grade used during the SARS epidemic as it braced for what Prime Minister Lee Hsien Loong said was a “major test for our nation.”

There are 45 confirmed cases of coronavirus in Singapore ― the largest number of infections outside China, excluding a quarantined cruise ship in Japan. Of the total, 23 cases are locally transmitted infections, according to the city-state’s health ministry. Seven people have fully recovered from the infection and been discharged from hospitals, while seven are in critical condition.

The city-state has cautioned residents to avoid shaking hands to contain the spread of the virus. Panic buying had sparked a run on toilet paper, rice and instant noodles in stores, mirroring scenes of long lines and bare shelves last week in Hong Kong and mainland China. Government officials warned against hoarding supplies, while the Monetary Authority of Singapore told banks to be prepared for increased demand for cash withdrawals.

Standard Chartered PLC is the anchor tenant at Tower 1, leasing much of the 33-story building with 620,000 square feet. The U.K. bank declined to comment whether the virus case is among its employees.

“We have a well-established business continuity plan and implemented a comprehensive set of precautionary measures such as temperature screening, mandatory employee and visitor declarations, and increased the frequency of sanitization at our branches and office premises,” the bank said in an emailed reply to queries from Bloomberg.

DBS Group Holdings Ltd., Southeast Asia’s largest bank with headquarters in the nearby MBFC Tower 3, activated business continuity plans with employees working from home and from other locations in addition other measures that include temperature screening at all its office buildings, the bank said in an emailed reply to questions from Bloomberg.

Rio Tinto Group, Australia’s top iron-ore miner that’s also located in Tower 3, said it has instructed employees to work from home Monday through to Wednesday “as a precaution.” Its Singapore office is a key hub outside Australia.

A spokesperson for Raffles Quay Asset Management said the building manager stepped up precautionary measures at its buildings including temperature screening, more frequent cleaning in common areas and toilets, and deployment of hand sanitizers.