11 Million Chinese Live Outside China. Many Are Now Stuck Inside 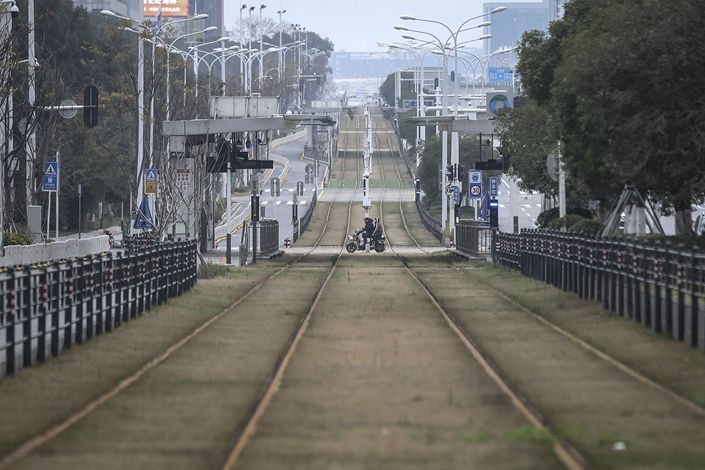 A resident rides a motorbike across an empty track on Feb. 7 in Wuhan, Hubei province. Photo: Bloomberg

(Bloomberg) — A student who might not get back to Sydney in time to graduate. A Silicon Valley executive left out of meetings.

Hundreds of thousands of Chinese citizens who live overseas but returned home for the Lunar New Year holidays are now stuck in the country as a growing list of nations bar those who have been in China from entering to curb the spread of the deadly new coronavirus. Among the nearly 11 million Chinese migrants around the world, they’re trying to find ways get back to their jobs and schools, and going to extreme measures to keep up with work and study.

I’m working like a slave right now and haven’t slept in 24 hours” said Louis Yang, a New York-based trader at a U.S. fund, who’s currently stranded in the eastern province of Zhejiang after the U.S. said on Jan. 31 that it would bar travelers from China.

Basically I’m working both the China and U.S. time zones, so I start working at noon in China till 1 a.m. or 2 a.m., and sometimes until the early morning.”

The travel bans — put in place with little warning by nations from New Zealand to Italy — have caused confusion and disruption for many Chinese expats who returned for the annual holiday to see family. Return flights were canceled as airlines slashed services to and from China, visa applications went into limbo and many who’ve built lives in other countries found themselves separated from their loves ones and homes indefinitely.

The virus, which has killed more than 1,100 people in China, has prompted extreme measures within the country as well, with more than 50 million people quarantined in Hubei, the central Chinese province where the pathogen originated. Several other cities and regions have started to restrict movements too. The Chinese government has pushed back at countries that have enacted travel bans, accusing them of “spreading panic” as the nation struggles to control the outbreak that has spread to more than 20 nations.

One senior Silicon Valley-based tech executive surnamed Wu said he’s considering flying to a third country to circumvent the ruling that foreign nationals who have been in China for the last 14 days aren’t allowed into the U.S.

This idea is gaining popularity in chat groups on Chinese social media platforms where those stranded are gathering to swap stories and tips. Popular third-country destinations include Thailand and Dubai, according to conversations seen by Bloomberg News.

The loss of Chinese workers and students is causing disruption from banks on Wall Street to construction sites in Singapore. About 30,000 foreign workers from China left Singapore over the New Year break and have not returned. As China’s importance on the world stage has grown, so has the spread of its diaspora, particularly in industries like science and education.

“The virus is a body blow to the Chinese economy, and the ill effects are reverberating across the globe,” said Mark Zandi, chief economist at Moody’s Analytics. “If Chinese workers and students aren’t able to travel to their jobs and universities for over two months, this will cause significant adjustments and economic costs.”

Wendy Wu, a Ph.D. candidate at Yale University, is currently waiting out her two weeks in Bangkok before trying to return to the U.S. “I’m just hoping I can get back by the end of the month, or I’m not sure if I can still graduate on time.”

Wu is one of the 1.53 million Chinese students studying or conducting research abroad, according to 2018 data from the education ministry. Students like her are a crucial source of revenue for universities in the U.S., U.K. and Australia, one that could be threatened as the virus outbreak forces the cancellation of exams they need take in order to apply for admission.

Chinese students in the U.S. had a $22 billion impact on the economy last year, according to Rahul Choudaha, executive vice president of global engagement and research at Studyportals. China is still the largest source of international students for the U.S., despite the two-year trade war, and applications to the U.K. have also risen.

Last week, Australia’s Treasurer Josh Frydenberg warned that the virus will have a “significant” impact on the country’s economy in part because the number of Chinese students there has doubled since the SARS epidemic 17 years ago.

For those already enrolled in school overseas, the situation threatens to jeopardize their studies.

“My research work requires hands-on experiments, so it’s basically stagnant right now,” said Tom Liu, a 27-year-old Ph.D. student at Stanford University, who’s now stuck in his hometown in Hubei province. “It makes sense to me that a small country restricts travel to protect its people, but for such a powerful nation like the U.S., I don’t really understand why they are in such a rush to restrict travel.”

The U.S. said Saturday it will temporarily suspend regular visa services in mainland China from Monday as the outbreak leaves it with “limited staffing.” Though it may provide some emergency appointments.

Like others stuck at home, Liu has been working remotely from China. Aside from the time difference and limitations of working on a laptop, China’s internet restrictions also make that task more challenging.

Common websites including Google and a raft of foreign news providers are not accessible in China except through virtual private networks (VPNs), which help users circumvent internet controls. These can be unreliable and occasionally blocked by the authorities.

Simon Wang, a 30-year-old senior financial analyst at a bank in San Francisco now stuck in China, said he wakes up at four or five in the morning to catch up with his colleagues in California and take advantage of the better VPN connection when fewer people are online.

“The situation could deteriorate as companies face increasing difficulties in delivering output in the mid- to long-term due to a shortage of Chinese workers,” said Tommy Xie, an economist at Oversea-Chinese Banking Corp. in Singapore. “If key personnel can’t return quickly, the economic impact to those companies and countries could last longer and be deeper.”

More travel bans could be put in place, worsening the situation for Chinese nationals and travelers to the country. India, which has confirmed only three cases of the virus, said existing visas are no longer valid for any foreign national traveling from China. Saudi Arabia, where there are no infections yet, has barred non-citizen residents who travel to China from returning to the country.

For Rachel Lu, a 22-year-old Beijing native who had planned to return to Australia this week for her final semester at the University of Sydney, life remains on hold.

“I’ve lived in Sydney for six years and now I can’t go back,” said Lu. “My fiance, dog and cat are still there. This has ruined all my future plans.”