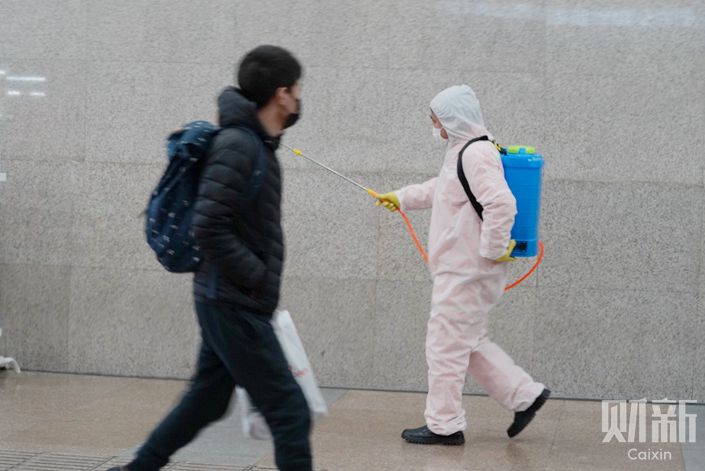 Since Monday, multiple Hangzhou renters have told Caixin that they are still barred from their apartment buildings. Photo: Cai Yingli/Caixin

As work resumed across China this week after an extended Lunar New Year holiday due to the coronavirus outbreak, many people arriving back to their rented apartments in Zhejiang province tech hub Hangzhou found they were barred from entering their communities.

The government of the eastern city, which is home to many major internet firms including e-commerce giant Alibaba Group Holding Ltd., on Feb. 4 ordered (link in Chinese) neighborhood committees to strictly manage outsiders, vehicles and renters. Many neighborhoods then simply decided to ban people from returning to their rented houses after the holiday, when many people to travel back to their hometowns.

In response to a backlash from these temporarily homeless people, the city government on Monday said (link in Chinese) neighborhoods should not restrict tenants from entering their communities.

However, it appears that the latest instruction hasn’t had the impact of the first. Since Monday, multiple Hangzhou renters have told Caixin that they are still barred from their apartment buildings. One unmarried couple said that they returned to their community together, only to find that one of them — who owns the apartment they share — was allowed to enter while the other was rejected and had to stay at a hotel.

“The Hangzhou government has ordered that neighborhoods should not freely ban residents and tenants from entering, but because it’s now a period of high incidence of the epidemic, each community has its own management measures and tenants have to cooperate accordingly,” an operator of the city’s administrative hotline told Caixin.

Chen Yang (pseudonym), who has worked in Hangzhou for three years, said that he flew back to Hangzhou from Northeast China’s Heilongjiang province on Feb. 9 after his landlord said the residential community had asked renters not to return before Feb. 8.

However, after Chen arrived, he was told that only homeowners were allowed to enter. After several rounds of negotiations and failing to find a hotel nearby, Chen had to spend the night with a security guard who offered a space in his booth for Chen to rest. “I just sat there for the entire night,” he said, adding that he saw many people like him, dragging their luggage and looking for a hotel.

As of Tuesday, many people working at subdistrict-level government offices in Hangzhou said they had not heard of the city’s Monday order and were still implementing the strict Feb. 4 policy.

An officer at a local disease prevention and control unit said in a phone call that many out-of-town tenants were not factually reporting where they had been over the Lunar New Year holiday. “Many residents we’re isolating here (at the unit) were like that. Some even covered up their whereabouts when their landlords asked them,” she said.