By Rei Kurohi and Hariz Baharudin 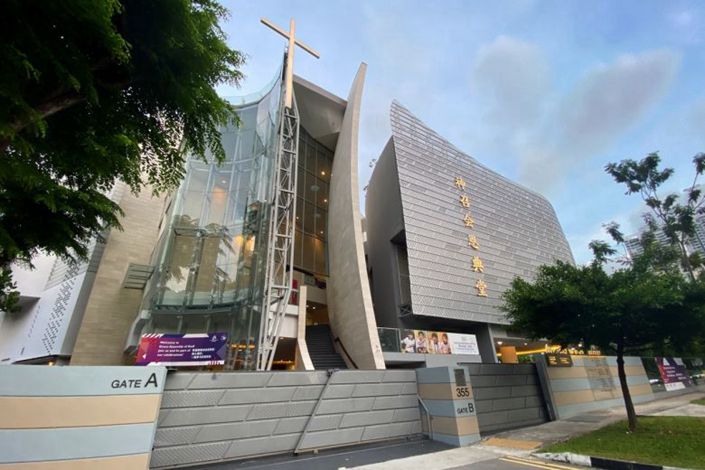 The Grace Assembly of God church's premises in Tanglin. Five of the eight new coronavirus cases in Singapore are linked to the church.ST. Photo: GAVIN FOO/The Straits Times

(The Straits Times) - Eight more cases of the coronavirus with links to previous ones have been confirmed in Singapore, bringing the total number of infected people to 58.

Five of the new cases are linked to the Grace Assembly of God church, including a 54-year-old man who works at the National University of Singapore (NUS), the Ministry of Health said on Thursday.

The Straits Times understands he is a professor. He did not interact with colleagues and students after he fell ill.

The cluster is now linked to seven confirmed cases, including two announced on Wednesday.

Another two new cases are Bangladeshi work pass holders, aged 30 and 37, who are linked to a worksite in Seletar Aerospace Heights. They are cases 52 and 56.

The worksite is now linked to a cluster of four cases, all of whom are Bangladeshi nationals.

The last new case is a 30-year-old Singaporean man who is a family member of case 50, the 62-year-old male DBS Bank employee who was confirmed to have the virus on Wednesday. He is case 55.

None of the new cases has recent travel history to China, where the virus originated in Wuhan. They are all currently warded in isolation rooms at the National Centre for Infectious Diseases.

Of the five linked to the Grace Assembly of God church, two were confirmed to have the virus on Wednesday afternoon, and the other three tested positive on Thursday morning. All five are Singaporeans.

Before being hospitalised, he went to work at both of the church's locations, in Tanglin Road and Bukit Batok West.

It is unclear if the other three cases linked to the church - cases 54, 57 and 58 - are congregants or workers. Two previous cases in the cluster, cases 48 and 49, were both church workers who visited both locations.

One of the Bangladeshis confirmed to be infected on Thursday, case 52, fell ill on Feb 7.

He reported that he had mostly stayed in his rental apartment in Campbell Lane since he fell sick.

The 37-year-old was identified as a close contact of the two previously identified Bangladeshi work pass holders, who both worked at the Seletar Aerospaces Heights worksite.

The MOH also said on Thursday that Singapore will continue to rely on laboratory tests to confirm cases of infection.

It added that it would not change its approach to confirming cases of the virus despite the Chinese authorities adopting new broader guidelines, including the use of CT scans and clinical diagnosis of symptoms.