Buy a House Online During the Epidemic? So Far, No Takers 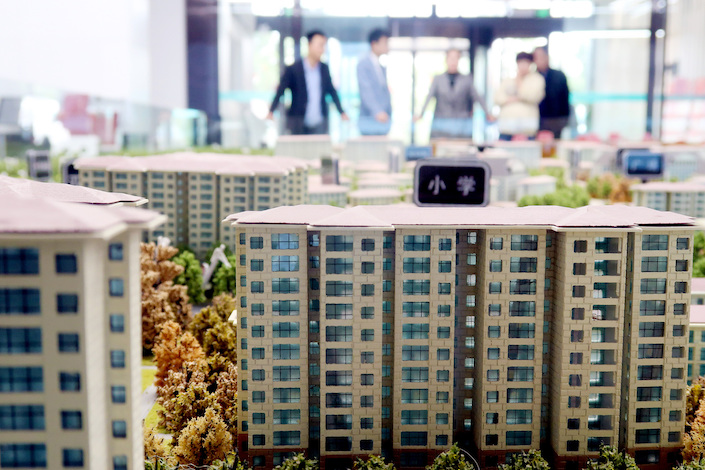 A sales office at a Zhengzhou developer before the coronavirus epidemic outbreak. Photo: VCG
As the Covid-19 epidemic shows no signs of ending soon, hard-pressed Chinese property developers are trying to sell houses online, but with little success. Sales have almost completely dried up, industry data show.

The China Real Estate Association asked members Jan. 26 to suspend business at their sales offices nationwide to prevent human-to-human transmission of the virus. As of Thursday, the disease sickened nearly 60,000 people and killed more than 1,300 in China.

Potential buyers can take virtual tours of housing, talk with sales staff, book on-site viewings and even sign purchase agreements and pay deposits online. But none of this has led to any actual sales, according to sales staff from several developers. The only deal reached since the closure of sales offices involved an existing client, and no deals were reached online, a developer at Zhengzhou told Caixin.

Real estate transactions still rely on on-site viewings, and online showings can play only a limited role in attracting potential buyers for the future, a leading developer said. Online showings may help buyers who shop condos for investment purposes, but those who seek housing for personal use would still prefer on-site viewings, the developer said.

To encourage purchases, some developers offer cancellations without cause. Sunac recently said buyers in certain projects can cancel transactions made from Feb. 9 to March 31 for no reason within 30 days after purchase. Other developers including Sinic Holdings, Country Garden and Sunshine City Group Co. followed suit.

If the epidemic is contained by the end of this month, the impact on the real estate industry will be limited as the virus outbreak has delayed market demand rather than eliminated it, GF Securities said in a report released Feb. 9.

But for developers, cash-flow problems are becoming more troublesome. Most of them already faced liquidity pressures after regulators tightened the financing environment in the past few years. Deposits and mortgage loans account for about half of developers’ funds. Now, as regulators slow the financing approval process, the debt issuance of developers has also significantly contracted.

Meanwhile, many developers will face a peak of debt maturity in the second half of this year with a total of 120 billion yuan ($17.2 billion) of debt due, CRIC data shows. Assuming a 50% decline in operating cash flow, most developers’ current cash can last only about three months, Ping An Securities estimated.

In response to the central government’s call to maintain economic stability, many local governments have introduced measures to help property companies. The Guangdong and Chengdu governments Wednesday allowed developers to reopen sales offices with conditions, including limiting the number of visitors.

Wang Jing and Zhao Tiantian contributed to this report.