China’s Roads to Be Toll-Free Until Epidemic Ends

By Yuan Ruiyang and Lu Yutong 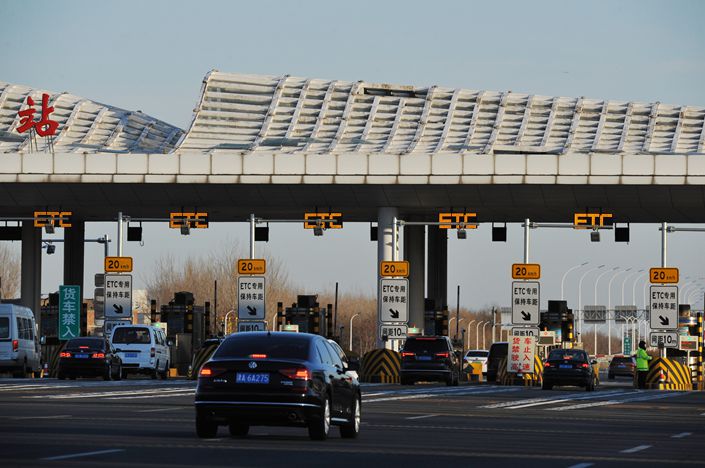 Toll booths on a highway in the nothern city of Tianjin on Dec. 16. Photo: IC Photo

China’s roads will be toll-free from Monday onward to encourage companies to resume work amid the coronavirus outbreak, the Ministry of Transport announced Saturday.

The policy will be in force until the epidemic is deemed to be over, the announcement said.

While all segments of China’ s economy have seen disruption due to the outbreak, which has infected tens of thousands of people and killed nearly 1,800 since December, the logistics industry has been particularly hard hit. Orders have plummeted, and transport restrictions enforced by many regions have prevented deliveries between regions and cities.

“Our businesses has dropped by 93% during the coronavirus outbreak, as transportation is restricted and companies are closed,” said Shing Chow, CEO of Lalamove, which offers delivery services to 4.8 million monthly users in 266 Chinese cities.

Several logistics firms told Caixin that many cities set their own criteria for which vehicles can enter, including the driver’s place of birth, where their driver’s license was issued and the kind of goods being delivered. There have also been cases in which drivers were prevented from entering entire provinces, including Shandong, Anhui, Henan and Jiangxi, the companies said.

Large and midsize logistics firms have seen their business decline by 77% year-on-year as of Monday, according to industry data platform G7 Networks.

“For Chinese toll road operators, this is clearly credit negative because their operating cash flow will come under pressure from the new toll-free policy, which is part of the government’s relief measures in response to the coronavirus outbreak,” said Moody’s analyst Ivy Poon.

“We expect the government to introduce measures to compensate the toll road operators for the lost revenue, but the magnitude, timing and duration of such measures is not certain at this point.”

Of the 4.84 million kilometers of highway China had in 2018, just 3.5% were toll roads, according to state-run media outlet Economic Daily. Toll fees that year reached 555.24 billion yuan ($79 billion).