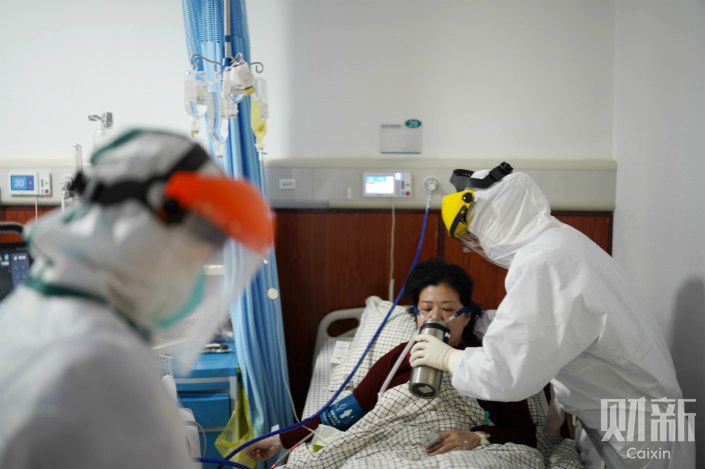 A medical worker cares for a coronavirus patient in Wuhan, Hubei province. Photo: Ding Gang/Caixin
The biggest study yet of the Covid-19 epidemic found that almost twice as many Chinese medical workers have been infected as officially reported by the government, though the research didn’t turn up the source of the novel coronavirus.

A team at the Chinese Center for Disease Control and Prevention (CDC) studied 72,314 cases as of Feb. 11, among which 44,672 were confirmed cases of coronavirus. The sweeping study was published Monday by the Chinese Journal of Epidemiology.

The researchers found that 3,019 medical workers had been infected, among whom 1,688 patients were in severe or critical condition. As of Feb. 11, the government acknowledged more than 1,700 medical workers nationwide as confirmed with the disease, almost 90% of them in Hubei, according to Chinese National Health Commission deputy chief Zeng Yixin at a press conference Friday.

The overall death rate among confirmed cases was 2.3%, the CDC researchers found. In Hubei province, the epicenter of epidemic, the pace of fatalities was 2.9%, compared with 0.4% in the rest of the country, according to the paper. For patients more than 80 years old, the fatality rate can be as high as 14.8%, the study found.

Doctors and nurses in Wuhan have faced the highest risk of infection, especially in early January, the study found. In the first 10 days of January, nearly 40% of infected medical workers progressed to severe condition before the rate declined in February. Among the 1,688 severely ill medical workers, 64% were in Wuhan and 23.3% in other areas in Hubei, according to the paper.

The study reported that an additional 13.8% of patients were in severe condition, meaning difficulty breathing, low oxygen uptake, multiple lung lesions or other clinical circumstances requiring hospitalization, according to the NHC guidelines.

The study didn’t provide details on how medical workers were infected or why protective measures failed. Caixin’s in-depth reports showed that in the early stage of the epidemic, uninformed doctors had close contact with infected patients without enough protection and that shortages of protective supplies and substandard gear also left workers exposed to infection.

The paper provided different findings from another paper published a week earlier. The new study said there is no evidence of “super-spreader” incidents at any hospitals. The earlier paper, produced by a team led by Zhong Nanshan, a Chinese epidemiologist who discovered the SARS coronavirus in 2003, said it could not preclude the presence of “super-spreaders,” defined as one person who transmits infection to more than 10 others. The earlier study covered about 1,000 cases from Jan. 1-29.

Early cases suggest that the Covid-19 virus may be less damaging than the SARS and MERS coronaviruses, but as the number of cases increased rapidly, the new virus appears to be more contagious than the two others, the researchers said.

Before Dec. 31, almost all cases were in Hubei, but within just 10 days, patients were reported in 20 provinces and in the following 10 days it spread to a total of 30 provinces, the researchers said.

The epidemic curve is showing signs of slowing, indicating measures such as restricting the flow of people, reducing human contact and disclosure of epidemic information at a high frequency through multiple channels may be helping to contain the outbreak, the paper said.

Some important questions remain unanswered, including the identification of animal hosts of the virus, infective period, transmission routes, effective treatment and prevention method, the researchers wrote.