By Dave Yin and Chen Lixiong 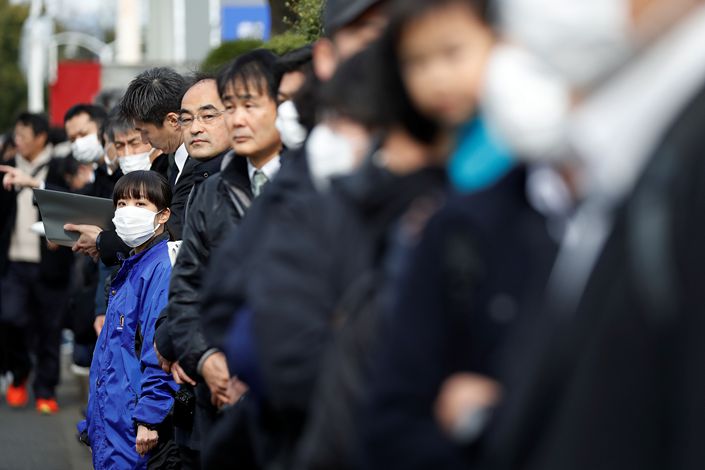 People wearing face masks wait for the start of a rehearsal of part of the Tokyo 2020 Olympic Torch Relay in Hamura, on the outskirts of Tokyo, on Feb. 15. Photo：VCG

It’s 6:26 p.m., Feb. 7. On Twitter, Matthew Smith, a passenger of the Diamond Princess cruise ship, shares a picture of what looks to be his dinner. Smoked salmon, bread, salad, mashed potatoes and even cake.

He, along with some 3,766 passengers and crew have been quarantined off the coast of Yokohama, Japan, due to the discovery of the new coronavirus among passengers. But unlike some of his neighbors, he did not mind the situation.

“You might have to drag me off the ship when the quarantine ends,” he captioned his meal.

Eleven days later, even after hundreds aboard the vessel have tested positive for the pathogen, now called Covid-19, Smith still appears to feel the same way.

Unlike most of the roughly 380 U.S. nationals aboard, he has declined an offer by the U.S. government to evacuate off the ship, which now hosts the largest Covid-19 cluster outside of China. As of Monday, two charter planes were en route from Japan to the U.S. Over the weekend, Canada announced similar plans to evacuate its own, and on Tuesday morning, Australian Prime Minister Scott Morrison and Hong Kong Chief Executive Carrie Lam said their governments would follow suit.

Since confining the Diamond Princess off the coast of the port city earlier this month, Japan’s number of Covid-19 infections, including those on the ship, has soared — first into the dozens, surpassing its then-relatively hard-hit neighbors in Asia, later rising into a class of its own, rocketing past 600 cases as of Tuesday.

By Tuesday evening, the number of confirmed infections on the Diamond Princess alone had reached 542. For some, the situation had long been seen as dire.

According to data from Japan’s Ministry of Health, Labour and Welfare, those aged 60 and above made up more than 80% of the ship’s guests. Following the Feb. 5 order for a 14-day quarantine during which passengers were confined to their rooms, many aboard no longer received bedding or had their rooms cleaned, and those in inner cabins without windows were forced to turn to air conditioning for ventilation, widely perceived as a cross-contamination risk.

During this time, Japanese health officials tested a few hundred individuals a day for the virus, mostly relying on contact tracing, rather than shifting to screen all onboard, despite finding dozens of positive cases each time. Until this past weekend, those that had tested negative for Covid-19 were still forced to stay on the ship along with those whose status was unknown.

“Honestly, the Japanese authorities do not show the innovative miracles that everyone expected from them and act in a chaotic, unsystematic manner,” Maria Zakharova, Russian foreign ministry spokesperson said on Russian radio last week, addressing concerns for the 24 Russian nationals reported to be onboard the Diamond Princess.

It’s not just the authorities’ handling of the Diamond Princess that has drawn scrutiny, though passengers now near the end of their quarantine, scheduled for Wednesday for most.

Across the country, the list of those infected no longer stop at taxi and bus drivers, tour guides, doctors and quarantine officers who have been in direct contact with the sick. After confirming its first death of a Covid-19 patient last week, the Japanese government admitted over the weekend that authorities couldn’t explain how a few of the country’s infected individuals had contracted the virus.

As of Sunday, the ministry still did not label Covid-19 as an epidemic in the country.

For one, Japanese officials directing the country’s health response do not have medical experience, he said. Before being elected to the House of Representatives, Kato was a long-time bureaucrat in the country’s Ministry of Finance, public records show.

The National Institute of Infectious Diseases, a body under the health ministry that has been tasked with Covid-19 screenings, is also ill-equipped due to its original function as a research organization. For it to conduct large amounts of health exams “was impossible right from the start,” Kami said.

Japanese researchers in interviews have cited the same bottleneck in the Yokohama region’s ability to confirm Covid-19 results in the lab that have been found elsewhere, namely in China.

“Even if all 83 medical institutes in Japan are factored in, only 1,500 samples can be screened,” Tohoku Medical and Dental University professor Mitsuo Kaku told Taiwan-based CommonWealth Magazine, adding that the country is also grappling with evacuees on four charter planes that have arrived from Wuhan, Hubei province, ground zero of the epidemic.

To address its backlog, Hubei became the only region in the world last week to also use chest x-rays to diagnose Covid-19 cases, resulting in a whopping 14,000 cases being added or reclassified in a single day. The move has been met with mixed reception.

In comparison, Japan’s approach is “passive, and one step behind,” the country's opposition party said.

But the country’s hands may be tied by past experience, when it, too, resorted to drastic measures.

In 2016, families of former leprosy patients launched a class action lawsuit against the government for decades of discrimination and forced quarantine faced by those with the disease. Until 1996, when Japan’s leprosy prevention law was repealed, thousands were rounded up and forced to live in remote sanatoriums. Japanese Prime Minister Shinzo Abe personally apologized for the segregation policy in July last year.

Meanwhile, some have argued that tourism has been one of the biggest successes of the leader’s economic policies, sometimes referred to as “Abenomics.” According to official targets, the country is aiming to bring in more than 40 million tourists this year and up to 60 million by 2030. Among them, Chinese travelers spend more on average than those of many other countries.

On Jan. 23, as China’s national government locked down Wuhan and nearby cities in an effort to quarantine millions of citizens, Abe projected optimism, saying in a Lunar New Year greeting that Japan looked forward to more Chinese visiting the island country. Coinciding with the friendly display was Japan’s preparations for an official state visit in April.

Yoshiro Mori, president of the organizing committee of the 2020 Tokyo Olympics, has also personally tried to reassure the public that safety measures were in place to allow the games to go ahead in July as planned.

For countries to no longer send athletes to compete in Tokyo 2020 on epidemic fears could spell disaster.

Still, researchers, such as those at the Tohoku University Graduate School of Medicine, have warned that the government must face up to the fact that local spread of Covid-19 is imminent, especially in light of recent cases that have no clear links to travelers.

To prepare the health system for this reality, they recommend shifting focus to treatment and lowering the mortality rate rather than containment. Some have also recommend tightening Japan’s border restrictions, which so far only bar those who have travel history in Hubei and Zhejiang provinces from entering the country.

“[Recent cases] strongly suggest that the transmission chain is already occurring in the country,” Oshitani Hitoshi, a professor in Tohoku’s department of microbiology wrote in an article. “It is necessary for the international community to work together to prevent the emergence of a ‘second Wuhan.’ We must learn the lessons of Wuhan's failure.”