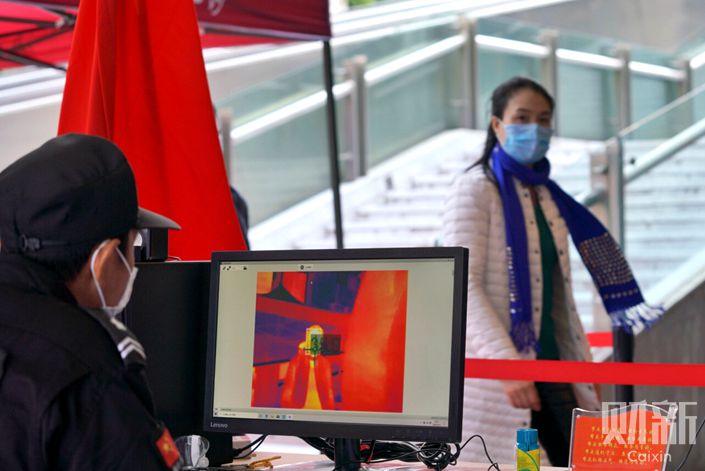 “We discovered that shedding of potentially infectious virus may occur in persons who have no fever and no signs or only minor signs of infection,” wrote the letter’s authors. Photo: Liang Yingfei/Caixin

As scientists worldwide race to understand the new coronavirus, ranging from its routes of transmission to infectiousness, two new studies are adding to the growing body of evidence that suggest carriers without symptoms are still contagious and that the disease kills more men.

A letter published Tuesday in the prestigious New England Journal of Medicine says that people infected with Covid-19 may be contagious despite being asymptomatic.

The letter’s authors, two dozen physicians from various Frankfurt institutions, also said that based on their findings, the widespread practice of relying on symptom-based screening for the disease may not be effective at preventing its spread.

Lab results from two individuals that have tested positive for Covid-19 since their repatriation from China to Germany identified “potential infectivity” in their cell culture samples, referring to the ability of a pathogen to establish an infection.

Yet both patients, who were among 126 individuals Germany evacuated on Feb. 1 from the Chinese city of Wuhan, the epicenter of the epidemic, had passed multiple symptom-based screenings prior to their departure and upon their arrival, before they were confirmed positive through a genetic analysis technique called reverse transcription polymerase chain reaction.

“We discovered that shedding of potentially infectious virus may occur in persons who have no fever and no signs or only minor signs of infection,” wrote the article’s authors.

Viral shedding refers to the pathogen’s spread to other cells, parts of the body or the environment, making an individual contagious.

Meanwhile, according to a study (link in Chinese) published Wednesday by the Chinese Center for Disease Control and Prevention, an agency under China’s top health authority, men have a much higher likelihood of dying from Covid-19 than women.

Based on an analysis of laboratory diagnoses, it concluded that, in this time period, the “crude fatality rate” for men was 2.8% while for women it was 1.7%, with an overall fatality rate of 2.3%.

Of the laboratory-diagnosed infections, men accounted for 51.4% of cases overall and 63.8% of deaths.