Coronavirus Outbreak in Africa Could Be Imminent, Researcher Says 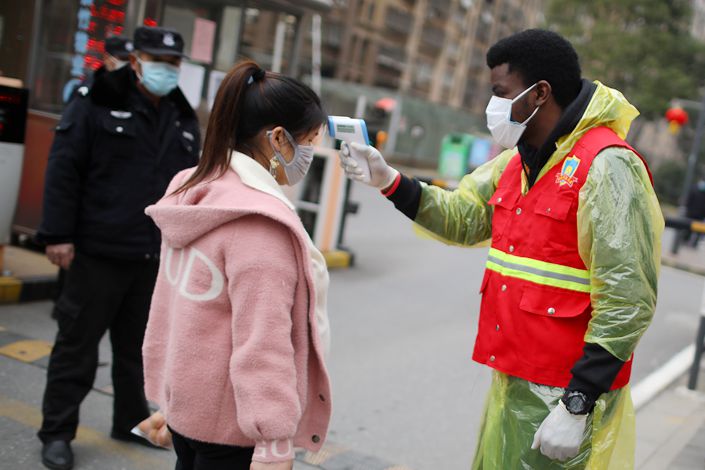 An international student from Nigeria volunteering in Nanjing takes the temperature of people going in and out of a residential community. Photo: China News Service

A new study assessing African nations’ vulnerability to the new coronavirus has identified Nigeria and Ethiopia as being at the highest risk, and though few cases have been reported so far, a consultant on China-Africa relations said that the spread of the disease on the continent could be imminent.

A study published Wednesday in The Lancet, a prominent weekly peer-reviewed medical journal, compared data on air travel volume between several Chinese provinces and individual African countries to a number of internationally recognized measurements of medical preparedness and disease vulnerability.

It said that while Egypt, Algeria, and South Africa were the most likely to import the disease as they have the highest volume of air traffic from parts of China with coronavirus outbreaks, they were also the countries with the highest capacity to respond.

Meanwhile the study said the risk of importing the disease was moderate for Nigeria, Ethiopia, Sudan, Angola, Tanzania, Ghana and Kenya, but these countries’ capacity to deal with the virus is lower, making them more susceptible to outbreaks.

As of Thursday, only one country on the continent — Egypt — had reported a case of Covid-19. However, according to Hannah Ryder, CEO of Development Reimagined, a China-based development consultancy specializing in Africa-China relations, outbreaks could be imminent.

“If you look at a few pandemics that originated in countries other than on the African continent, like H1N1 and MERS, it was actually quite a while, a month or so before Africa felt the effects and had their first victims,” Ryder said. “The fact that Egypt has one case now just illustrates that it’s about now that we should be looking out and countries should be getting quite serious about this, and as many as possible.”

However, she criticized the study, saying that it overlooked several factors that can affect outcomes for African countries.

For one, the study’s authors, who hail from France, Belgium, Côte d’Ivoire and the U.S., omitted flight data from Hubei, the central Chinese province that is the epicenter of the epidemic, on account of the region’s travel bans implemented on Jan. 23. However, Ryder says that most of the estimated 4,600 African students in Wuhan, the Hubei city where the virus is thought to have originated, will have traveled prior to the lockdown on account of the Lunar New Year holiday in late January.

The study also does not factor in non-air-based travel, and also overlooks travel among African countries and their porous borders, Ryder says. This porousness complicated the recent Ebola outbreaks, she added.

Furthermore, she said, that while weighing countries’ capacity to respond to the virus, the study’s authors should consider their experience in dealing with epidemics such as Ebola. While several countries’ health systems rank low by international standards, because of recent experience, they understand quarantine measures and preparedness.

“That kind of knowledge only comes from a real deep understanding of what’s going on in the African continent,” she said.