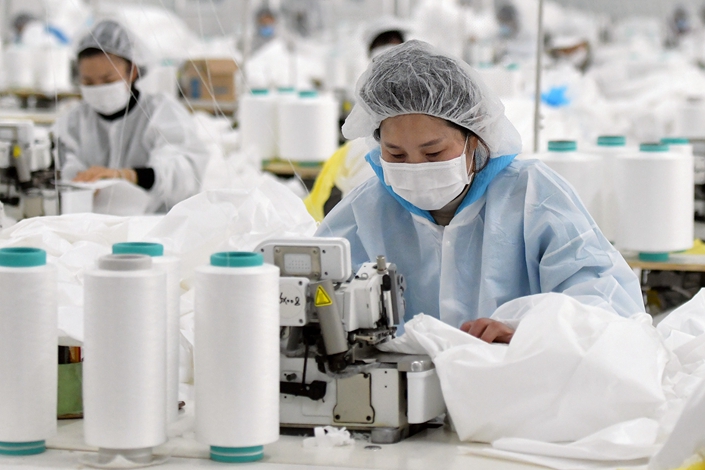 On Jan. 17, Li Yi (pseudonym), the owner of a protective face mask factory that employs more than 100 workers in Central China’s Hubei province, the epicenter of the new coronavirus epidemic, shuttered his factory for the Lunar New Year holiday, just like every year.

Li had heard rumors earlier in the month about the outbreak of a deadly pneumonia in the provincial capital of Wuhan, over 100 kilometers (62.1 miles) away from Xiantao, but they were quickly dismissed by the authorities as being “containable and preventable.” So, rather than stock up on extra raw materials, Li, who had a trip to Dubai planned for the holiday, purchased just enough for two weeks of production.

The orders started pouring on Jan. 20, three days after his workers left for the holiday. “On Jan. 19, there wasn’t even a single call. All of sudden, people from Wuhan were calling to buy masks. Very soon, people from other cities in Hubei were calling up. More and more calls every day. The number of calls was just unbelievable,” Li said.

The 200,000 particle-filtering masks in his warehouse, usually produced for export, sold out in four days. At first, the buyers were government agencies and government-affiliated institutions, followed by charities and individuals. By Jan. 26, the day after Lunar New Year’s Day, customers had placed orders for 5 million masks.

Like other producers in Xiantao, one of China’s production centers for such masks, Li received a government directive instructing him to produce masks for the domestic market, even though his company did not have a license to do so.

One mask factory in Xiantao managed to reopen on Jan. 22, for which it was praised effusively in the press. Finding workers was hard, however. Even though Li offered wages three times higher than normal, locals were reluctant to go back to work.

On Jan. 23, the government of Wuhan ordered the airport and train station closed and took other measure to lock down the city. “People in Wuhan started to feel the shortage of medical supplies,” Li said.

On Jan. 26, his factory reopened. In three days, he phoned his supplier, which hinted the two parties might need to renegotiate the price and payment clauses in the contract they signed earlier in the year. Even then, there was no guarantee Li could get all the raw materials he needed. Li paid 2.5 times the contract price, but his supplier still refused to ship the goods. “The first time, I had to rent a vehicle and oversee the loading and transportation of the raw materials,” Li said.

Even the rental vehicle cost four times the normal rate.

The price of masks also surged. Within a few days, factory-gate prices had jumped threefold. At stores, prices were 10 times higher than normal.

On Jan. 28, the fourth day of the lunar year, government officials placed an order. Meanwhile, following the emergence of confirmed infections in Xiantao, the government began to institute restrictions. Li received notices about vehicle and traffic controls. At first, he just needed a special pass to drive on national highways. But soon he needed one for provincial highways, then county roads, then village roads. Eventually he had to get a pass to drive on any road. The passes required him to obtain official stamps from the health commission, the town government and the Xiantao Municipal Government.

In addition to the orders from the government, he also accepted orders from individuals. “We can produce nearly 100,000 masks in a day at full capacity,” he said.

As the factory pressed ahead full steam, another problem emerged. On Feb. 4, the factory was ordered to stop production because it didn’t have a license to produce surgical masks. Li again told the workers to go home.

On Feb. 4, Xiantao’s government designated 60 companies as qualified producers of medical supplies, including 28 mask producers. The others had to remain closed until Friday.

Although there are more than 200 mask producers in Xiantao, only 10% or so are qualified to produce surgical masks. After the government shut down the makers of nonsurgical masks, Xiantao’s mask production capacity was cut in half.

Another twist came a day after Li sent home his workers. On Feb. 5, the Hubei Market Supervision and Administration Bureau issued a notice requiring nonsurgical mask producers to expand their capacity to meet market demand.

To comply, Li’s factory, along with 90 other manufacturers, submitted product samples to the government on Feb. 6. But even before the results came back from the quality control tests, the Xiantao government told Li on Feb. 8 that he could go ahead and resume production anyway.

On Feb. 12, his company and 23 other producers of masks for non-hospital use were up and running again, all to fill orders from the government.

On Jan. 23, the day Wuhan was locked down, Zhou Hongwen (pseudonym) closed his chemical plant for the holiday, sending his workers home. People in Jingmen, a city about a three-hour drive from Wuhan, thought things in the provincial capital did not have much to do with them.

On the second day of the lunar year, Jan. 26, disease control centers in the provinces of Guizhou and Sichuan, as well as the municipality of Chongqing, reached out to Zhou, whose company makes calcium hypochlorite, the active chemical in bleach and other disinfectants. Along with the state-owned oil giant China Petrochemical Corp., companies like Zhou’s make up one of the city’s major industries.

However, Jingmen had been cut off from other cities since Jan. 24. With the exception of supplies to fight the epidemic, no movement of goods was allowed. On Jan. 30, the local government body overseeing efforts to fight the epidemic ordered Zhou to set aside the disinfectants his company had produced so they could be used locally. But his inventories were shrinking, so he applied to reopen his factory to produce more disinfectant. The request was refused on the grounds that the products were not essential for containing the coronavirus outbreak.

The entire petrochemical industry in Hubei was not allowed to resume production until Feb. 14. Later, the prohibition was extended to Feb. 25.

Zhou argued that it wasn’t so hard to come up with a solution that would both help contain the outbreak and allow products to be transported outside the city. “It is easy to control the spread of the virus during transport if the drivers do not get out of their trucks,” he said. “But now the entire industry is shut down. There aren’t any trucks or any drivers, and the roads are closed. Even if we are allowed to resume production, what can we do if the roads are still closed?”