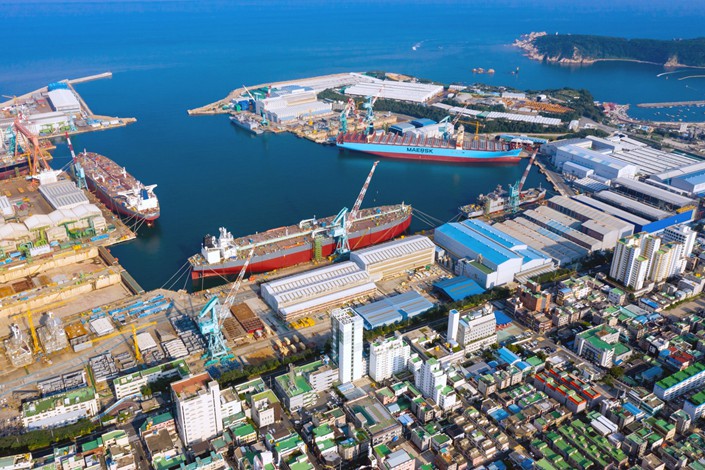 Residential houses and apartment buildings stand as ships sit docked and under construction at the Hyundai Heavy Industries Co. shipyard in the background in this aerial photograph taken above Ulsan, South Korea, on Aug. 4, 2019. Photo: Bloomberg

“The coronavirus appears to have hit trade quite a bit,” said Lee Hong-bae, a professor of international trade at South Korea’s Dong-Eui University. “The fall in both exports and imports with China shows the supply chain is sputtering, and it probably won’t be until the second half of the year we see it back on track.”

South Korea’s overall exports rose 12% during Feb. 1 to 20, boosted by calendar distortions. The timing of the Lunar New Year holiday added three business days to the month this year in many Asian economies, roughly a 25% increase in work time compared with 2019 in basic terms.

Before the epidemic spread within and beyond China, global trade recovery had been forecast for early 2020. Now that picture is getting upended, with policy makers scrambling to gauge the enormity of the fallout and the measures needed.

Central banks in Asia have stepped up action, with Indonesia, Philippines, and Thailand cutting rates recently, and others like Singapore planning significant fiscal stimulus. Speculation is rising that the Bank of Korea could deliver a cut next week.

“The data is likely to understate the extent of the fall in Chinese demand,” said Rory Green, an economist at TS Lombard before the customs report. “A prolonged shutdown then evidently will weigh on Korea’s own exports.”

South Korea’s President Moon Jae-in warned the impact from the novel virus could be bigger and longer-lasting than a 2015 epidemic that killed 38 people in South Korea and hit growth. Back then, the central bank responded with a rate cut and the government enacted an 11.6 trillion won ($9.8 billion) extra budget.