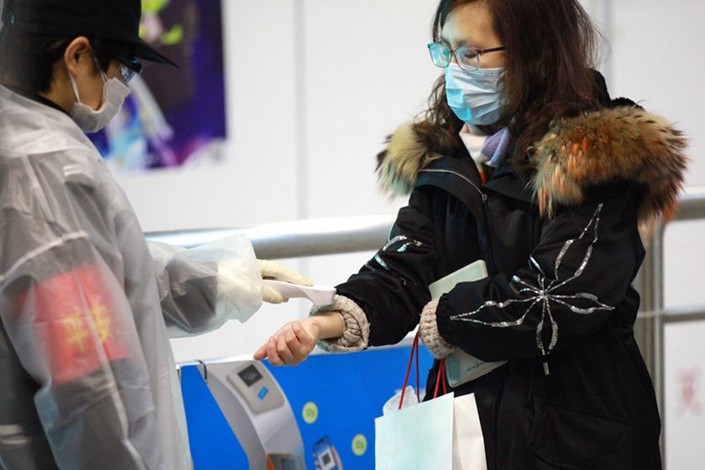 A commuter gets her temperature taken when entering the subway in Nanjing, East China's Jiangsu province, on Feb. 19. Photo: IC Photo

China’s efforts to control the spread of the new coronavirus have once again revealed the power of social action.

At the start of the epidemic, people both in China and abroad responded to the severe shortage of medical supplies by making huge quantities of donations. A flood of volunteers across the country joined in with community health screenings, while some traveled from far-flung areas to the worst-hit province of Hubei.

In Wuhan, the 11 million-strong city at the epicenter of the outbreak, locals were even more proactive. Hundreds of drivers ferried exhausted medical personnel home in the middle of the night; some actively dispensed public health advice to those around them. The scenes brought to mind the tragic Wenchuan earthquake, when large numbers of do-gooders waded in to provide assistance in the disaster zone.

We shouldn’t ignore such actions performed by average Chinese people during the outbreak so far. However, due to systemic restrictions, this power is far from realizing its full potential. Despite the donations, voluntary action has remained scattered and spontaneous, while the voices of specialized disease-control NGOs and other social organizations remain extremely weak.

It is essential for China to listen to these voices as disease control moves into its next stage. In the longer term, too, the abovementioned forces will play a vital role in our public health system and the prevention and testing of infectious diseases.

Currently, people have few ways of participating in a public health system dominated by the government. This epidemic is an opportunity to finally involve social actors with specialized capabilities.

Countries around the world have long looked to nongovernmental players for help on matters of public health and safety. Indeed, China’s own law on controlling infectious diseases includes a line about “relying on the masses” being an important principle.

In practice, that means relying on actors outside government. In the past, “replying on the masses” was frequently linked with the country’s social and political campaigns. But in the 21st century, it more often shines through in the form of efficient action, specialized knowledge, and the capacity of people to self-organize.

Article 9 of the abovementioned law states that China supports and encourages work units and individuals to participate in the prevention and control of infectious diseases. Governments at all levels should improve the relevant systems so that these actors can more easily raise awareness of public health, report disease outbreaks, provide volunteer services, and organize donations. However, progress on this front remains slow. As a result, whenever disaster strikes, people’s talents have a limited number of outlets and struggle to sustain themselves in the long term.

Epidemics are brief, urgent, and unique situations. But in normal times, too, we should seek to utilize people power to support our health systems. When public health and safety is up to snuff, we can not only discover and report epidemics early, but also rapidly mobilize people to join in with control efforts.

Governmental and nongovernmental power don’t exist in opposition, but can coexist and complement each other. Where governmental mechanisms fall short, people-driven methods can make up the shortfall, giving rise to an organic, comprehensive system of public health.

For all kinds of complex reasons, nongovernmental organizations have had a rough time in China over the past few years. The new coronavirus epidemic is a severe warning. Once the outbreak settles down, China will need to recalibrate its public health system. A renewed focus on social actors should be part of that agenda.

To start with, we must genuinely implement the principle of relying on the masses and continuously inject people power into public health by improving the relevant mechanisms. Legal language must not end with principles or slogans.

In practice, places like Shanghai have already tried this out. The city’s official methods for preventing and curing infectious diseases clearly include social participation, encourage voluntary action by nongovernmental forces during disease control work, and establish a mechanism for purchasing the relevant prevention and control services.

A host of social organizations specializing in disease control have also appeared in Shanghai, apparently in the wake of the 2003 SARS epidemic that sickened thousands of people in southern China and killed 774 worldwide. Shanghai’s relatively stable response to the epidemic so far is not unrelated to the initial participation of nongovernmental actors. However, even there, such mechanisms are still not clear and comprehensive enough, and the scale of social participation could be larger.

Government departments in all areas must thoroughly eradicate suspicion of popular organizations and connect social participation to every aspect of public health. The problem of pinning down the total number of coronavirus cases in Wuhan during the current epidemic has caused extremely severe consequences. With the inclusion of social organizations, we might have obtained the true figures more quickly. Even if governments and communities at any level shirk their responsibilities or come up against awkward difficulties, social organizations can help to relay information to the higher authorities and explain to everyone where the reasons lie.

It is critical to ensure the free flow of transparent information during public health scares, because they endanger public safety and everyone’s individual health. In the end, those with the best motivation for seeking the truth are the common people left potentially vulnerable to it.

Of course, public health is not the only sector in which social participation is lacking. At the moment, social organizations still face real difficulties in areas including registration and regulation. How to loosen the strictures at a systemic level is an important part of deepening China’s reforms and the precondition and basis for the true expression of social forces.

In modern societies, public health is a sprawling system closely bound up with multilevel, three-dimensional social support. The development of nongovernmental actors is therefore an organic component in the modernization of social governance. Whether or not we can trust, cultivate, and express popular power is an important manifestation of our administrative capacities. A thriving nongovernmental sector is therefore crucial to a harmonious, vivacious society.