Italy Rolls Out Most Stringent Epidemic Measures Outside of China 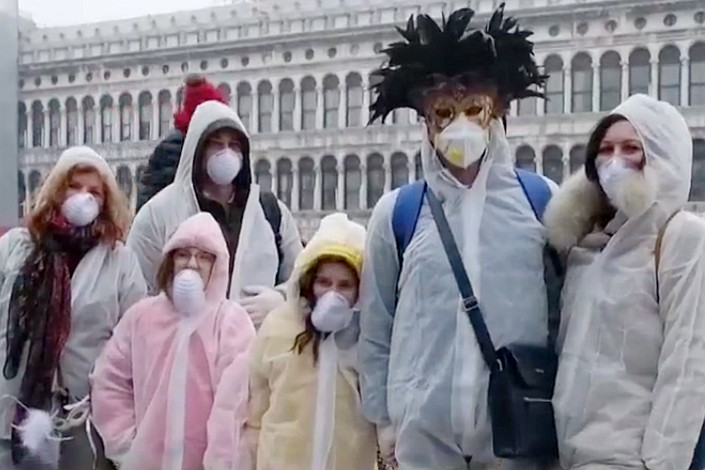 Inside grocery stores, rows upon rows of shelves sit empty. Outside, shoppers wearing masks and scarves over their faces pushing large empty carts still queue up, ready to buy what is left. Many are reacting to or anticipating lockdowns in communities that had, until days ago, seemed to be spared from the new coronavirus epidemic.

What would be a familiar scene in China is instead taking place some 8,000 kilometers away in Italy, which has been hit harder by Covid-19 than any other European country. Since Friday, Italy has gone went from confirming less than a handful of cases to locking down cities to contain the virus. As of Monday, local media reported more than 150 infections and three deaths.

On Sunday, the Italian government announced some of the most stringent emergency measures yet taken outside the Chinese mainland, giving municipalities and other jurisdictions in the Lombardy and Veneto regions of northern Italy, including Venice and Milan, a broad mandate to control the spread of the virus.

In the event that at least one resident of a city tests positive for the virus with an unknown source of transmission, cities have been instructed to restrict transportation; suspend public events and demonstrations in both public and private places; shut schools; suspend work and commercial activities; enforce quarantines, surveillance and health reporting; require the use of protective equipment when accessing public services, and more.

“The relevant authorities are required to take all appropriate containment measures proportionate to the evolution of the epidemiological situation,” the Italian government said in a statement. “Failure to comply with containment measures will be punished pursuant to … the Criminal Code.”

Over the weekend, a dozen towns were locked down, affecting an estimated 50,000 people. On Sunday, authorities in Venice shut down Carnival ahead of schedule, cutting short a festival that draws approximately 3 million visitors each year. Even outside of the affected areas, businesses and schools have shut, and events like sports competitions have been cancelled, according to media reports. Across the country, school trips have been suspended.

At least one Italian resident, who lives in Modena, which has not been subject to emergency measures, told Caixin that his business has already been affected.

Italy’s outbreak has also sent ripples through other countries.

As of Saturday night, Romania is requiring quarantine for those arriving in the country from Lombardy and Veneto. On Sunday, Austria temporarily suspended rail service from Italy in light of two suspected infections aboard a train, although both passengers later tested negative. Neither Austria nor Romania has reported any Covid-19 infections.

The U.S. Centers for Disease Control and Prevention (CDC) issued a “Level 1” travel advisory for Italy, the lowest of three degrees of caution. The CDC has issued “Level 2” warnings for South Korea and Japan, the only other countries with hundreds of cases.

“The army has made available 3,412 beds in over a thousand rooms, while the Air Force has given about 1,750 of them,” he said at a press conference. “We have also done regional surveys of hotels,” he added, “and we are ready to use them.”

There is room for things to get worse, according to Alessandra Mularoni, director of the Infectious Disease and Infection Control Service at Italian research center ISMETT, although she refrained from calling the disease a pandemic.

“These extraordinary measures in northern Italy are essential to limit the outbreak and may need to be replicated in other regions in the next days,” she said.