By Liu Yanfei and Isabelle Li 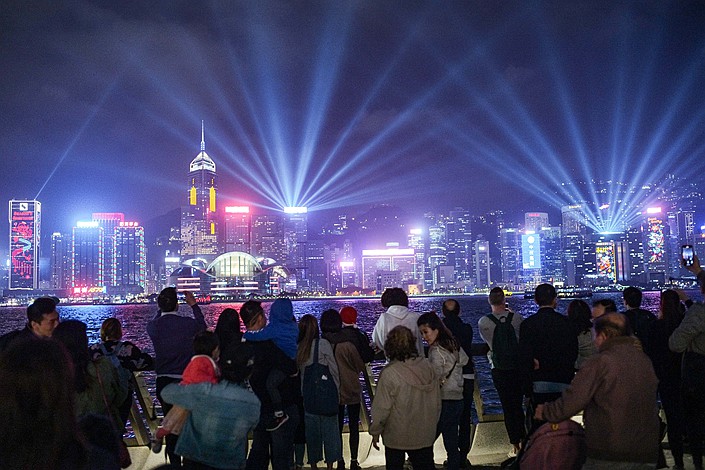 Despite failed experiments with electric taxis and buses, Hong Kong is charging ahead with a new batch of trials involving electric ferries and minibuses, as well as charging infrastructure in private car parks, in its bid to become more environmentally friendly.

In its latest annual budget released Wednesday, Hong Kong earmarked HK$80 million ($10.3 million) for a pilot program for electric public light buses, and HK$350 million for electric ferries, both set to be carried out in 2022 and 2023.

In addition, another HK$2 billion will be used in a pilot program to subsidize the installation of charging-enabling infrastructure in the parking lots of private residential buildings that meet certain qualifications.

The annual budget plan didn’t disclose details for the electric light-bus plan. But a source close to the government told Caixin the trial will begin with around 40 green light buses.

Light buses, with around a dozen seats each and divided into different color-coded categories, serve over 1 million passengers every day in Hong Kong, complementing subways and larger buses. Nearly 3,300 green light buses were operating in the densely populated city as of April 2018, government data showed. In 2017, they carried around 1.52 million people each day.

The other part of the public transport trial will see Hong Kong’s four operators of ferries, a major component of the city’s public transportation system, each put one route in the program for 24 months, according to the source.

Electric ferries are not widely used around the world, with only a handful of countries like Denmark, Finland, Iceland and New Zealand now using the form of transport.

The minibus and ferry programs are part of Hong Kong’s goal to promote electric vehicles, even though previous trials have met with poor results. In 2011, the government set aside HK$300 million for a pilot program promoting electric vehicle use for taxis and logistics vans. But the plan didn’t go well, and the city’s last electric taxi was retired in late 2018.

The government previously also allocated HK$180 million for a program involving 36 electric buses. But issues involving battery life and mileage requirements failed to meet the needs for bus rides around the city, according to a report by the chief of Hong Kong Environment Bureau in late 2018.

Hong Kong currently ranks second among all major cities in Asia in terms of electric car ownership as a percentage of private cars. At the end of 2019, there were 13,600 privately owned electric vehicles on its streets, accounting for 2.1% of the city’s total, the highest in Asia except for Beijing.