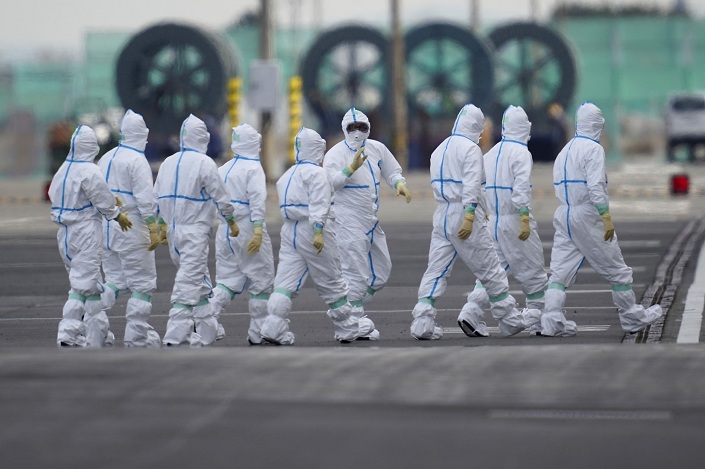 Workers in protective gear prepare to board the Diamond Princess cruise ship.

(Bloomberg) — A 78-year-old man with coronavirus died in a Perth hospital, marking Australia’s first fatality, after returning from the Diamond Princess cruise ship off the coast of Japan last month.

The man was initially sent to the Howard Springs facility in northern Australia after becoming ill on the flight back from Japan and was then moved to the Sir Charles Gairdner Hospital in Perth where he died Sunday morning. His 79-year-old wife, who also tested positive for the virus, remains isolated in the hospital in a stable condition and there is no risk to the community, said Andrew Robertson, Western Australia’s chief health officer.

Elsewhere in the country, two new cases emerged in recent days in Sydney and the Gold Coast after a man and a woman returned from trips to Iran. Australia over the weekend banned incoming travel from Iran for non-nationals, and Health Minister Greg Hunt said he has asked the deputy chief medical officer, Paul Kelly, to consider the appropriate level of travel advice for Italy. Restrictions on travel from the Chinese mainland were extended last week.

“Right from the outset, we’ve made it clear that we will take strong action, but that Australia is not immune,” Hunt said in Melbourne on Sunday. There are now 27 confirmed coronavirus cases in Australia, he said.

The death comes just days after the Australian government activated an emergency plan to deal with the outbreak, when Prime Minister Scott Morrison said the risk of a global pandemic is “very much upon us.” The epidemic saw the U.S. record its first fatality from the virus on Saturday and cases increased in France, Italy and South Korea.