Travelers Begin Importing Coronavirus to China From Other Hard-Hit Countries

By Zhang Fan and Denise Jia 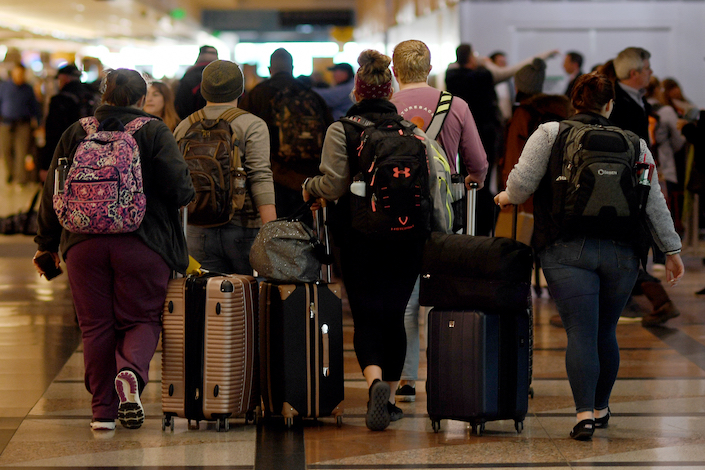 New cases of deadly coronavirus in other countries have outnumbered those in China for several days. Photo: VCG

Even as new coronavirus infections have been declining in China, cases imported from abroad have been rising. As of Monday, there were six confirmed cases linked to Italy, Iran and London, a development that one expert called “very worrisome.”

The eastern province Zhejiang Monday reported its first such case involving a patient who recently traveled to Italy. This was the province’s only new confirmed case Monday.

The Zhejiang government lowered its emergency response level from one to two, becoming the 19th province in China to dial down its official threat rating. Twenty-five other provinces reported no new cases Monday, suggesting the epidemic is largely contained outside the epicenter Hubei province.

Meanwhile, the spread of the disease is accelerating in the rest of the world. As of Monday, the virus spread to 65 countries on every continent except Antarctica. It infected more than 9,500 people and killed 145, with Italy, Iran and South Korea emerging as new hotspots for Covid-19, the official name for the pathogen.

The United Nations’ World Health Organization raised its coronavirus threat assessment to the highest level Friday as countries besides China now account for about three-quarters of new infections. Now there are signs that some infections are coming back to China from overseas. In recent days, Beijing, Ningxia and Shenzhen found five confirmed cases linked to Iran and London.

The northwestern Ningxia Hui autonomous region’s health authorities said Feb. 26 that they found two cases of infected travelers returning to the region from Iran. The travelers had passed through Shanghai and Beijing en route to Ningxia. Three days later, Beijing reported two cases that had close contact with one of the Ningxia patients. Shenzhen reported Sunday a case involving a traveler coming from London.

At first it was believed that once the epidemic was contained in China, the rest of the world would be safe, said Zhang Wenhong, director of the department of infectious diseases at Shanghai Huashan Hospital, affiliated with Fudan University. Now, new cases abroad have outnumbered those in China for several days.

“This is a bad sign and very worrisome,” Zhang said. “It will bring difficulties to China’s outbreak control.”

Local governments have taken measures to curb the backflow of infections. Beijing health authorities ordered Friday that people who have come from or been to other severely affected countries stay home or under observation for 14 days after arriving in Beijing.

Statistics from the National Immigration Administration showed that an average of 1,300 South Koreans entered China each day since Feb. 23. South Korea has had 26 deaths and reported an additional 599 infections Monday, increasing its tally to 4,335, the most outside China.

Airlines have reduced flights between China and Japan and South Korea, but China hasn’t implemented bans for travelers from any countries. Travel bans are impossible and inadvisable under current circumstances, said Liang Jianzhang, chairman and co-founder of the Chinese online travel company Ctrip. No country can afford to be isolated from the rest of the world, and the Chinese government needs to find the best balance between epidemic control and normal foreign communications, he said.