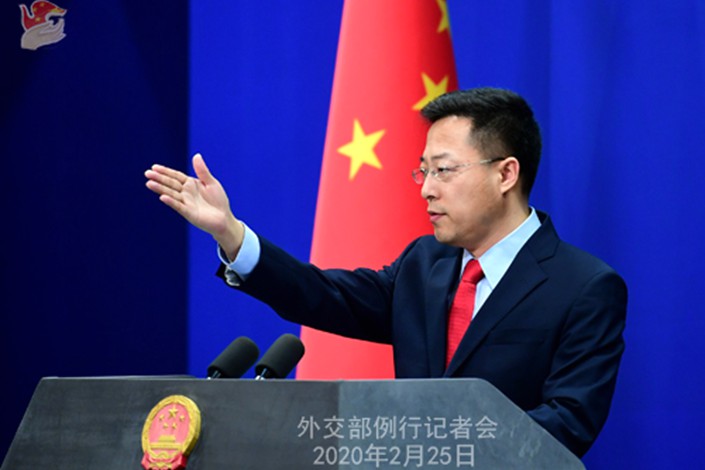 The United States has dramatically reduced the number of Chinese citizens permitted to work for Beijing’s state-run media outlets in the U.S. and plans to restrict how long Chinese journalists can remain in the country, marking the latest salvo in the two countries’ squabbles over press restrictions.

U.S. Secretary of State Mike Pompeo said Monday in Washington that the move is intended to “establish a long-overdue level playing field” amid curbs on foreign journalists in China. “We urge the Chinese government to immediately uphold its international commitments to respect freedom of expression, including for members of the press,” Pompeo said.

Chinese foreign ministry spokesperson Zhao Lijian said at a regular press briefing Tuesday that the decision was “based on Cold War-era thinking and ideological bias.”

The move comes after Beijing threw out three Wall Street Journal reporters last month amid an outcry over a headline on one of the American broadsheet’s opinion pieces that was perceived as racist. None of the expelled journalists worked on that article.

They would be allowed to collectively employ no more than 100 Chinese nationals in the U.S. from March 13, approximately 60 fewer than they now have. Xinhua will see its quota cut to 59 Chinese personnel, CGTN to 30, China Daily to nine, and CRI to two. Hai Tian does not currently employ any Chinese nationals.

The U.S. will not impose restrictions on what those organizations can publish or cap personnel numbers at other Chinese media outlets, Pompeo said.

Additionally, the U.S. will impose new restrictions on the press credentials issued to Chinese nationals in the United States, a Trump administration official said at a separate briefing.

Currently, Chinese reporters in the U.S. who hold “I” visas issued to members of the foreign media may enter the country once every three months and stay for as long as they are employed by the outlet sponsoring them. Those terms may be changed in the coming weeks, the official said, without being specific.

The U.S. issued some 425 “I” visas to Chinese nationals in 2019 compared with 100 visas issued by Beijing to American journalists at international media outlets in China, the U.S. official said. In recent years, several foreign reporters in China have said the terms of their visas have been tightened.

On Feb. 18, the U.S. State Department recategorized the five abovementioned media outlets as “foreign missions” for falling under the control of the Chinese government, a decision that Beijing said may provoke retaliation.

The following day, in a rare move, China revoked the credentials of three Beijing-based Wall Street Journal reporters. They were Deputy Bureau Chief Josh Chin and reporter Chao Deng, both of whom are U.S. citizens; and reporter Philip Wen, who is Australian.

Foreign ministry spokesperson Geng Shuang said at the time the evictions were punishment for the Journal’s failure to apologize for a Feb. 3 opinion piece criticizing the Chinese government’s handling of the ongoing Covid-19 epidemic. That piece was published under the headline “China Is the Real Sick Man of Asia,” a title that Geng condemned as “racially discriminatory” and also generated controversy in the U.S.

The term “sick man of Asia” emerged in the late 19th and early 20th centuries when foreign powers repeatedly took advantage of a weakened China, events that are viewed as a period of national humiliation by many Chinese today.