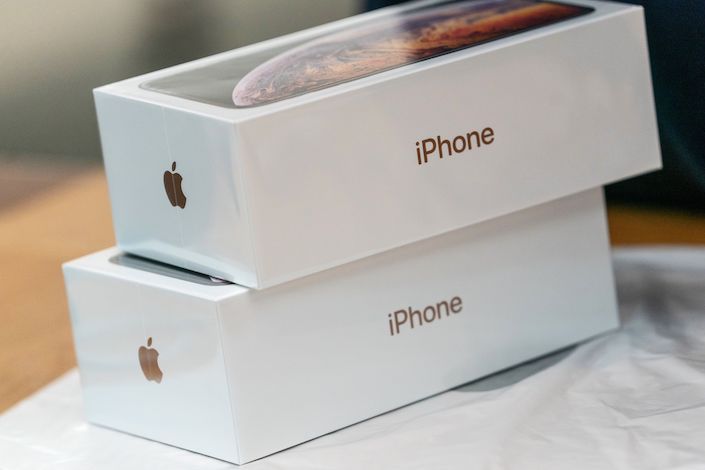 Boxes of the iPhone XS sit at an Apple store during its launch in Hong Kong. Photo: Bloomberg

The Taiwanese company, which assembles the majority of the world’s iPhones from China, joins a growing number of companies planning a return to normality in the world’s No. 2 economy. Beijing has curbed the spread of an epidemic that erupted in January and forced millions to work from home, tangled up logistics and dented economic growth.

Hon Hai said Tuesday its factories are now operating at about 50% of seasonal capacity but should ramp up over the course of the month as workers stream back into its plants.

Still, Chairman Young Liu warned that it remained difficult to quantify the full impact of the weeks-long disruption or gauge the effect on final demand for the swathe of consumer electronics it makes from laptops to game consoles. Business across all of Hon Hai’s four major divisions should decline in the March quarter compared with the previous year, meaning sales in the first half could end up being flat, Liu told investors and reporters on a conference call.

“There’s not a huge hit on demand yet so far, but I dare not and don’t want to predict the outlook of the outbreak,” Liu said. “We don’t see a huge issue with our suppliers, and we are helping them to secure resources.”

As China’s largest private employer and a key partner to many of the world’s most recognizable consumer brands, Hon Hai — also known as Foxconn — has become a symbol of how the outbreak could disrupt the global supply of made-in-China electronics. Apple scrapped its revenue guidance for the March quarter because of the work slowdowns and shrinking demand, showing that the outbreak was taking a bigger-than-predicted toll on one of the world’s most valuable companies.

Foxconn has already slashed its 2020 revenue projections in the wake of the epidemic. The contagion has disrupted Apple’s carefully calibrated production chain. Hon Hai was forced to postpone the reopening of its “iPhone City” mega-complex in the central city of Zhengzhou while it imposed strict quarantine measures on thousands of laborers. But Foxconn has since sharply raised signing bonuses to attract the new workers it needs.

The first quarter is typically a lull for Apple and Foxconn as most iPhone sales occur over the holiday season. But Foxconn’s supply chain turmoil coincided with the planned launch of Apple’s cheaper iPhone SE2, slated for launch as early as this month. On Tuesday, Liu deflected questions about the gadget, saying only that Foxconn’s product research and development efforts were proceeding.

Liu also confirmed that Foxconn was considering reducing its annual revenue outlook. Hon Hai is projecting a sales increase of 1% to 3% this year, Liu told Bloomberg News in a text message last month. That was down from a Jan. 22 forecast for 3% to 5% before the epidemic spread around the globe, and it lagged the average of analysts’ projections at the time. Analysts project that Hon Hai will post 4.9% topline growth in 2020.

Chinese companies have started returning to work, heeding a call to safeguard economic growth — though often not at full capacity. Hon Hai, which also makes products for companies including HP Inc. and Sony Corp., said it is restarting facilities throughout China in an orderly manner. Other key tech and Apple suppliers with major Chinese operations, such as Quanta Computer Inc., Inventec Corp. and LG Display Co., are also gradually bringing their factories back online.

“As of today, the production resumption has reached 50% of seasonal required capacity. Based on the current schedule, we shall be able to reach full seasonal capacity by the end of March,” Hon Hai said in a stock exchange filing. “There are still plenty of uncertainties which we cannot quantify around the potential impact on the full year.”

Apple’s China-focused supply chain has faced two major tests — first from trade tensions and more recently from manufacturing suspensions spurred by the spread of the coronavirus. China is also Apple’s biggest international market, and smartphone sales there are expected to take a big hit from the outbreak after government-imposed containment measures snarled logistics and closed stores.

Research firms vary in their estimates of how big the shipments drop-off will be but agree it will hurt. Strategy Analytics forecasts a 32% decline in Chinese shipments in the first quarter, to 60 million from roughly 89 million shipments a year earlier. Canalys, starting from a similar estimate for 2019, scythes its expectations down to 42.5 million shipments.