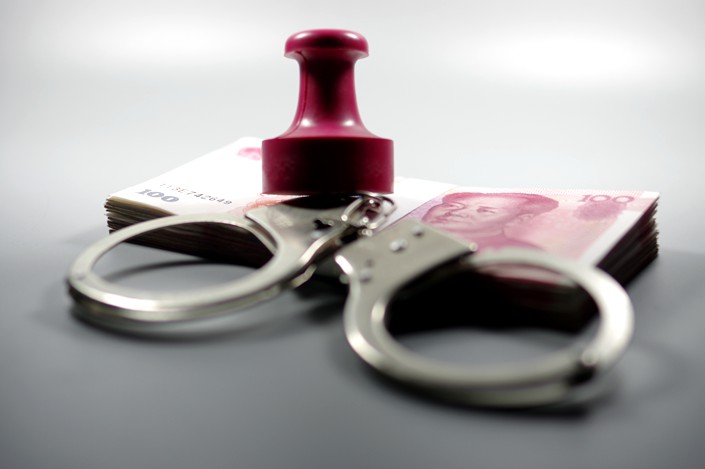 A former manager at the head office of Bank of Communications Co. Ltd. — one of the country’s biggest state-owned commercial lenders — has been sentenced to nine years in prison for taking bribes and embezzlement in a case the country’s anti-graft watchdog described as petty corruption.

The punishment of Yu Tao, a former senior official in the bank’s Employee Department and the secretary of its Communist Youth League Committee, was announced in a judgement handed down by the Shanghai Pudong New District People’s Court on March 5.

Yu was convicted on seven charges of bribery, the court said. He abused his power as a manager in the bank’s employee department with responsibility for procuring services for a range of employee benefits and events, asking for and accepting bribes totaling more than 10.72 million yuan ($1.54 million), and embezzling 820,000 yuan from the bank.

A source at Bank of Communications told Caixin that Yu worked for the bank’s trade union department and was in charge of organizing activities and events for the bank’s union and Communist Youth League Committee. Investigators found 8 million yuan in cash in the freezer at Yu’s home, reminiscent of a scene in Chinese anti-corruption TV hit series “In the Name of the People” broadcast in 2017, bank employees were told in an internal meeting, sources who attended the briefing told Caixin.

According to the court judgement, Yu took more than 7.2 million yuan from Shanghai Xinrui Industrial Co. Ltd. from 2012 to 2019. He was also found guilty of making illegal gains from organizing employee competitions at the bank and buying prizes for the events. In return for cash from Shanghai Xinrui he leaked bids submitted by competitors in tenders or directly appointed the company as a supplier for some activities, the judgement said.

Yu, who was born in 1983, worked in Bank of Communications branches in Changzhou city in Jiangsu province and in Dalian city in Liaoning province before moving to the bank’s headquarters in Shanghai. Yu was detained by local supervisory authorities in Shanghai in March 2019 just a few days after hosting a dinner for a number of bank employees followed by a visit to a clubhouse, people familiar with the matter told Caixin.

Yu’s case was described as “petty corruption” by the Central Commission for Discipline Inspection, the Communist Party’s anti-corruption body, according to a statement (link in Chinese) posted on its website in December. It said the case should act as a deterrent to others and be taken as a lesson by the bank.

It highlighted governance and political problems at the bank’s head office and said some departments formed secret networks of employees. There was also a network of improper relationships between superiors and subordinates. Yu’s case revealed problems including a lack of clarity and responsibility for the management of funds and a serious lack of supervision over centralized procurement in the trade union at the bank’s headquarters.