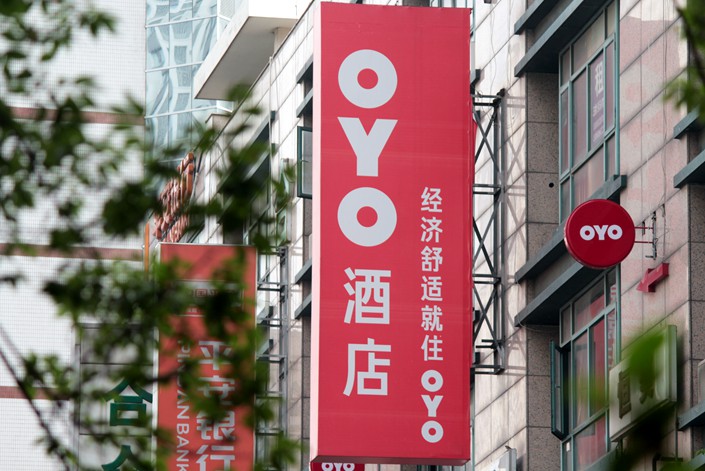 More than 20 laid-off OYO employees traveled to the company's Shanghai headquarters to demand back pay on March 9. Photo: IC Photo

More than 20 former employees of struggling Indian hotel platform Oyo descended on the startup’s China headquarters in Shanghai, demanding pay arrears they say they are owed amid mass layoffs.

The dispute revolves around performance bonuses that make up the majority of Oyo workers’ paychecks. One employee told Caixin that he was laid off on Dec. 31 and received his basic salary of 2,500 yuan ($359) for the month. However, he said the company failed to pay him a performance bonus, which ranges from 10,000 yuan to a potential 100,000 yuan. He said that he only received 40% of his bonus the previous month.

The former workers said they were personally owed amounts ranging from 10,000 yuan to 200,000 yuan, and that many of their former colleagues were owed smaller amounts.

The ex-employees, who traveled from around the country, held meetings with Oyo China’s representatives on Monday and Tuesday, Caixin has learned. Oyo has agreed to pay the employees’ performance bonuses on March 16.

But there are still questions over whether Oyo will honor the agreement. In a written response to Caixin, Oyo said employees’ performance bonuses are linked to the amount of “qualified and verified” hotels they have signed up to its platform and the company is currently “reviewing their past work performance.”

Founded in India in 2013, Oyo entered the Chinese market in late 2017. Using money from investors including its affluent backer Softbank Group Corp., Oyo rapidly signed up hotels by offering generous subsidies to both its partner hotels and customers.

However, Oyo’s reputation took a hit early last year when it was revealed that some of its employees allegedly falsified data to meet aggressive growth targets. Also, the firm has faced regular negative headlines as hotel owners have accused it of not providing the guaranteed payments it had promised them.

The ongoing coronavirus pandemic has added to Oyo’s woes in China, as it has upended the travel and accommodation industries. In an interview with Bloomberg early this month, founder and CEO Ritesh Agarwal said “it’s a tough time for our hotel partners.”

As its woes deepen, Oyo has been firing staff. The former employees in Shanghai told Caixin that the latest round of job cuts, which started in December and ended early this month, affected thousands of people.

Many of the layoffs were in the company’s emerging growth market (EGM) department. There were once 1,500 people in the EGM group on remote-working platform DingTalk, but there are now just 20, a regional manager in the EGM department said.

According to a Bloomberg report early this month, Oyo was laying off about 3,000 employees in China — one-third of its total headcount in the country.

The establishment of the EGM group in early 2019 was seen as key to Oyo’s expansion plans in China, its second-largest market after India. At that time, the company said it planned to double the number of hotels it was working with to 20,000 within seven months, several of the former Oyo employees in Shanghai said.

Also, in order to acquire market share, Oyo has continued to offer hotel stays for as little as 7 yuan for new customers, according to the sacked employees.

In its written response to Caixin, Oyo said it has stopped promising a guaranteed income to hotel owners and adopted an “earnings sharing model.”

For its 2019 fiscal year ending last March, Oyo recorded a net loss of $335 million, according to its latest earning report released earlier this year.