Reporter’s Notebook: Why Didn’t Any Americans Die From SARS? 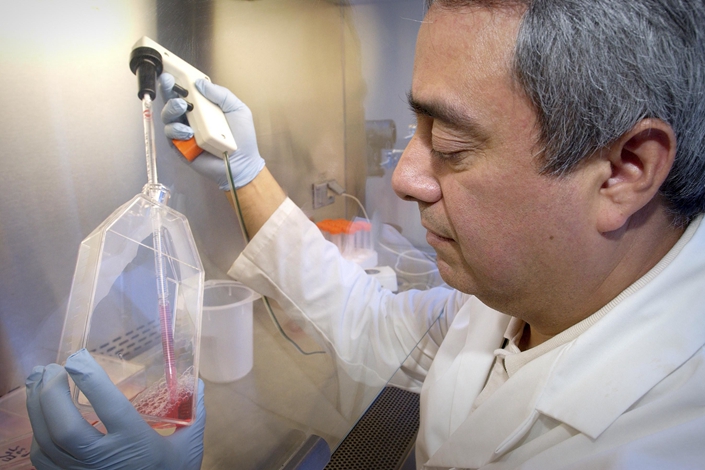 A researcher works with cell cultures at the U.S. Centers for Disease Control and Prevention during the SARS outbreak in 2002. Photo: IC Photo

The new coronavirus is spreading in the United States. As of Thursday, the country has reported 1,312 confirmed cases of Covid-19 infection and 38 deaths, according to Johns Hopkins University. By contrast, during the SARS crisis 17 years ago, the U.S. Centers for Disease Control and Prevention (CDC) reported 291 confirmed cases, while the World Health Organization (WHO) recorded 41 — but neither reported any deaths. Why?

Severe acute respiratory syndrome broke out in South China’s Guangdong province, with the first case reported in November 2002. In February 2003, the province had more than 100 confirmed cases. The disease later spread to 32 countries and regions. At that time, SARS was considered the most devastating infectious outbreak of the 20th century and the biggest event in modern public health history.

Undoubtedly, due to the tragic experiences that year, Beijing, Guangdong, Hong Kong and even Singapore remain highly vigilant when it comes to SARS. But why didn’t SARS spread to more than 100 countries and regions and infect more than 10,000 people that year? Why has the Covid-19 virus, also known as SARS-CoV-2, done this level of damage? Especially in the U.S., discounting for different characteristics of the two viruses, could it be due to a difference in prevention and control measures?

More observation and reflection may be needed to better answer this question. However, I can recall how the U.S. responded to the SARS outbreak in the early stages.

Some might remember that U.S. neighbor Canada was the first country outside Asia to suffer from an outbreak of SARS. It hit cities including Toronto and Vancouver.

According to the WHO, SARS appeared in Toronto on Feb. 23, and ended on July 2, which was about half a month later than in Beijing. The first case was an ethnic Chinese who went back to the city after a family visit to Hong Kong. Then the disease infected more than 150 people and killed more than 20 in a month.

But why didn’t the U.S. follow down Canada’s disastrous road? There are many reasons.

I interviewed Huang Jianshi, then director of the epidemiology section at the Tennessee Department of Health. He said, after taking into account Canada’s situation and the WHO’s world travel warnings issued on March 12, the U.S. quickly activated its Emergency Operations Center (EOC) on March 14 even though there had not been any cases reported in the country yet.

The center was meant to counter biological terrorist attacks. It cost $710 million to build and operated 24/7. Activation of the EOC enhanced real-time information exchange among U.S. government agencies, local health authorities and the WHO. The U.S. invested hundreds of billions to counter biological terrorist attacks after 9/11, which laid the foundation to respond to this kind of public health crisis.

Jianshi said that by March 15, a series of detailed and practical measures had been put in place, including alerting hospitals, briefing health officials at the state level, investigating transiting travelers who could be in contact with SARS patients, issuing Southeast Asia travel warnings, and providing guidelines to local health authorities for monitoring and identifying potential SARS patients. America also dispatched eight scientists to the WHO to analyze virus samples and the disease’s source, and published those analyses on the CDC’s website.

On April 4, then-President George W. Bush signed an executive order adding SARS to the list of communicable diseases for which a person can be quarantined by public health authorities.

At the state level, California reported several suspected cases. It began in Santa Clara on March 17 after the CDC alerted the nation about a potential SARS outbreak. California had already requested all hospitals to report any cases with symptoms of SARS infection. The state reported, in total, a combined 58 cases of confirmed and suspected infection. The severest of those had returned from Hong Kong and stayed in a hotel where an outbreak had occurred.

The city of Seattle in Washington also reported 14 suspected cases. Alonzo Plough, a public health expert was quoted by media as saying: “I think the United States, by adopting a very conservative case definition, allowed for early isolation of individuals and that played a role, certainly, in containment.”

“But we were lucky in that we did not have an individual who came with the kind of infection that characterized what happened in Toronto,” Plough said.

Plough’s “conservative case definition” could sound very aggressive to some. The state of New York, with a population of 19 million people, only reported 45 suspected cases. But its emergency response agencies demanded all suspected cases be quarantined for 10 days; and all close contacts of those cases would also need to be quarantined once there was an outbreak.

The New York government even activated contingency plans to counter a biological terrorist attack. It also used a computer system designed to detect epidemics and biological attacks, which connected with all hospital emergency rooms; once it detected a spike of cases with severe fever and respiratory difficulties, the system would quickly analyze and give its estimation. Even if the system sometimes made errors, it wasn’t ditched.

In retrospect, it’s also possible the U.S. was spared from the SARS outbreak simply by getting lucky. But the U.S. took actions very early and strictly controlled suspected cases, which was a key step.

I don’t know how people felt about the WHO’s global warning on March 12, 2003, or the CDC’s activation of the EOC on March 14. In China, Zhang Wenkang, then the health minister, showed up on China Central Television (CCTV) on April 2 and announced that there was a SARS outbreak in the country. On April 20, both Zhang and Beijing mayor Meng Xuenong were relieved of their duties for mishandling the outbreak. China had not been nationally mobilized for the fight against SARS until that day.

In May 2003, Huang Jianshi was invited back to China to help fight the disease. He told us that the U.S.’ massive investment into the public health network after 9/11 and anthrax crisis in 2001 played a vital role in defeating the disease.

He later moved back to China and took up the position as dean of the public health school at Union Medical College in Beijing. In 2011, he died at 58 of multiple myeloma. If he was alive today, what would he say about the new coronavirus and the U.S. response now?