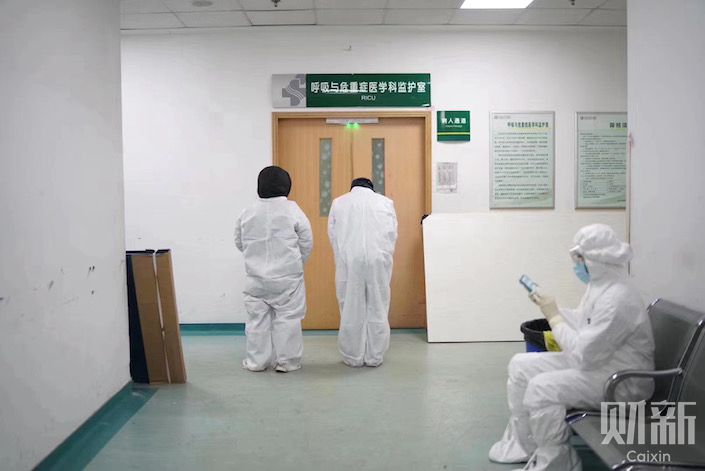 Li Wenliang's colleagues wait outside the ICU while he was in a critical condition. Photo: Ding Gang/Caixin

The hospital where coronavirus whistleblower Li Wenliang worked and died has been hit harder than any other by Covid-19 due in part to throttling of information by officials, a Caixin investigation has found.

The Central Hospital of Wuhan, where Li died, has seen over 230 of its 4,000 medical staff diagnosed with Covid-19, the highest rate of infection at any hospital in Wuhan, the epicenter of the outbreak, according to data Caixin has obtained.

On Monday, ophthalmologist Zhu Heping was the fourth doctor at the hospital to succumb to the disease, following the deaths of doctors Li Wenliang, Jiang Xueqing and Mei Zhongming on Feb. 7, Mar. 1 and Mar. 3, respectively. The hospital’s deputy chief cardiothoracic surgeon and deputy chief urologist remain in critical condition, the head nurse said.

A Central Hospital department head blamed authorities for endangering lives by spreading false information. “The false information released by the relevant departments — claiming the disease was controllable and would not spread from human-to-human — left hundreds of doctors and nurses in the dark, doing all they could to treat patients without knowing about the epidemic,” the department head told Caixin. “And even when they fell ill, they could not report it. They could not alert their colleagues and the public in time despite their sacrifice. This is the most painful loss and lesson.”

Doctors at the hospital discussed a handful of key factors behind their plight in a series of interviews with Caixin. First, as one of the closest hospitals to the South China Seafood Market believed to be a major source of infections, Central Hospital treated the most patients in the early stage of the outbreak, the doctors said. First-generation virus infections can be more deadly, they said, and Li and Mei could have been infected by the same patient.

Second, the hospital was overwhelmed by fever patients in early January. At that time, another hospital was designated to take in patients with coronavirus symptoms, but it only accepted those with contact history from the seafood market. The overflow went to other departments at the Central Hospital, where staff were not contagious disease specialists and could be easily infected, according to the doctors.

The doctors also blamed incompetent management. For years, the head of the hospital has only worked pushing papers, they said, far removed from frontline medical work. The hospital’s Communist Party chief, who was originally head of human resources at the city’s health authority, did not sufficiently understand infectious disease and even banned doctors from spreading critical public health information, the doctors said.

Finally, a Central Hospital internal document obtained by Caixin revealed interference from Wuhan’s municipal health authority made it difficult for the hospital to report cases. That interference was especially severe from Jan. 12 to Jan. 17, when the province held its annual “Two Sessions” legislative meetings.

Multiple doctors have confirmed the authenticity of the document, titled “Explanation of the Novel Coronavirus Treatment Situation,” while the hospital’s public relations and public health units declined to comment.

According to a 2007 policy published by the Ministry of Health, when medical staff cannot identify the cause of a pneumonia case, they must report it to their medical institution and “medical institutions should arrange an expert consultation within 12 hours.” If the expert cannot make a clear diagnosis, the case should be immediately reported as an “unknown pneumonia” by filing an infectious disease report to a national online system.

The Central Hospital of Wuhan document and Caixin investigation of other hospitals in the city show they were not able to diagnose their patients and file such reports as required.

According to the Central Hospital document, a law enforcement official surnamed Xu came to inspect the hospital on Jan. 12 and ordered that infection disease forms could only be filled out and reported after consultations from city- and provincial-level experts, complicating and delaying the time-sensitive process.

In response, the hospital called the district health authority to come collect samples and provide consultation, but was told it had to wait.

That wait lasted three days. On Jan. 16, as the “Two Sessions” was about to wrap up, the Wuhan city disease control center finally came to collect samples. By then, the hospital had 48 suspected cases. On Jan. 17, the Hubei provincial disease control center arrived to do the same. From Jan. 12 to Jan. 17, Wuhan’s health authority maintained that the city had no new infections. Only on the morning of Jan. 18 did the Wuhan health authority announce the city had four new cases of Covid-19.

Caixin previously reported that on Dec. 27, the Central Hospital of Wuhan sent swabs from a 41-year-old pneumonia patient who had no history of contact with the South China Seafood Market to a Beijing-based lab, CapitalBio Medlab Co. Ltd., for analysis.

CapitalBio’s test resulted in a false positive for SARS. It was a “small mistake,” a gene sequencing expert told Caixin, due perhaps to a limited gene database or a lack of retesting.

But it was this mistake that triggered concern by those who saw the report, recalling painful memories of the SARS cover-up 17 years before.

On Dec. 30, Ai Fen, head of the emergency department at the Central Hospital, shared the test report on WeChat with friends from medical school and medical staff at the hospital, warning them to beware.

The same evening, several doctors in Wuhan, including the late Li Wenliang, privately shared CapitalBio’s results — probably from Ai Fen’s messages — as a warning to friends and colleagues to take protective measures. Those messages then circulated widely online, sparking public uproar and demands for more information. Several people, including Li and two other doctors at the hospital who sent the messages that night, were later punished by authorities for “spreading rumors.”

Ai Fen was summoned by hospital supervisors on Jan. 2, and chastised for intensifying public panic and affecting the overall development of Wuhan.

The next day, Central Hospital asked every department to keep an eye on its staff and require them not to disclose “confidential information” to the public, according to a recording of the meeting obtained by Caixin. Workers at the hospital were told not to talk about the novel coronavirus, nor send text messages, photos or anything else that might leave a paper trail.