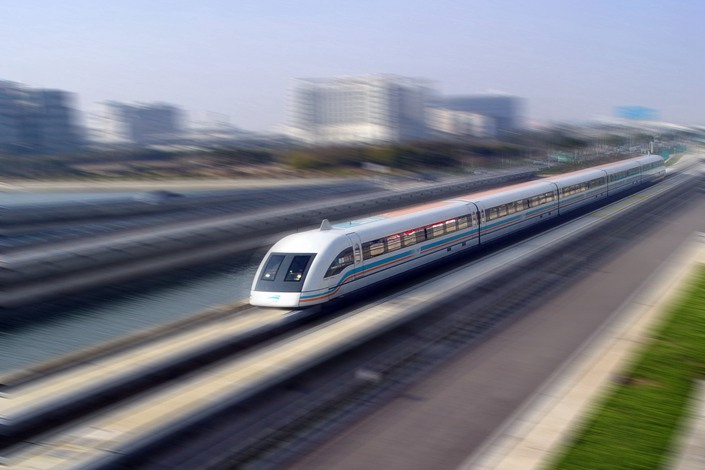 Maglev technology could cut down travel times. But there is a debate over whether the technology is safe and reliable, and whether the investment makes sense financially. Photo: IC Photo

China already has the world’s biggest high-speed rail network by far, spanning over 29,000 kilometers (18,000 miles). But plans are being hatched to make its trains even faster, with a magnetic levitation (maglev) railway with a top speed of 600 kph (372.8 mph).

The proposed line would connect two of China’s biggest cities, Guangzhou and Shenzhen, with the justification being that the existing high-speed rail link between the Guangdong province metropolises cannot now meet demand.

The proposed design, known as a Guangshen maglev, is touted as potentially being the second-fastest maglev train in the world and could cut the 30-minute journey between the cities in half.

This follows on from a 2017 plan issued by the country’s top economic planning body, the National Development and Reform Commission (NDRC), which outlined measures to boost China’s manufacturing, including the development of maglev technology in the coming years.

However, experts have argued that the country’s maglev technology remains immature and that China’s one operating high-speed maglev project is a financial black hole.

Despite these concerns however, the Shenzhen government in December gave the green light to a state-owned firm to conduct a preliminary study into the proposed Guangshen line, to look at its profitability and design. There are currently 12 such projects now at the planning stage around China, and three maglev lines already in operation in the country – though none of the existing lines are as long or as fast as the Guangshen line would be.

Maglev trains, which use one set of magnets to levitate a train and another to move it forwards and back, have the potential to be faster, quieter and smoother than conventional trains. Countries including the U.S, Russia, Germany and the U.K. have worked on the technology in recent decades. The world’s first commercial maglev line opened in 1984, linking the U.K.’s Birmingham International Airport with a nearby railway station, but closed 11 years later due to reliability problems. Currently, only China has a commercial high-speed maglev line, in Shanghai, and only three countries have any kind of operating commercial maglev system -- Japan, South Korea and China.

A key technical challenge is keeping the floating train the appropriate distance from the track. Extremely sensitive controllers are needed to quickly adjust the magnetic field if the train moves too far from, or too close to, the track. The time this device would have to detect the deviation on a maglev train moving at 600 kph and adjust the field would be around one-thousandth of a second. “It is quite risky to actually carry passengers on a huge maglev train as the time left for it to make an adjustment is really short,” said Shen Zhiyun, a locomotive expert and academician of both the Chinese Academy of Sciences and the Chinese Academy of Engineering.

China at present doesn’t have the technical ability to produce the kind of controller that would allow it to operate a commercial high-speed maglev train, Shen said.

Proponents of this plan point to Shanghai’s maglev train, which has operated over 100 trips a day for almost 15 years. China has accumulated lots of experience from this line, said Jia Limin, director of the National Key Laboratory of Rail Transit and Control and Safety at Beijing Jiaotong University. However that was a joint Sino-German project, and was not built with entirely homegrown technology — which is the goal of the NDRC plan.

The Shanghai maglev, which carries passengers between the city center and one of the city’s airports in eight minutes, runs more slowly than the proposed Shenzhen to Guangzhou route would — 300 kph. However the project has still proven to be a financial burden.

The line operator’s customer service department told Caixin that it carries an average of 10,000 people a day. With the ticket price set at 50 yuan ($7.30), that gives it an annual revenue of around $27.7 million. However, investment in the line amounted to $1.4 billion in the first few years of this century, half of which was borrowed from the Bank of China. A paper published by Shanghai’s Tongji University estimated that the interest on those borrowings alone amounts to $40 million a year.

Meanwhile, Beijing’s slower S1 maglev line, which snakes to the city’s suburbs at a relatively leisurely 80 kph, has encounter a difficulty with braking. In November, passengers reported that the train would frequently brake suddenly, sending passengers flying and nursing their bruises while the train remained stationary for at least a minute, according to reports from local newspaper the Beijing Daily.

Staff at the line’s operator, Beijing Maglev Transportation Development Co. Ltd., said that this braking was a normal response to a disruption in train-to-ground communication.

Other projects have failed to get off the ground at all. Plans for a maglev train connecting Shanghai with nearby Hangzhou, East China’s Zhejiang province, were dropped in 2010 after local residents protested over concerns about radiation and noise.

“What we should do now is conduct research and develop key technology, and wait till 2050 to put maglev into operation,” Shen said.