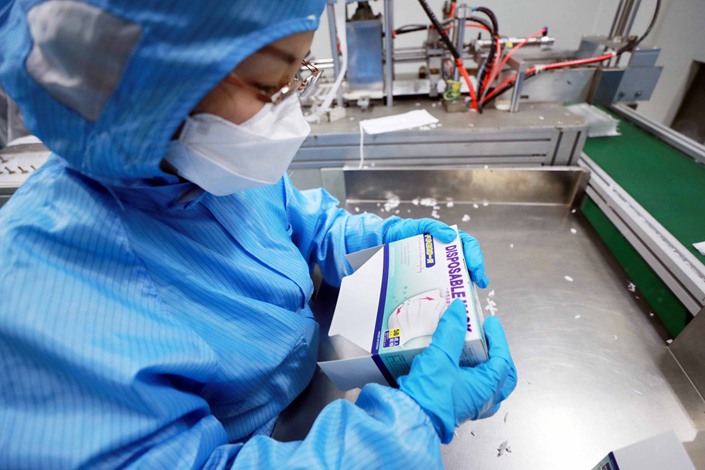 Workers package masks at a factory in Shanghai on March 8. Photo: IC Photo

Persistently high domestic demand for face masks is preventing Chinese manufacturers from responding to skyrocketing overseas orders as the deadly new coronavirus continues to spread around the world.

The shortfall is hindering global efforts to control the virus, which has so far infected more than 46,000 people in around 120 countries and territories outside China. Although the world’s most populous nation has now largely brought its outbreak under control, public health measures in many regions still require people to don face masks while outside in order to contain the airborne spread of disease.

Despite ramping up capacity, multiple mask-makers told Caixin they are unable to fulfill many large, urgent orders from regions including the United States, Europe, Japan and South Korea.

Under normal circumstances, China produces about half the world’s supply of face masks. But the country has rapidly scaled up production since the outbreak. By Feb. 29, it was churning out more than 100 million per day, including surgical masks and ultrafine N95 respirators, according to the National Development and Reform Commission, the country’s top economic planner. That’s five times more than its capacity at the start of the month.

However, that dramatic expansion still isn’t enough to sate growing appetite within China. The Chinese government has seemingly not yet substantially reduced orders of masks despite having largely resolved the severe shortages that plagued the country at the start of the outbreak.

“During the Lunar New Year, we were far from satisfying (the government’s demand for masks), but now we’re basically able to meet 70% to 80% of demand,” a representative of a mask manufacturer in the central province of Hubei said. “However, that means we’re supplying all our masks domestically and there’s still a shortfall.”

Mask-makers says they are bracing for another surge in domestic demand as China prepares for a full return to work and school. But that leaves them largely unable to respond to urgent — and lucrative — overseas buyers.

A manager surnamed Xu at a face mask manufacturer in South China’s Guangdong province told Caixin that the company had “recently received an exceptionally large number of purchase inquiries from abroad,” but had suspended overseas orders totaling some 10 million masks to meet demand in China.

That’s a source of frustration for mask-makers who say that overseas buyers are currently willing to pay three to five times the price of their domestic counterparts. “As long as we can get the orders to them, any price we set is up for discussion,” a representative of another manufacturer said.

Multiple producers of melt-blown nonwovens told Caixin that at the start of the Covid-19 epidemic, Chinese mask-makers cushioned the inadequate domestic supply of the material by importing it in large quantities from South Korea, Russia, the Middle East and Europe. Since the virus went global, that trend has reversed, with overseas manufacturers scrambling to secure their own supplies.

“Pretty much the whole world has demand for face masks and filtration material right now,” a representative of a large Tianjin-based filter-maker told Caixin, adding that South Korea, Hong Kong, Singapore, Malaysia, India, and Iran were hungriest for the products.

But like mask manufacturers, Chinese makers of melt-blown nonwovens must focus on securing the domestic supply before shipping overseas. Caixin has learned that the Chinese government has designated some manufacturers as “key disease-control work units,” allowing their products to be requisitioned when needed even if that means suspending established sales channels.

Even when those channels remain open, capacity shortfalls mean that many companies that make melt-blown nonwovens can’t take on overseas orders. A spokesperson for another Guangdong-based factory with a daily production capacity of 1 ton told Caixin that they started receiving inquiries from European and Southeast Asian mask-makers at the end of February, “but with the domestic supply so tight, we didn’t take them on.”

“Right now we’re taking about 10 calls per day from South Korea inquiring about purchases, but we can’t spare them even a kilogram,” said a staff member at another factory in the eastern city of Nantong.

A lack of the specialist equipment needed to make melt-blown nonwovens means that the supply of China-made face masks is likely to remain tight in the short term.

Regular surgical masks usually include a square of melt-blown nonwoven material weighing around 1 gram. N95 masks, so called because they filter out 95% of airborne particulates, use 3 to 4 grams.

Because melt blowing requires specialist equipment and doesn’t have a wide range of uses, it is a comparatively niche part of China’s industrial textiles sector. In 2018, China produced just 53,500 tons of the material, equivalent to a real output of around 147 tons per day, according to the China Nonwovens & Industrial Textiles Association.

That’s about one-eighteenth of the quantity of spunlaid nonwovens — the type of fibers that form the outer layers of face masks — produced in China during the same period. And not all melt-blown nonwovens meet the standards for use in face masks.

Extraordinary efforts to expand specialist textile production amid the epidemic show how far supply lags behind demand. Existing factories have expanded production, while other firms have pivoted to manufacturing the masks despite having little or no background in the sector. However, an inability to simultaneously produce more of the complex melt-blowing machinery has led to major manufacturing bottlenecks.

To plug the gap, Chinese firms are refitting existing dual-purpose spunlaid and melt-blowing equipment as well as repurposing machines that make similar products like soundproof wadding for cars and liquid filtration material.

The government has also vowed to investigate companies that engage in price gouging or other illicit behavior. Industry insiders told Caixin that while the measure will have an effect, in time the expansion of production chains will dramatically drive down the cost of melt-blown nonwovens.

Not that mask manufacturers can afford to wait. As one Guangdong-based producer told Caixin, as long as there are raw materials, “I won’t haggle over the price. Just give them to me or I’ll have to suspend production.”