By Zhang Lantai and Timmy Shen 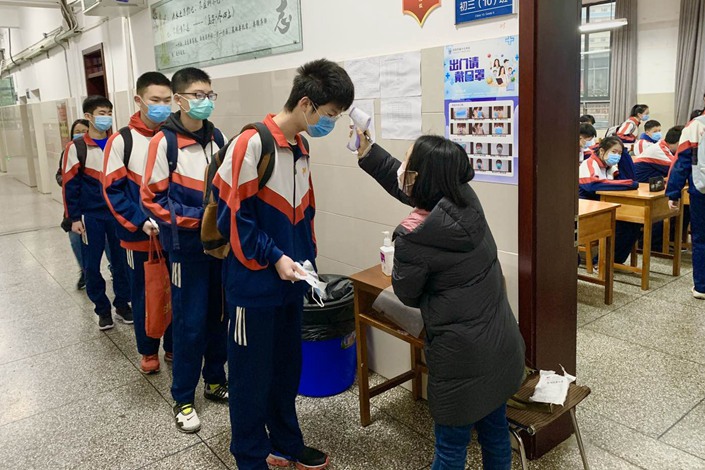 China continues to bring its domestic outbreak of the novel coronavirus under control, with the majority of new cases now being among those who have traveled from overseas and nearly half of all regions reporting everyone with Covid-19 in the jurisdiction has recovered.

On Sunday, the Chinese mainland reported 16 new infections, four of which were in Central China’s Hubei province, where the pandemic began, according to the latest data (link in Chinese) from China’s top health body.

All of the other 12 were among people who had traveled to China from overseas, marking the fourth day in a row in which all confirmed new infections on the mainland, excluding Hubei, were imported from overseas.

Over a third of China’s provincial-level regions have cleared their Covid-19 caseloads. So far, the provinces of Qinghai, Fujian, Anhui, Jiangxi, Shanxi, Hunan, Yunnan and Jiangsu, as well as Chongqing and Tianjin municipalities, and the Tibet and Xinjiang Uygur autonomous regions have reported all their coronavirus cases have recovered. The provinces of Gansu and Henan have also cleared their domestic infections and only have imported cases under treatment in hospital.

Meanwhile, the total number of confirmed cases outside China has reached over 88,000, surpassing China’s 81,000, according to data from Johns Hopkins University.

On Monday, China’s top court, top procuratorate, Ministry of Public Security, Ministry of Justice and customs authorities jointly issued guidelines (link in Chinese) that said people traveling to the country would face punishment if they are found to have lied about having Covid-19 symptoms or interfere with tests for the virus and its symptoms.

Even as the number of coronavirus cases in China drops, concerns over the living conditions of people still under lockdown have emerged. On Sunday, Wuhan’s Huangpi district government said (link in Chinese) that the head of the district’s mortuary services office had been removed from his post after a mortuary services vehicle was used by a contractor to transport daily necessities to the contractor’s relatives, which “caused negative impact on the society.”

Earlier this week, a residential management committee in the city’s Qingshan used a garbage truck (link in Chinese) to deliver meat to residents, sparking outrage in the community and online.

“It’s so dirty to use a garbage truck to carry meat, even after it’s sanitized,” a resident told Caixin. “It’s a complete violation of food safety regulations.” The deputy head of the district has been put under investigation, according to an official notice (link in Chinese) on Thursday.

Tang Ziyi and Guo Yingzhe contributed to this report.