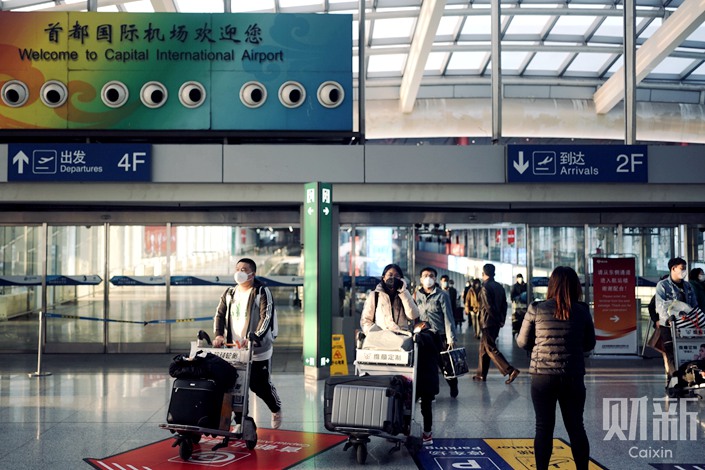 Beijing has ramped up its quarantine measures for overseas arrivals for the second time in less than a week in what could become a major deterrent for overseas Chinese attempting to flee a worsening pandemic abroad.

Starting Monday, all international arrivals in Beijing have to be transferred from Beijing’s Capital International Airport to government-designated quarantine centers where they will be isolated for 14 days, the municipal authorities announced Sunday evening. Travelers will have to cover their own lodging and food expenses while quarantined.

Special cases that pass “strict assessment” may be allowed to be monitored at home, authorities said. At a Monday press conference, Beijing authorities clarified that those above the age of 70, minors, pregnant women and others with underlying conditions who are “unsuitable for concentrated quarantine,” as well as those who live on their own, can apply with their residential compound to be quarantined at home.

In order to apply, one must contact the residential compound prior to entering China to see if they have the resources to accommodate home monitoring, city officials said. Once at home, individuals must comply with health checks and declarations and violators will be sent to quarantine centers. Rule breakers will also be investigated, bear “legal responsibility,” and be recorded in China’s social credit system, the rules said.

Quarantine locations or “concentrated monitoring stations” are government-designated hotels staffed by medical personnel. Those isolated in these locations receive regular checkups, and any problems will be “promptly dealt with,” according to authorities.

Multiple sources have told Caixin that staying at a quarantine center can cost from about 500 yuan ($71.40) to 600 yuan a day.

The measure is the latest step to intensify border controls as the Covid-19 epidemic worsens outside of China’s borders. As of Monday morning, at least 13 countries outside China reported more than 1,000 infections, while overseas deaths resulting from the coronavirus has grown to exceed 3,200.

In February, at the height of China’s domestic outbreak, Beijing exempted certain foreign arrivals from quarantine, reflecting the few cases that were reported abroad at the time.

In recent weeks, China’s new infections began to dwindle, replaced by dozens of imported cases as overseas outbreaks worsened. In response, Beijing's municipal government first began to require isolation from those arriving from countries with “severe outbreaks,” including South Korea, Italy, Iran and Japan. Then on Wednesday, it announced that all who arrive from abroad, regardless of citizenship or country of origin, will be subject to 14 days of medical isolation, though quarantine at home was the default.

“We are implementing the greatest controls on sources of infection, and cutting off transmission routes,” authorities said.

The announcement comes amid reports that overseas Chinese, fleeing worsening epidemics in countries such as Australia and the U.S. are looking to fly to China. Some universities in the U.S. have also given eviction notices to students in dormitories, asking them to leave within days of the notice.