Editorial: Coronavirus Is a Global Problem That Requires Global Cooperation 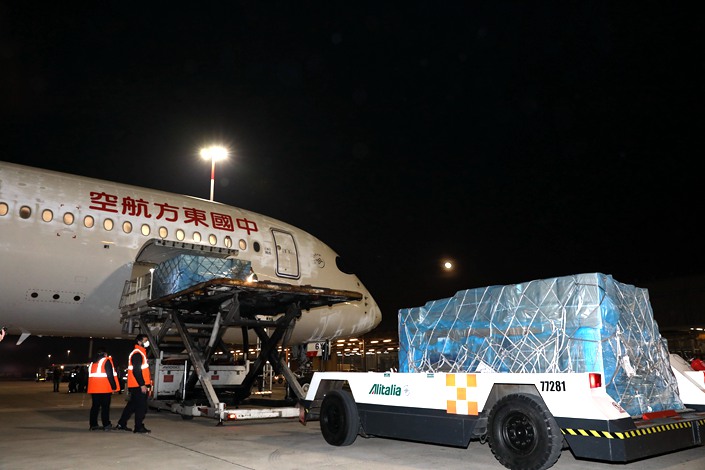 The new coronavirus is spreading rapidly across the world and has already been defined as a “global pandemic.” Although the international community has responded with a certain level of cooperation, efforts still fall far short of what is needed to contain the disease. Countries are basically fighting alone, while China and the United States needlessly sling mud at each other.

Instead, we should be coming together to fight this common threat. We urgently need to strengthen cooperation and coordination, and in this the World Health Organization (WHO) must play the leadership role it was built for.

The virus, which causes a pneumonia-like disease called Covid-19 and has so far killed more than 6,500 people worldwide, quickly burst through national borders. There has been no lack of moral support, information sharing, and scientific cooperation between countries. Even more enthusiastic has been the assistance from the people of other countries: For example, many Chinese were moved by the poetry printed on aid supplies sent over from Japan.

However, the epidemic has also revealed the shortcomings of the global governance system for public health. To start with, countries have not yet reached a consensus on the extent of the threat posed by the pandemic. A number of nations have been caught off-guard and have not adequately heeded the WHO’s warnings and suggested countermeasures. Instead, they have allowed themselves to believe the threat is confined to China or Asia and won’t arrive on their shores, with the result that they lack testing capacity, labor resources and medical supplies.

Even worse, many countries have tacitly turned the virus into a political issue. In order to reduce the impact of the epidemic on the U.S. presidential election campaign, some have downplayed the pandemic as a mere flulike illness, while others have tried to use the virus to accrue more power. Meanwhile, the international community still lacks unified diagnostic criteria.

This situation is frustrating. In 2008, countries came together to tackle the global financial crisis. It was difficult to predict then the turn away from globalization, and the rise of protectionism, unilateralism and populism. The chaotic picture that emerges today from the international response to the outbreak is, in essence, the bitter fruit of the international community’s misguided belief in “decoupling.”

Epidemics don’t respect borders. Compared to known infectious diseases like SARS, H1N1, and MERS, Covid-19 represents a bigger challenge for humanity. The threats it poses are more severe and wider-reaching, and we know less about it.

Viruses aren’t political. Pointless squabbling will only lead humanity toward an even bigger disaster. The international community will need to join hands — figuratively speaking, of course — and lay aside their prejudices, even if just for a little while. Crucially, global superpowers must lead by example. This pandemic concerns us all, and helping others is the same as helping yourself.

As a specialist agency under the U.N. and the largest intergovernmental health organization, the WHO is the main global coordinator in the field of public health and has implemented a number of policies during the pandemic. However, compared to the 2002-03 SARS outbreak, the WHO’s role, even internally, has come in for no shortage of criticism.

During the initial stages of the current outbreak, the WHO clearly underestimated the threat of the virus, and hesitated in labeling the pathogen a “public health emergency of international concern” and a “global pandemic.” The organization as well as countries around the world must figure out how the WHO can strengthen its specialization, independence and leadership in the future in order to play a stronger role in public health cooperation.

It must be admitted that the kind of human shortcomings that cause us to act complacently and muddle through during times of crisis have occurred everywhere. People need time to come to terms with the emergence of sudden threats like epidemics.

However, now that the virus has spread this widely, we mustn’t allow this to conceal the problems in the way we’ve coped with the issue. A country’s capacity to govern itself, its level of economic and technological development, its health systems, its educational level, and the abilities and responsibility of its officials will all visibly influence how well it controls an epidemic.

At present, the virus has predominantly afflicted wealthy countries and regions in the global north. If their inability or unwillingness to quickly respond to the virus causes it to spread widely across the global south — for example, in underdeveloped countries in Africa — the consequences could be unimaginably dire. The international community must take control of the outbreak before the window of opportunity closes.

China has won praise from the international community for displaying a relatively high degree of transparency toward the outside world during its handling of the outbreak. In doing so, it has projected the image of a responsible superpower. After China has effectively controlled the epidemic at home and as the risk to other countries rises by the day, the East Asian giant should continue to offer a helping hand to nations experiencing severe outbreaks, promote global coordination and cooperation in response to the virus, and show kindness and leadership to the international community.

Recently, China has sent aid to Italy and Iran. It has also announced five major policies to assist with the global fight against the epidemic, including strengthening communication and coordination with the WHO and the international community; dispatching teams of medical experts to countries and regions in need; and supplying medicines and medical supplies to the international community. These measures are not only completely necessary, but also involve sharing China’s experiences and lessons from the epidemic with its international partners, something that is even more effective than material aid.

In August 2017, the WHO’s representative office in China held a dialogue on whether or not the world was ready for the next global pandemic. It turns out that neither China nor the rest of the world had made adequate preparations for it. In an era of economic globalization, there will never be an end to fast-moving public emergencies. But with the right preparation, we can mitigate the potential consequences.

This pandemic is still developing, and we can’t yet systematically analyze the pros and cons of the global response. But we can be sure that only when we pull together and work to improve global health systems will we get closer to declaring victory in the fight against the virus.