Fisher: What Western Pundits Miss About China and The Coronavirus 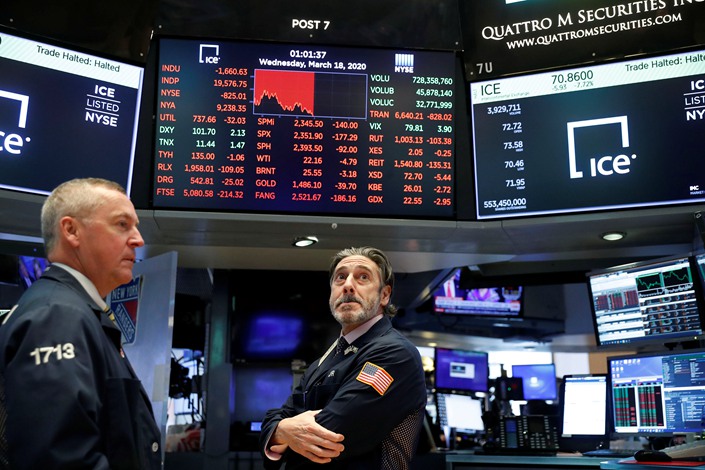 Traders look on after trading was halted on the floor of the New York Stock Exchange (NYSE) on March 18. Photo: VCG

Western pundits fail to see that the coronavirus isn’t a unique danger to the global economy and capital markets. What they miss is what you already know: In China, the virus’s epicenter, life is already starting to return to normal and local markets are surging. While global stocks have sunk -15.3% since February 3, the CSI 300 is up 8.4%. China’s recovery from the coronavirus interruption shows you how the world moves forward. Here’s what western pundits would see if they could get over their fears.

China’s coronavirus experience is a perfect example of what happens to markets when a crisis hits. First, uncertainty spikes and fears rise. Usually, people see the cause as something unprecedented and new — dismissing history in the process. “This time it’s different,” many shriek, and markets sink — just as happened when the coronavirus surfaced in Wuhan. But as legendary British investor Sir John Templeton said, “this time it’s different” is the most dangerous phrase in investing. Every crisis has different specific features, of course. But the way markets and economies react to them is mostly the same. After the initial panic, investors realize economic disruptions will pass quickly. Consumers and businesses will unleash pent-up demand. Factories will resume production. Markets rise — even before the situation on the ground may seem to have improved much. They pre-price economic recovery before it materializes.

History is filled with examples of this. In my last column, I noted how markets snapped back after past health scares, like 2003’s Severe Acute Respiratory Syndrome (SARS) outbreak. It was the same for other global health scares — from the 1957 and 1968 influenza outbreaks to 2013’s MERS. But this trend holds for any type of “this time it’s different” crisis — pandemics, financial scares, natural disasters, wars and terrorist attacks.

Take the 2008-2009 global financial crisis. From the high of October 31, 2007 through the low of March 9, 2009, world stocks fell by 61.9%. Most of that came late. In the period between Lehman Brothers’ September 2008 collapse and the absolute stock market bottom, world stocks fell -45.5%. Pundits were certain we had entered a “new normal” of slow growth and weak stock returns. Yet in the 11 years since the low, stocks are up 254%. It turned out the “new normal” looked a lot like the old normal.

Similarly, while investors now fear a viral contagion spreading from Asia across the globe, in 1997 they feared the Asian currency contagion’s global spread. Markets fell during the middle of that year as Thailand, Malaysia, Singapore, the Philippines, South Korea and Indonesia all dealt with currency crises. Fears spiked — and passed. World stocks ended 1997 up 14.7%. The following year, they surged 22.0%.

But every time a new crisis hits, Western pundits seem to forget Templeton’s “this time it’s different” lesson. They’re doing it again with the coronavirus. The illness has impacted the US at nowhere near the same levels it has impacted China. But the disease is spreading, and worst-case fears abound. It’s a new virus, so imaginations run wild with where things could go. People watch old horror movies about disease outbreaks and mistake fiction for fact-driven prophecy.

The competitive Western media landscape makes things worse — negative stories sell, so media outlets try to one-up each other with greater tales of doom and gloom. Commentators obsess over what could happen rather than what is likely to happen and portray what could happen as what is likely. They speculate that the global travel industry won’t recover for years. They say the virus could start a domino effect that will crush the global economy. Now they fret that the tumble in oil prices compounds the crisis and will lead to a cascade of energy sector bankruptcies — particularly among US shale drillers — and from those bankruptcies, the subsequent bankruptcies of related banks. Listen to these pundits enough, and you start to envision the future as an apocalyptic film, with the few survivors roaming a desolate wasteland.

This panic blinds Westerners from seeing a real-time example of how the coronavirus eventually plays out: China. You don’t need me to tell you the virus’s spread has slowed dramatically. And you may already see signs that the Middle Kingdom’s economy is quickly reviving. By the end of February, more than 90% of shipbuilders were back online in Zhejiang. As of March 3, China’s top 16 automakers had resumed operations at 84% of plants. The travel industry is rebounding — fast. Hotel bookings were up 40% in the week ending March 1. Domestic flight reservations for June soared 250% in the last week of February compared to the previous week, according to Tongcheng-Elong Holdings Ltd. Western pundits could even see this from one less-than-desirable byproduct: air pollution returning to Hubei province as factories and utilities ramp up output. But where I’m sitting, few see this rebound. Instead, they speculate about how the virus could decimate the US and Europe for the long haul — even though China is bouncing back swiftly.

Sure, short-term trouble remains. But businesses and the government have mitigated the damage with creative workarounds. Take coronavirus bonds. A small portion of the proceeds from their issuance goes to virus mitigation efforts, but most goes to companies who need financing to survive the slowdown. State-owned banks have been scooping them up, often at relatively low yields. While pundits warned that small businesses couldn’t survive the pullback, the bonds are helping them refinance their debt and weather the temporary storm.

Similar innovation will happen in the US and Europe — and is already under discussion. Businesses will push forward and find ways to make profits. Economies will rebound. Markets will rise in anticipation of the recovery, at a time when most fear the worst. Then, too, Western countries have the luxury of learning from China’s experience. They can build on tactical responses the government has employed. All of it points toward a recovery few Westerners can fathom right now. As the world joins the China-led recovery, and even before then, relief will send stocks soaring globally. Templeton’s words will ring true once again: This time isn’t all that different.

Ken Fisher is the founder and executive chairman of Fisher Investments, a money management firm.