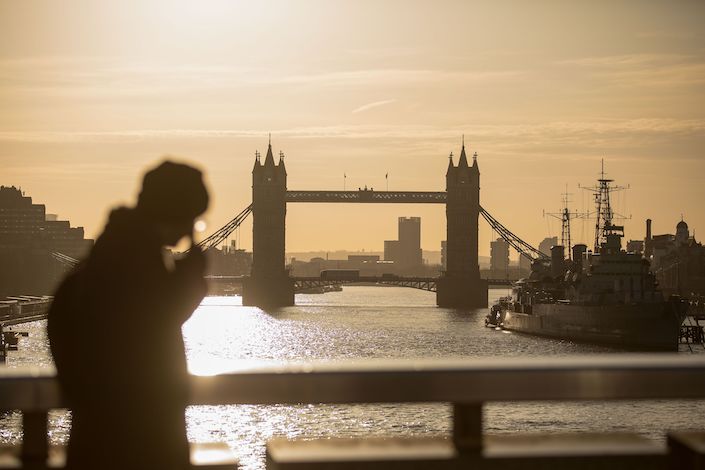 A commuters walk across London Bridge in view of Tower Bridge in London. Photo: Bloomberg

Thousands of Chinese students are stuck in the U.K. as schools close and some host families refuse to provide boarding because of the coronavirus pandemic.

The U.K. government said Wednesday that all schools in the country would close starting Friday, meaning about 15,000 Chinese students in middle to high schools no longer can stay on campuses. Many of them said they couldn’t get airline tickets home.

More than 160 parents of underage students studying in the U.K. wrote to the Chinese Foreign Ministry and China’s Embassy in the U.K., pleading for consular protection of their children amid the Covid-19 outbreak.

In the letter, some parents said the earliest they could get flight tickets is April, and some airlines canceled the unaccompanied minor service for children under the age of 11, making those who already booked tickets unable to board by themselves.

Theses minor students usually live in dormitories when schools are open and either fly home or stay with host families during breaks. Most host families are run by retirees, who are susceptible to the virus. Many such host families have explicitly refused to accept Chinese students, according to some parents.

U.K. schools usually have two to three weeks of Easter break starting in late March. Many Chinese students had planned to fly home during the break, but as China was hit hard by the outbreak in February, some schools at the time suggested Chinese students not return. Some students canceled their tickets.

While China seems to have contained the outbreak in March, new cases in Europe have been increasing rapidly. The U.K. had 2,626 confirmed cases as of Wednesday, up 676 from Tuesday. The death toll stood at 104, adding 32 in just one day.

The U.K. so far hasn’t announced airport closures or city lockdowns, but as the outbreak evolves some parents are worried that their kids would be stranded if the country does take such steps.

Some parents told Caixin that they wish the Chinese government could arrange charter flights to bring the students back. Many students have to transfer flights through Russia, Thailand, Singapore or Hong Kong, which would increase their chances of being infected, some parents said.

In an interview with state-run CCTV, Chinese Ambassador to the U.K. Liu Xiaoming said he totally understood the parents’ concerns.

“There are fewer flights now, and we are working actively with domestic authorities to see if we can add temporary commercial flights or charter flights,” he said.

Chen Yifan and Deng Mushen contributed to this report.