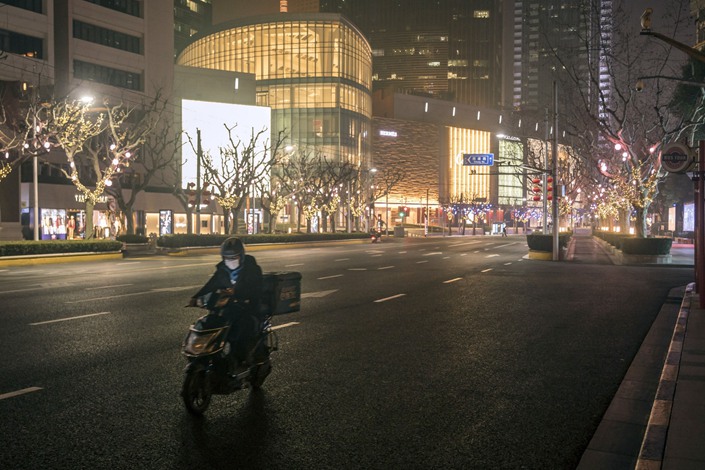 A deliveryman wearing a protective mask rides a motorcycle along Nanjing Road in Shanghai on Feb. 12 Photographer: Qilai Shen/Bloomberg

(Bloomberg) — Chinese companies had their worst quarter on record, with every individual sector reporting worse results in the first three months of this year, according to the China Beige Book, a quarterly survey of firms.

There was widespread decline in sales, especially in the retail sector, and a simultaneous collapse in revenue and profits, according to the report, which is published by CBB International and modeled on the survey compiled by the Federal Reserve on the U.S. economy.

Economic activity collapsed in China in February as the government shut down the nation to try and stop the spread of viral pneumonia. That outbreak is now sweeping the world, with others following in China’s steps in banning movement and work in an attempt to slow the spread of death and illness.

“A 10%-11% GDP contraction is not unreasonable” this quarter, according to the report, with any recovery dependent not just on domestic resilience, but also factors beyond the government’s control, according to the report. “China may also have to admit to poor Q2 numbers on global weakness. Investors may therefore be severely overestimating the extent of China’s recovery and hence the extent to which China can cushion a global downturn.”

There’s no reason to think the household is any better off, the report said, with a contraction in employment across every sector. The quarterly report is based on data and interviews with more than 3,300 firms between February 13 and March 12.

Economists have repeatedly cut their forecasts for China’s growth, and now see a deep contraction this quarter and the slowest expansion this year since 1976. Even so, policy makers have expressed confidence that things in China are getting back on track and will improve in the April-June period. China is due to release first-quarter gross domestic product in mid April.

Any pickup will be welcome to companies and employees across China. The report showed the index for the workforce started contracting in the first quarter, for the first time since early 2016. If that continues it will place additional pressure on the government to act to stimulate the economy, with the official unemployment rate already at a record-high 6.2% in February.

If the situation doesn’t show a solid reversal in the second quarter, Beijing will probably have to contemplate “much more expensive intervention,” the report said.