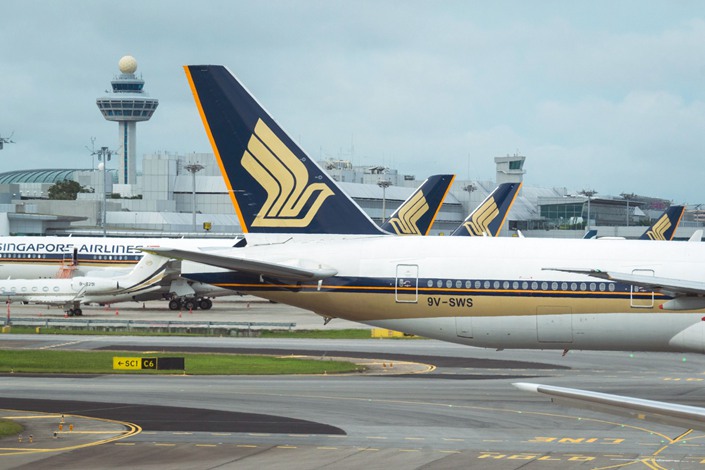 (Bloomberg) — Singapore Airlines Ltd. shares fell after the carrier unveiled a plan to raise about S$8.8 billion ($6.2 billion) to contend with the devastating impact of the coronavirus pandemic.

The company will issue S$5.3 billion in new stock at S$3 apiece, 54% lower than the last closing price on Wednesday, as well as convertible bonds, according to a statement Friday. State investor Temasek Holdings Pte., the carrier’s biggest shareholder, said it would back the resolutions.

“The board is confident that this package of new funding will ensure that SIA is equipped with the resources to overcome the current challenges,” Chairman Peter Seah said in a statement. “We are especially grateful for Temasek’s strong vote of confidence.”

The coronavirus has plunged global aviation into an unprecedented crisis. Airlines could require as much as $200 billion in government aid and bailout measures this year to survive, according to the International Air Transport Association, while CAPA Centre of Aviation has warned the pandemic will bankrupt most carriers by the end of May if they don’t get support.

Shares of Singapore Airlines initially slid as much as 10% Friday morning before paring the loss to 3.5% as of 10:57 a.m. in Singapore. Trading in the shares was halted Thursday pending the announcement.

The carrier will seek approval from shareholders for the share sale. It will also raise S$9.7 billion in 10-year mandatory convertible bonds, with as much as S$3.5 billion initially issued as 295 rights convertible for every 100 shares. The company arranged an S$4 billion bridge loan with DBS Bank Ltd. to support near-term cash requirements.

“SIA has been seeing strong growth before the hit from the pandemic. It has also committed to fleet renewal,” Dilhan Pillay Sandrasegara, chief executive officer of Temasek International, said in the statement. “This transaction will not only tide SIA over a short term financial liquidity challenge, but will position it for growth beyond the pandemic.”

Asia’s second-biggest international carrier had already said it would cut scheduled capacity through April, defer aircraft deliveries, offer unpaid leave for employees and cut salaries, including for CEO Goh Choon Phong, who is taking a 30% pay reduction from April.

Temasek is expected to act as a lifeline for many companies in its portfolio. Domestic businesses have traditionally represented more than a quarter of its investments and its 12 biggest shareholdings by value plunged by almost $24 billion between January 1 and March 20. The investor, which had S$44.2 billion in cash, cash equivalents and short-term investments as of March 31, 2019, has begun re-evaluating new deals so it can prepare to pump funds into existing assets instead.

Singapore Airlines said Monday it was in talks with financial institutions on funding and has drawn on credit lines to meet immediate cash-flow requirements, while continuing to explore measures to shore up liquidity. Singapore announced measures in February to help ease operating costs for airlines, including rebates on aircraft parking and landing fees.

Airlines have been trying to secure funding and government aid in an increasingly desperate attempt to survive the coronavirus crisis, which has infected more than half a million people and killed about 24,000.