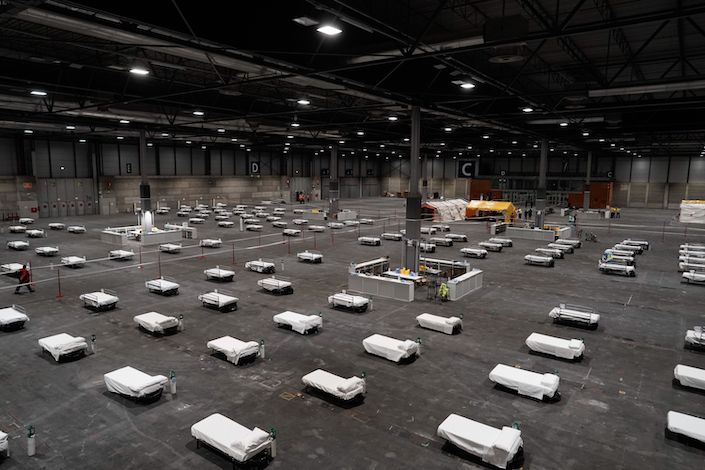 A makeshift hospital set up at Ifema exhibition complex in Madrid, Spain, with 5,500 beds. Photo: Bloomberg

As the coronavirus pandemic still seems to be out of control in Europe, there is little chance that the outbreak will end by this summer, according to Zhang Wenhong, head of Shanghai’s Covid-19 clinical expert team.

Zhang, who is also director of the infectious diseases department at Huashan Hospital of Fudan University in Shanghai, predicted earlier that the epidemic within China would end in April and the global spread in June.

Now, he said in an interview with People’s Daily Online, the pandemic may continue into next year, especially as some European countries consider following a “herd immunity” strategy ― allowing enough people to get infected and become immune that it’s more difficult for the disease to spread to susceptible individuals. Such an approach would make for a very lengthy and painful process, Zhang said.

For the public, prevention and control is still the key, Zhang said.

“No contact, no infection,” he said. “Effective personal protection includes keeping a social distance, washing hands frequently and wearing a mask. If you can do all three, the chance of infection will be very small.”

Here’s a transcript from the interview:

Is the virus spreading in Italy different from the one in China? Which one is stronger?

Zhang: Currently there is no clear data on the sequence analysis of the virus in Italy, so it is too early to say which one is more virulent. The fatality rate in Wuhan in the early stage was also high. Now the rate has come down. We haven’t heard about any changes in the virus component. Changes in viral components must be supported by the results of genomic sequencing.

Let’s go through the timeline. The first three cases in Italy were all imported. For the next two weeks, no new cases were reported. While the whole country felt relief, the outbreak was brewing. On Feb. 22, a 38-year-old Italian male from the Lombardy region was confirmed with infection, becoming the fourth confirmed case. The patient, who had not been to China recently, had dinner in late January with a friend who had returned to Italy from Shanghai, but the friend tested negative for the virus.

More than 70 cases that were later confirmed were related to the fourth case. This is an internal circulation around a "super spreader," which caused the spread in many communities in Italy. Because Italians didn’t like to wear masks or be quarantined, and community activities were more active, the virus spread from a few dozen people to a few hundred before it grew exponentially.

How scary is exponential growth? For example, if you had a large enough sheet of paper, every time you fold it, its thickness doubles. If you can fold it 46 times, it would be as thick as the distance from the earth to the moon. It is scary. The number of cases in Italy could reach a very high level in April and May. This is a test of Italy’s ability to take effective preventive measures.

Should overseas Chinese come back to China?

Zhang: It depends on whether they decide never to go back after they come to China. If the pandemic lasts another six months, should they continue their study or work? If they don’t come back, they must protect themselves. Don’t get sick is the best way. Effective personal protection includes keeping a social distance, washing hands frequently and wearing a mask. If you can do all three, the chance of infection will be very small.

Will the virus stay?

Zhang: Historically, many infectious disease outbreaks lasted more than one season or even one year. The 2009 H1N1 pandemic lasted into the next year. At present, the outbreaks in Singapore and India are not serious, which makes some believe the virus is less likely to survive in hot weather. But Malaysia has more than 400 cases, which means it’s not just the weather. However, the low fatality rates in these countries at least indicate that it is possible the number of severe cases will reduce in hot weather, but there are still some mild cases. Otherwise, Malaysia, a country in such a low latitude, shouldn’t have so many confirmed cases. The virus may be easily contained in summer. But now the outbreak is exploding in Europe, and some countries may not test mild or asymptomatic patients, which means these people can continue to spread the virus. Therefore, the outbreak will continue. It is possible that it won’t end in the summer and may come back in the winter.

When can schools reopen?

Zhang: Resumption of work and school is a huge issue. To be honest, I find this question very difficult to answer, because too many factors are involved. Experts and the governments need to work together on a conclusion. For medical workers as well as staff currently working in various aspects of preventing imported cases, such as customs, community grid workers, we must ensure minimizing the inbound risk.

School reopening should depend on the epidemic situation in each province. If there are no new cases for a while, schools can reopen. But the immediate problem is that megacities such as Shanghai and Beijing continue to have imported cases from abroad. This requires case-by-case analysis to see if the imported outbreak is under control. And now most parts of the country have returned to work. Generally, businesses first resume operation, and then schools reopen. If there is any problem in resumed businesses, schools should stay closed. Because once there is any infection in schools, it will affect a whole class or even a whole school, which may cause panic. Businesses are relatively better because the impact won’t be so large-scale.

Which is more effective, traditional Chinese medicine or Western medicine?

How is the vaccine development going?

Zhang: Fast progress has been made on all fronts of vaccine development in China. Some preliminary results have been achieved. However, it requires a very strict process for the vaccine from being effective in animal experiments, to extraction of antibodies, clinical trials on humans, and then to be applied on humans. Because vaccines are used in humans, they have to be safe. At the best, it will take at least a year or so. By then there will be no more cases in China. Who can participate in the clinical trials? If the vaccine is developed in China but the clinical trials have to be done abroad, can they recruit patients? These are all issues. That’s why we say vaccines are for the future, because no one knows if there will be another outbreak.