Trump Warns of Pain Ahead; Aides Air Estimate of 240,000 Deaths 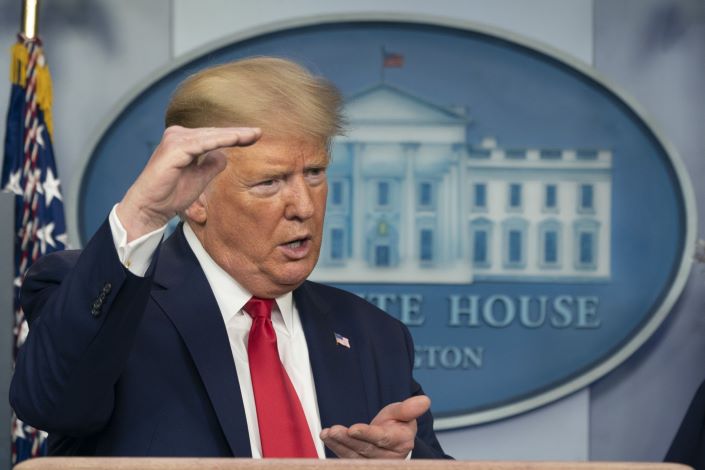 (Bloomberg) — Faced with staggering projections that as many as 240,000 Americans will die from coronavirus, President Donald Trump largely abandoned his optimistic tone on Tuesday, telling the U.S. to brace for one of its toughest stretches as a nation.

His critics had said for weeks that Trump had been too blithe in his approach to the outbreak, frequently telling reporters that it would simply go away. A changed president addressed the nation on Tuesday, one who appeared rattled by the scope of death and suffering the government’s scientists foresee.

“This is going to be a painful two weeks,” Trump said. “Our strength will be tested, our endurance will be tried.”

The president’s tone has turned markedly darker this week, after the latest projections over the weekend propelled him to abandon his ambition of re-opening parts of the country on Easter.

“We’re going through the worst thing that the country’s probably ever seen,” Trump said.

Deborah Birx, the top public health official coordinating the coronavirus task force, revealed the data — the same information that propelled Trump to retreat from ambitions to urge Americans back to work by Easter. She cited an estimate that U.S. deaths would be between 100,000 and 200,000 even with the most stringent mitigation measures in place.

During the briefing, a slide was displayed showing one projection where even with efforts by communities to mitigate the virus, deaths could reach as high as 240,000.

Trump said he envisioned some of the practices Americans have adopted — such as refraining from shaking hands — as lasting “long into the future.”

Birx and Anthony Fauci, the leading scientists on the White House coronavirus task force, have said that several public studies bolster their belief the virus could exact an even greater death toll in the coming weeks.

Trump has been widely criticized for downplaying the potential impact of the virus in the earlier days of its spread. In January, he said the U.S. had the virus “totally under control.” A month later, he said it was “going to disappear.” At the same time, he accused Democrats and the media of engaging in a “hoax” by criticizing his response.

Asked Tuesday about his dramatic change in tone this week, Trump said: “I’m not about bad news. I want to give people hope.”

The latest projection from the University of Washington’s Institute for Health Metrics and Evaluation predicts the death toll will dramatically spike in April from roughly 4,500 to almost 60,000 people — even with the isolation measures in place around the country.

The study indicates the pace of deaths will plateau in May and June and eventually total almost 84,000 by the first week of August.

By April 15, when the death count is expected to peak, more than 2,200 Americans will die of the disease per day, according to the model. Trump and Birx pointed to the University of Washington study on a call with governors on Monday.

The projections assume that “strong social distancing measures” and other restrictions will remain in place throughout the country, even though some large states, such as Florida, have declined to put in place stay-at-home orders that exist in New York, California, Washington and other virus hot spots.

The soaring rate of infections is expected to strain hospitals that are already struggling to care for infected patients and obtain desperately needed medical supplies. The University of Washington study projects that at the outbreak’s peak, roughly 220,000 hospital beds and 26,000 ventilators will be needed.

Trump said Tuesday that the federal government has 10,000 ventilators that it has held back in anticipation of a surge in cases over the coming weeks.

Trump compared the toll of the outbreak to the roughly 600,000 people who died in the Civil War.

“Had we not done anything we would’ve lost many times that,” Trump said, standing next to a graphic showing estimates that without any government intervention, as many as 2.2 million Americans could have died from the virus. “But we did something, and so its going to be hopefully way under that.”