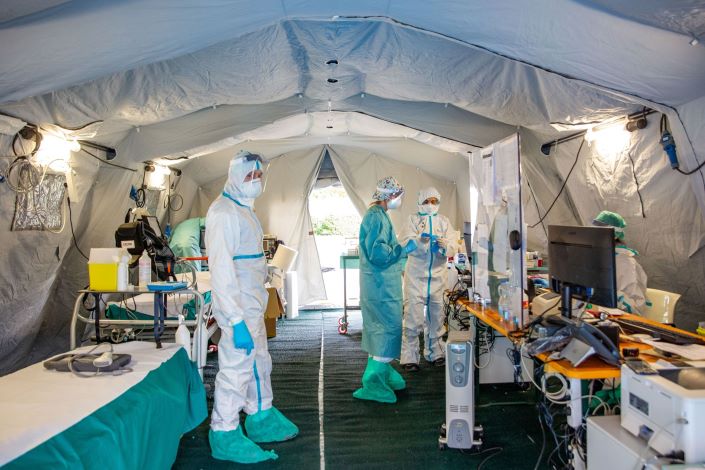 Stalls for patients are set up at a temporary hospital in the Jacob Javits Convention Center in New York on March 30. Photo: Bloomberg

(Bloomberg) — The new coronavirus has now infected 1 million people across the world, a milestone reached just four months after it first surfaced in the Chinese city of Wuhan. More than 51,000 have died and 208,000 recovered in what has become the biggest global public health crisis of our time.

When the virus was first discovered, doctors likened it to Severe Acute Respiratory Syndrome, or SARS, the illness that sickened 8,000 people mostly in Asia in 2003. Highly contagious, and appearing with little or no symptoms in some cases, Covid-19 has rapidly eclipsed all recent outbreaks in scale and size. Fewer than 20 countries in the world remain free of infection.

With some virus carriers presenting few outward signs of illness, and many countries unable or unwilling to conduct wider testing, the true number of global infections is likely higher — some say far higher — than 1 million.

The U.S. now has the most cases officially recorded globally with more than 234,000, according to Johns Hopkins University, which draws on a combination of data sources — from governments to the World Health Organization and local media — to feed its tallies. Next is Italy, with 115,000, the JHU data show. Italy has the highest death toll with almost 14,000 virus fatalities, followed by Spain.

With world travel paralyzed and millions of people under some form of lockdown as a result of government efforts to contain the spread, the health crisis has also become an economic one: The global economy is expected to shrink 2% in the first half of 2020. Business activity has ground to a halt in many sectors, with predictions the U.S. jobless rate could reach 30% in the second quarter.

Here’s how we got here:

Wuhan’s first known virus patient begins developing symptoms on Dec. 1, according to a paper published Jan. 24 in The Lancet medical journal. On Dec. 16, doctors at the Central Hospital of Wuhan send samples from another patient with a persistent fever for lab testing. Those results show a SARS-like virus and on Dec. 30 Ai Fen, the head of the hospital’s ER department, posts a picture of a lab report on Chinese social media, which is re-posted and circulated by several other doctors. They’re reprimanded by local police for “spreading rumors.”

At the end of December, the virus first appears in China’s tightly controlled state media, with reports government officials are probing dozens of cases of a mystery pneumonia in Wuhan. They don’t elaborate further. This is the first time that many within China and the outside world learn about the virus’ existence. By Jan. 3, Singapore, Hong Kong and Taiwan — Asian cities hit hard by the SARS pandemic — institute fever screenings at airports for arrivals from Wuhan, a key transport and manufacturing hub for central China.

The virus spreads beyond Wuhan

On Jan. 11, a team of scientists in Shanghai sequences the complete genome of the virus and publishes it on virological.org, an online discussion forum for epidemiologists. This gives researchers around the world a way to identify the virus in patients and infections are quickly found outside of Wuhan. Thailand confirms its first case on Jan. 13 and three days later one appears in Japan. Cases are reported in Beijing and the southern Guangdong province around Jan. 20, the same day Chinese infectious diseases expert Zhong Nanshan confirms on state television that the virus is spreading between humans.

Things escalate quickly from this point and — with questions being asked about delays in identifying and tackling the outbreak — China’s government starts ordering measures to control the disease’s spread. On Jan. 23, a day before the country’s week-long Lunar New Year holiday, Wuhan is placed under lockdown, with transport halted and restrictions on who can go in and out. The quarantine is expanded quickly to cities surrounding Wuhan and ultimately all of Hubei province, effectively sealing off 60 million people.

The World Health Organization declares the epidemic a global health emergency on Jan. 30, allowing it to coordinate responses among nations and recommend policy actions, including travel restrictions. The Philippines reports the first death outside of China: a 44-year-old man. A wave of infections starts to sweep Asia, and Hong Kong moves to shut schools and offices.

In Japan, more than 3,600 passengers on the Carnival Corp. cruise ship Diamond Princess are quarantined on board Feb. 5 amid concern they’ll spread the coronavirus on shore. The disease races around the vessel, ultimately infecting more than 600 passengers. At least six die. The situation was a harbinger, with the virus breaking out on ships from the U.S. to Australia, hobbling the global cruise industry and leaving passengers stranded as countries refuse to allow boats to dock.

South Korea explodes to record Asia’s second-largest epidemic after one patient sets off an outbreak within a secretive religious sect, but rapid testing brings the country’s outbreak under control within weeks, without lockdowns or businesses shuttering.

In China, the epidemic balloons to tens of thousands of cases, including a one-day addition of nearly 15,000 infections on Feb. 13 after officials said the methodology was changed. People in Hubei suffer as the local heath system collapses under the strain. Hospitals struggle with shortages of medical supplies and equipment, while health-care workers fall sick in grisly scenes that will come to be repeated weeks and months later, from Italy to Spain and the U.S. Li Wenliang, a young doctor who was one of the first whistleblowers at the Central Hospital of Wuhan, contracts the virus and dies, with government obfuscation over his death triggering outrage online.

France sees Europe’s first virus death on Feb. 14, a sign of an impending shift in the virus’s center. Europe soon starts recording new cases daily, at a volume beyond China at its peak. The explosive outbreak in Iran, where the virus emerges Feb. 19, gives a precursor to the struggles facing poorer countries in containing the virus.

Italy becomes the heart of Europe’s outbreak after the virus takes hold in its wealthier northern regions in mid-February. Italian towns are placed under lockdown from Feb. 22 and restrictions grow to encompass the whole nation on March 9. The death toll surpasses that in China as Italy’s aging population — the oldest in Europe — bears the brunt of the epidemic. In neighboring Spain, deaths grow to second-highest in the world. A state of emergency is declared on March 14.

The U.S. reports its first Covid-19 death on Feb. 29, but detections remain low for some time due to low testing levels. In mid-March, Hollywood superstar Tom Hanks says he has the virus, the same day the National Basketball Association cancels the rest of the season, bringing the reality of the virus to middle America. The World Health Organization officially declares a pandemic.

U.S. President Donald Trump declares a national emergency March 13, after earlier downplaying the risks of the outbreak. As testing is expanded, cases in the U.S. surge and New York State emerges as the next virus hot spot. The case tally surpasses Hubei province on March 30, as New York’s hospitals grapple with shortages of essential equipment like ventilators. Doctors and nurses who speak out over a lack of equipment to protect themselves face reprisal from hospitals.

Trump signs into law a $2 trillion stimulus package that provides roughly $500 billion in loans and other aid for major companies, including $62 billion for the airline sector. Middle and low-income Americans are promised direct payments while hospitals are slated to receive $117 billion in assistance.

A wave of jobs are lost in the U.S., as cities invoke stay-at-home orders and urge social distancing. On Thursday, the Labor Department says that over 6.65 million Americans applied for unemployment benefits the previous week, more than double the then-record 3.31 million reported in the prior week.

As Europe and the U.S. struggle to slow the virus’s spread, Asian cities which contained a first wave of infections from China begin seeing fresh cases, arriving through travelers from the West.

Data out of China — which the U.S. questions — show zero new infections on March 19, but the country also sees infections at its borders. Hong Kong and Singapore see their largest single-day case increases on March 20 largely from inbound arrivals. They start to tighten measures, imposing quarantines and modes of tracking new infections.

In India, the government orders a nationwide lockdown — the largest in the world at more than 1.3 billion people — as it races to stop the virus from taking hold among its vulnerable population.

Epidemiologists say that even after countries contain their first outbreaks, the virus is likely to return in later waves, as the flu pandemic of 1918 did. A growing awareness that a sizable group of infected people show no symptoms at all and are likely to spread the virus to others undetected sparks concern that the epidemic will evade control for months to come.